Since election night 2016, the streets of the US have rung with resistance. People all over the country have woken up with the conviction that they must do something to fight inequality in all its forms. But many are wondering what it is they can do. In this ongoing “Interviews for Resistance” series, experienced organizers, troublemakers and thinkers share their insights on what works, what doesn’t, what has changed and what is still the same. Today’s interview is the 58th in the series. Click here for the most recent interview before this one.

Today we bring you a conversation with Sister Simone Campbell, the executive director of NETWORK Lobby for Catholic Social Justice and leader of Nuns on the Bus.

Sister Simone Campbell: We’re really excited around here because in about 15 minutes, we’re headed up to the offices on the Senate side of Capitol Hill to deliver our letter signed by more than 7,000 Catholic sisters in the United States, urging the members of the Senate to vote “no” on the procedural motion to proceed on this awful proposal to cut Medicaid for the most vulnerable in our nation, and also to vote “no” on the substance of any bill that comes up.

Take us back a little bit to the history of Nuns on the Bus and this organizing that you’ve been doing for quite a few years.

Quite a few years! I’m getting old in the process [laughs]. Our organization was founded in 1971; we opened our doors in ’72 and we worked on health care all these years. In 2009-2010, we worked really hard on getting health care for people who were left out of health care in our nation. In that process, when it was coming up for a final vote in the House of Representatives, I wrote what’s called the “nuns’ letter” that was signed by 59 leaders of Catholic sisters’ communities, saying that the vote for the Affordable Care Act was a life-affirming vote. I actually wrote the letter in support of the Catholic Health Association, who had come out in support of the bill.

But between the time I wrote [the letter] and the time we got signatures back, our bishops had come out opposing the bill and then we released our letter in support of the bill — kind of bookending the bishops — and I’ve been told by many that they were able — with their Catholic faith — that they were able to vote for the bill because of our letter. I know 29 votes that we got. So, this is serious for us.

This time, we’re taking a letter not signed just by the leaders — though we have signatures from the Leadership Conference of Women Religious, Catholic Health Association, our organization and other organizations. This is a letter signed by the sisters themselves, and all calling on the Senate to care for the most vulnerable. It’s outrageous for us, as Catholic sisters who work with the most vulnerable in our nation, to see that 22 million people could lose health care because of this foolishness. That’s wrong. And so that’s the message that we’re carrying today: Stop it. Stop it now and get serious about fixing the problems that do exist.

This fight has now been going on, up and down, for the entire summer.

Oh my gosh, it is. Actually, it started in January, with the first effort in the House. So, we’ve been working flat out for the last seven months to get some sense into this conversation. This is wrong! 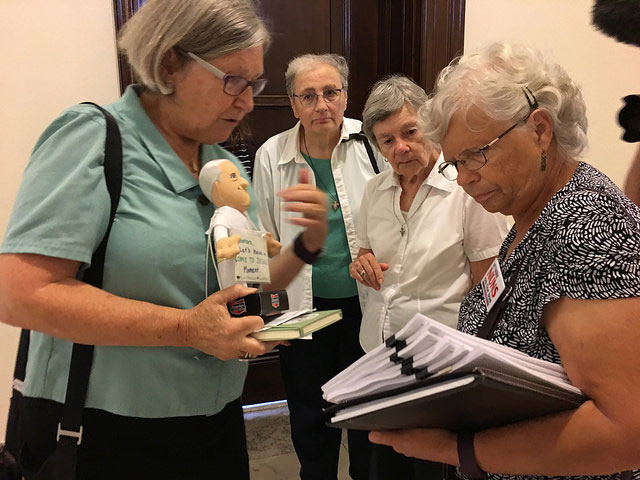 Talk a little bit about the work that you do. I think a lot of people who aren’t Catholic — who don’t regularly come into contact with Catholic sisters — don’t know why this is so important to you, to your organization, to the people who signed this letter.

Let me just give you an example. Two weeks ago I was in Arizona, in Tucson, at St. Elizabeth’s Health Center. And it is run by the hospital there that is sponsored by Catholic sisters. Sisters work on the staff and told me that their people got care for the first time when Arizona expanded Medicaid to cover the vulnerable.

Now, one of the sisters does mental health work, and she was saying so many people are terrified that they’re going to lose coverage and lose access to their life-saving care. That they’re seeing so many more stressed and traumatized people, and it’s that daily hands-on work that Catholic sisters do all over the country. It’s because we know the people, we know the worry, we know their families and we know as a nation that says we work for the general welfare — we know that this is the wrong way forward. It’s wrong in faith and it’s wrong in the Constitution, so stop it.

And of course, in addition to this particular health care bill, they’re trying to cut Medicaid through the budget, so it seems like this is still going to be an ongoing fight, even if the latest version of the bill that no one has seen doesn’t pass.

What can people do to support your work, to be part of this fight if they aren’t already?

They should look at our website, NETWORKlobby.org. You can see there’s a section that says “Take Action,” or there’s the “Issues.” Under “health care,” you can see what can be done. Or you can do the simple thing and call your Senate offices and say, “Vote no.” Some people say, “I’m sure my senator is OK on this.” I’m telling you, all the senators need to be called in the next two days, because they need to know that there is a groundswell of “we the people” saying “No! We will take care of the vulnerable people in our nation.”

It’s shocking to me, just shocking to me, that the richest nation on Earth — [which] prides [itself] on being problem-solvers — can’t care for vulnerable people. And the vast majority of the folks covered by Medicaid are either seniors, disabled, children and the working poor. A very small percentage of able-bodied folks are not working. Some Republicans have the idea that this is just a cash giveaway, something people don’t need, it’s wrong…. People need access to health care. So, call your senators, talk to your neighbors, lift up a voice, where we say, “We the people want to care for the most vulnerable.”

Advancing this anti-health, anti-life legislation is the wrong way forward. Catholic Sisters stand with our nation’s most vulnerable people. However, the Senate Republicans plan to rip away health care from millions in order to give tax breaks to corporations and wealthy donors. This is shameful.

Senator McCain said that advancing this bill is the way to begin a conversation. He is wrong. The proper way to debate and discuss proposed legislation is through hearings, markups and debate in committee first and then on the floor. Last-minute time-crunched negotiations and cliffhanger votes are not what is needed for our nation.

I pray that the Senate will stop this foolishness and instead, focus on bipartisan fixes to the problems with the ACA rather than attempting to weaken the parts of the ACA that are working, like Medicaid expansion. NETWORK suggests they start with our Ten Commandments of Affordable Healthcare if they are looking for inspiration.

I am so grateful for Senators Collins and Murkowski for their recognition that advancing this bill is bad for our people. I am also grateful to the 48 Democratic senators who continue to speak out for the health of our nation.

Share
Copyright, Truthout. May not be reprinted without permission.
Sarah Jaffe