This October, activists from Assata’s Daughters, For the People Arts Collective, Lifted Voices, and other groups locked themselves together in a human chain, halting traffic in downtown Chicago. The protest action, which took place on October 9, was a bold stand against the ongoing transformation of Chicago’s municipal police into a paramilitary. The Chicago Police Department (CPD) is a long-time perpetrator of racist violence and beneficiary of many revenue streams, including federal largesse, all earmarked for upgrading their officers’ capacity and appetite for violence. Through its Cook County branch, the Department of Homeland Security has over-inflated the already considerable budget for policing, which for this year amounts to a total of $1,452,492,621.

At the same time, funding for social services continues to shrivel. The city’s infrastructure for public education continues to suffer. As the month of October began, teachers were already gearing up for another strike against school closures and the prospect of working without a contract. Organizers with the Chicago Teachers Union were eventually able to bend Mayor Rahm Emmanuel’s arm, forcing his reluctant hand toward supporting public school students. This doesn’t change the fact that corporate interests receive more public money, schools continue to close and Chicago is yet another city enthusiastically militarizing its police. Moreover, justice has to be served for those reeling from the CPD’s often murderous abuse of Black and Brown communities. This is why discontent erupted when people learned that police were honing their skills at the Illinois Tactical Officers Association (ITOA) conference. 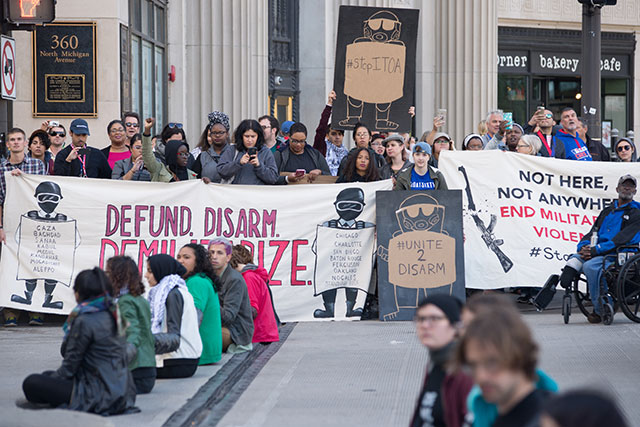 The ITOA conference is one of many tactical trainings and weapons fairs that occur across the United States. These trainings offer participating police departments a variety of training opportunities such as licensing officers to use “less than lethal” weapons like tear gas and tasers. No militarized training would be complete without assault weapon exercises. Officers also learn to operate alongside EMTs and emergency services, and are coached in police-specific protocols for handling mental health crises. This may at first seem benign, but a look at the syllabus for the New York Tactical Officers Association offers insight into how the moves to further militarize police reinforce vicious treatment of those with mental illnesses. Materials issued at police trainings actively discourage personnel from regarding the opinions of mental health professionals and urge officers to treat people with mental illness as threatening. What is especially concerning is that such attitudes overlap with organizational cultures among police that condone constantly killing Black people. These are reflected by the deaths of many, including Dontay Ivy in Albany, New York; Alfred Olango in El Cajon, California; and most recently, Deborah Danner in New York City. All three were Black people the police killed for exhibiting signs of mental illness.

This is only the beginning of the growing notoriety these tactical trainings have earned. Their operations take advantage of the many forms of austerity implemented in the US. For instance, these trainings have a reputation for preying upon economically vulnerable communities of color. This begins at the budgetary level in that many trainings get federal financial support. It has been confirmed that the ITOA conference receives this sort of support. There is an open question, however, as to whether or not these organizations are able to drain municipal resources in even more creative ways. Some have speculated that ITOA conference drills took place in schools closed by Rahm Emanuel, adding insult to injury.

Three years ago in upstate New York, residents of Albany’s Ida J. Yarbrough Homes were given a rude shock. The sounds of breaking glass, gunfire and stun grenades alerted them to what they would learn was an unannounced practice raid in public housing by police. Incidents like this, in which SWAT teams treat poorer racialized communities as props, are not uncommon across the US. Another example is Urban Shield, which used to take over downtown Oakland, California, until a coalition of the War Resisters League, Arab Resource & Organizing Center and Critical Resistance managed to push the weapons expo out of city limits. 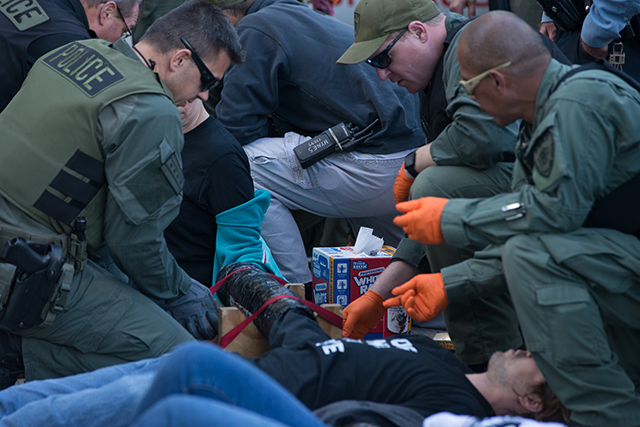 Trainings, like the ITOA conference, also provide a forum for cultivating the deeply rooted racial antagonism in the institution of policing. This year’s keynote speaker, Sebastian Gorka, stands out amongst Islamophobes. Playing off the jingoistic rhetoric of president-elect Donald Trump, Gorka’s vision for spying campaigns against Muslim communities merges the horrific imaginaries of Orwell and Kafka. In his vision, evidence is unnecessary for constant surveillance, and due process be damned. His cruel reasoning is something along the lines of their religion predisposes them towards violence, so act now and there are no questions to ask.

Of course, like many racists, Gorka is actually behind the curve. Had he been more attentive, he would have taken a keen interest in how the FBI set up Detroit-based activist Imam Luqman Abdullah with trumped-up charges and then arranged a sting operation that cost him his life. He would also be aware that the war on terror created a new political framework for intelligence agencies across the world to justify abducting people en masse, torturing and incarcerating them. Often, US agencies lead or collaborate with these initiatives. In the early 2000s, Pakistan’s Inter-Services Intelligence (ISI) made a tidy sum trading alleged terrorists for bounties from the CIA and British intelligence. These practices predate the United States’ globalized declaration of war, but the moral panic around Islamic fundamentalist terrorism helped create a contemporary rationale for disregarding human rights that has virtually traveled across the globe.

Though racist ideologies circulated by the likes of Gorka depart from the actual reality of policing in the “war on training,” they have an impact on the type of security tactical officer trainings aim to produce. Contrary to what these ideologues claim, cultivating officer bias against Muslim communities does nothing to halt terrorism. While it has been obvious to many — particularly those who have borne the brunt of this country’s foreign policy decisions over the last 15 years — US leadership has been slow to acknowledge that escalating violence from the military and law enforcement hardly lands even glancing blows on the root causes of terrorism. This violence instead has the opposite effect.

An internal study by the FBI from 2012 cut down the posturing of Islamophobes like Gorka. The bureau interviewed 100 agents who were tasked specifically with spying on Muslims in hopes of detecting “homegrown radicalization.” To begin with, agent testimony added to the cornucopia of evidence that shatters Islamophobes’ coveted link between religiosity and committing acts of violence. What is crucial is that these operatives consistently identified outrage sparked by violent US foreign policy — from so-called boots-on-the-ground invasions to airstrikes in Syria — that became political views justifying attacks in the US.

Such understanding obviously has not gained enough traction for US institutions to cease the war on terror. This is why there’s a dearth of widespread reflection as to why a US Navy Destroyer was positioned to fire upon targets in Yemen, why US drones have devastated that country, or why the US continued to back Saudi intervention. This is why fears about the consequences of blatant acts of war get almost zero consideration, while anxieties about racialized minorities make headlines and are even mentioned in presidential debates. This, in part, is why trainings like the ITOA conference occur. They are sustained ideologically, logistically and financially by organizations with a dual commitment to the war on terror and racist policing, particularly in urban environments. 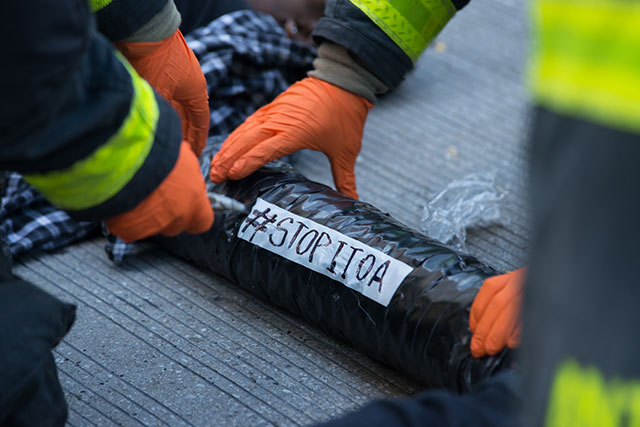 Corporate sponsorship is a crucial element in sustaining and growing the industry of police militarism. For this year’s conference, it was the generosity of the Safariland Group that allowed the world of racial policing in Chicago to overlap with the broader practices of war-making. Safariland, an arms manufacturer that produces tear gas used to put down protests across the world, describes itself as a “one stop shop” for police.

The other key revenue stream for these trainings in general (and the ITOA conference in particular) does not flow from the private sector. The Department of Homeland Security has a grant program, the Urban Area Security Initiative (UASI), allocating millions of dollars to qualifying city areas. This current of money joins a historical torrent of capital that the federal government bequeathed police looking to acquire paramilitary capabilities, which began with the oft-touted 1033 Program. Passed by Congress in the late 1990s, this program authorizes transfers of surplus military equipment to municipal law enforcement on request. The UASI, on the other hand, provides departments that meet qualifying risk factors with the capacity to pay for merchandise arms dealers like Safariland and Lockheed Martin typically sell to militaries, and also sponsors these trainings. In the case of the ITOA conference, both the sponsorship and arms allowance are processed by a clearinghouse known as the Illinois Law Enforcement Alarm System (ILEAS).

It is worth reflecting on the fact that the UASI grants amount to millions of dollars, and that they overwhelmingly go to police departments that hardly could be called strapped for cash. This fact sustains an overwhelming number of reasons to protest, especially considering the ideology of race-baiting that justifies this arrangement. Federal money has essentially been channeled into an infrastructure that monitors, controls and represses poorer communities that bear the brunt of racism, rather than providing economic support to poorer communicates and reviving the social and educational institutions needed to create a less violent future.

Share
Copyright, Truthout. May not be reprinted without permission.
Simi Kadirgamar