Paul Buhle talks to Truthout about his new collaboration and “graphic history of faith,” Radical Jesus, and its ties to current activism.

As with his 2011 book about Robin Hood, in his new collaboration and “graphic history of faith,” Radical Jesus: A Graphic History of Faith, retired Madison University professor, Truthout contributing author and producer of nonfiction comics Paul Buhle treats a famous topic in a wholly original and idiosyncratic way. Buhle corresponded with Truthout by email recently concerning his latest adventure.

What was the impetus for Radical Jesus?

A wonderful question because it compels me to look deep inside myself but also reflect on the publication process, a big and useful collaboration.

I left the Congregational church to join a youth group with a pool table, the Christian Youth Fellowship. There, circa 1960 (age 15 for me), I was free to propagandize for civil rights, play topical music for the other kids, etc. Ironically, the CYF’s parent church, Disciples of Christ, was quite conservative and Southern-based. Not long after, I realized that no churches were really committed to civil rights in the sense of doing something. And in the next few years, it became clear that even if they took a stand on race, they still supported the emerging war in Vietnam. I became unchurched (and remain so). 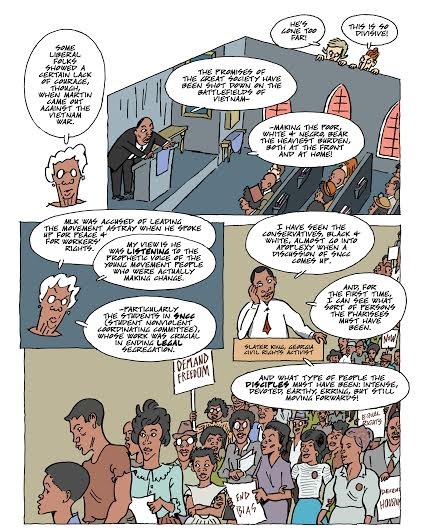 (Artwork from “Radical Jesus: A Graphic History of Faith”. Image by Nick Thorkelson)But Liberation Theology, emerging in the 1970s and ’80s, was a hugely exciting development, a stage of anti-imperialist energy in Latin America when the older revolutionary forces had faded. I took the role of propagandist or popularist in publications like The Nation, Village Voice and lesser places. The Catholicism did not mean much to me, but I was deeply impressed by Orbis Books, arm of the Maryknolls, and the activity of some priests and nuns around me in Providence, Rhode Island. Then, of course, Liberation Theology was drowned in blood, while purged from the church. Other important non-Catholic facets, like the left-leaning Caribbean Christian Church, also lost their political energy.

I got the idea of a comic some years ago, brought together a preliminary group but could not make it work. Artists Sabrina Jones (the most religious among us, a Quaker activist) and Nick Thorkelson were already on board when I persuaded a Mennonite activist (or she persuaded me) to go with Herald Press. That activist, Sandra Sauder, was decisive in making the book possible.

Working on it also set off some more distant memories in my fairly early childhood. My favorite pop culture item, by a long shot, was a four-record “album” (they looked like photo albums then) of Dennis Day singing all the parts of Johnny Appleseed, saga of the pacifist Swedenborgian mystic, real-life John Chapman, who walked the frontier in bare feet offering free apple seeds. My great aunt in Illinois claimed she had a tree “from Johnny’s seeds,” a nice story. 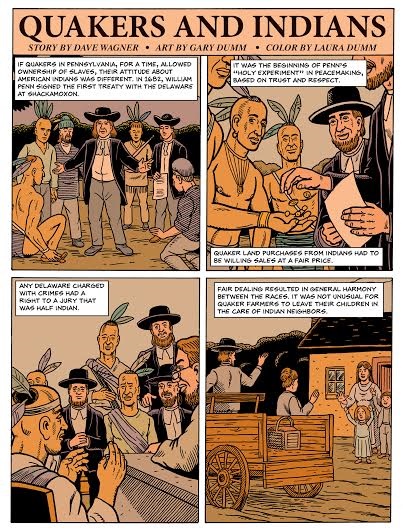 (Artwork from “Radical Jesus: A Graphic History of Faith”. Image by Gary Dumm)I might also say that Radical Jesus is the book, the kind of book, that I was looking for at age 15 without knowing it. Why? Because I had just begun to read books by Martin Luther King Jr. I have the feeling that I picked up his book Why We Can’t Wait from the same drugstore shelf as my science fiction books and the same shelf (actually a rack to spin around) as Listen Yankee!, the classic by C. Wright Mills. I was leaning as the political energy was rising around me.

On what basis were episodes chosen for the middle Radical Reformation section?

The book’s contents mark a compromise along many lines, subtle and less than subtle, compromises that shaped the book in certain ways but not in ways uncomfortable to me.

For instance, the German revolutionaries who carried through the revolution, overthrowing the existing powers of clerics and merchants (who rallied and slaughtered the rebels) do not get coverage here. Mennonites were, instead, heroic pacifists, “Quietists” who wished to withdraw from the bloody struggles and live out their lives peacefully and cooperatively. And these are the stories highlighted, along with the first stirrings of the Radical Reformation (the Wycliff Bible and Wat Tyler’s Revolt, Jan Hus’ martyrdom, etc). If I am not in total agreement with the Mennonite standpoint, I admire the courage of nonviolence in a violent world. And they are also very fine people. Part of my own legacy, at least imagined legacy, of Central Europe and the Reformation, is here as well. 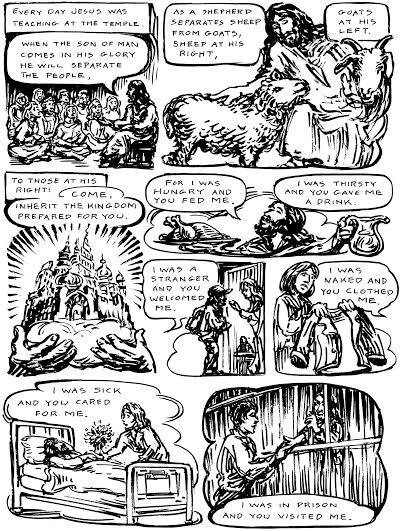 (Artwork from “Radical Jesus: A Graphic History of Faith”. Image by Sabrina Jones)Radical Jesus – as one reviewer notes – connects the dots from the Gospels to contemporary activism. How do you connect the dots from the radicalism of Jesus’ message and the various 16th century European Christian Reform movements to modern right-wing evangelism?

I am not theologian enough to grasp the inanities of right-wing evangelism except when it is explained to me that this began in the 19th century, a wholly de-socializing and depoliticizing doctrine that rapidly becomes political, in the most noxious sense.

The Christianity of the Conquistador Church in South America, or the Puritans in colonial America, was bad enough. Current evangelism is worse, because it is so completely remorseless and because it is aimed at demoralizing the poor. It is a great and dreadful success in a world beset by poverty and ecological degradation.

The strength of Radical Jesus is that the deeper messages, solidarity with the poor against the empire, are still very much available. Perhaps the book will find its intended audience – comic art books’ readership remains the under-30 crowd – and make a dent.

At any rate, the art is extremely strong, and in those terms as well, it is a unique volume. Gary Dumm joined Sabrina Jones and Nick Thorkelson in the work. Each artist is unique in story-telling, dialogue and art.

Share
Copyright, Truthout. May not be reprinted without permission.
Leslie Thatcher