Here is the sixth in our series of their stories and those of their families.

In 1980, [I] was part of a major lawsuit to improve prison conditions. I rallied to get other prisoners involved so Folsom Prison could be added to the lawsuit. I helped to bring blacks and Mexicans together to talk, ending years of racial violence. I attempted to help black correctional officers form a black union. I provided legal assistance to all races, challenging everything from their convictions and sentences to losses of good time, lack of medical care and other matters. For that, I am called the worst of the worst. 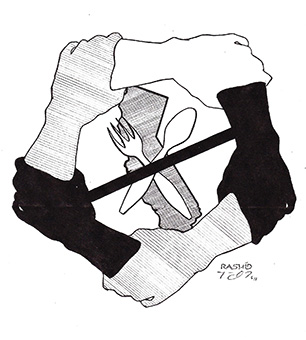 Drawing by Kevin “Rashid” Johnson. Johnson is currently incarcerated in Texas.When we arrived here, late, on the prison bus, pulling through the many prison gates, a guard stepped aboard to give us his speech: “This is your new home, Pelican Bay State Prison. Look to your right, left and behind you. See them trees in the hills? This will be the last time you’ll see a tree. Look at the ground. See the dirt? This will be the last time you see dirt of this earth.”

We walked into this building, which looks like an underground bunker but is aboveground. There are no windows to look out. There are no trees or grass anywhere in sight. There is no dirt from the earth to feel, no sun or moon to watch, no stars in the sky to count. We see no birds flying above. Only their sounds let us know they’re near. The little things in the outside world we once took for granted are now against prison rules – in here they’re called contraband.

Share
Copyright, Truthout. May not be reprinted without permission.
Paul Redd

Paul Redd is a plaintiff in the Center for Constitutional Rights lawsuit challenging long-term solitary confinement.