Occasionally, I wind up writing about topics that I don’t believe actually fit the focus of my overall work. This generally happens because an issue is crowding out other dialogue in the spaces I move in, or because a failure to speak means leaving a serious wound untended. This is one of those times.

A terrible tragedy played itself out in Paris. Twelve people were killed. Some were law enforcement officers, one was a maintenance worker, but most were employed by a satirical newspaper. In the wake of their deaths, many have felt compelled to lift up their work, as if supportive hashtags and the reposting of images that offend the religious sensibilities of others will somehow prevent the victims of this tragedy from having died in vain.

Allow me to save you the trouble: their deaths were senseless.

I detract nothing from their humanity by saying this. They did not deserve to die for their racist cartoons any more than the building’s janitor, whose name was Frédéric Boisseau, deserved to die for reporting to work that day. But I haven’t noticed anyone holding up his life and work as something that somehow has greater value because his life was taken. And for that matter, I don’t see anyone holding up the life and work of all the young people we lost in Chicago last year, deifying them to justify a sense of collective mourning.

That kind of deification is reserved for certain demographics, and most of our fallen children don’t fit the mold.

Many of their stories went untold in the media, but some of them made headlines. Did you try to defend what mattered to them? Did you take up the cause of assigning meaning to whatever got them killed? Did you change your Twitter avatar or Facebook profile picture to honor their loss?

Did you feel the need to take any action whatsoever to mourn their deaths?

If you average out the murder rate in Chicago last year, it breaks down to about one murder every nineteen hours. Seventeen of those people were killed by our own police. And yet, we didn’t pause every nineteen hours to lift up the names and work of those people. Why the disparity? And why is the freedom to speak, and to move, and to live so much more noteworthy when those who died made their living as curators of racism?

And while it’s not often that people take up the cause of our fallen young people, I do want to acknowledge the work of one group of people who did just that in 2014. We Charge Genocide responded to the death of Dominique Franklin, who was brutally murdered by the Chicago police, by creating their own front in the fight against police brutality. They compiled data, took their findings to the United Nations, and convinced the UN to point an accusing finger at the Chicago police, bringing a call for police accountability to a world stage. 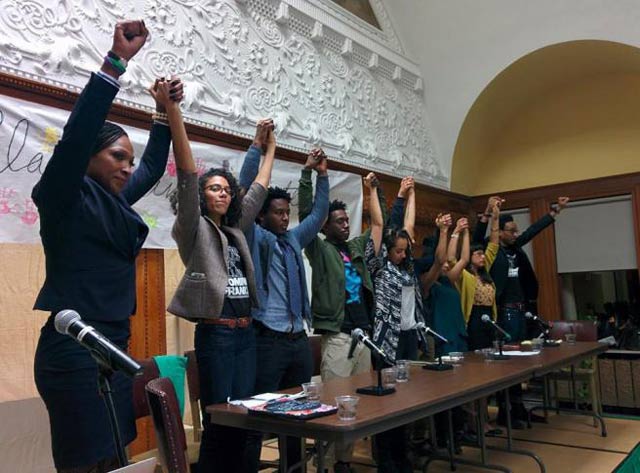 The We Charge Genocide Geneva delegation and W.A.P.B. Geneva delegate Monica James at a community report back about their trip. (Photo: Kelly Hayes)

That is what deriving meaning from loss looks like. And it didn’t happen because Dominique was perfect. Like any of us, he was flawed. And when he was pursued by police, he wasn’t doing anything heroic. Like many young people before him, he was attempting to steal a bottle of liquor. Petty theft isn’t an action we publicly praise in our society, but most would agree that it doesn’t warrant a death sentence.

Do you see how that works? Someone can do something you don’t feel the need to celebrate, and you can still believe that they had every right to live.

I could write all day about how our own culture embraces the same punitive attitudes that leave people everywhere ready to kill each other over harms large and small. I could spend the rest of the day explaining that most of the people reading this live in a country that more or less eats its own on the basis of such attitudes. I could talk about what I believe: that if we don’t create and embrace a more transformative means of addressing harm, we will be killing each other over cartoons, liquor bottles, and lost love until humanity meets its end. I could, but for now, I am going to step away from anything related to this topic, because I have so much work to do. And so do you. 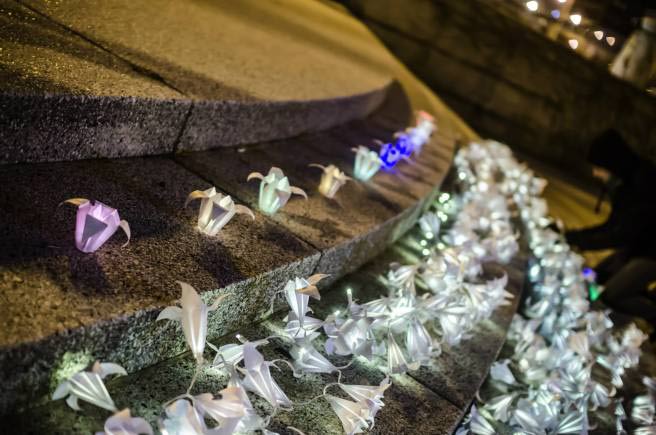 Pictured here: The December 17th “For Our Fallen” memorial and protest was one of the rare instances where a large group of people actually took the time to honor the memories of those our city lost to violence last year. Each paper lily represents a person who fell to violence, and each of the colored paper lanterns represents an individual who was killed by Chicago police. We Charge Genocide Geneva delegates were among the speakers at this event. (Photo: Sarah Jane Rhee)