Washington – The two explosions that killed three people and wounded more than 170 Monday in Boston were dramatic, the deadliest bombing in the United States since April 19, 1995, when a truck loaded with fertilizer blew up outside the federal building in Oklahoma City, killing 168. But the method of attack wasn’t particularly surprising to anti-terrorism experts: a homemade bomb that officials refer to as an IED, or improvised explosive device.

In fact, in the last six months, there have been 172 IEDs reported in the United States, according to a government count that an official revealed Tuesday in answer to questions about U.S. preparedness. The official shared the figures, which were gathered before Monday’s explosion, only on the condition that neither the official nor the official’s office be identified.

The official shared information in an email that indicated most American IED attacks were small: “Homemade fireworks, childish pranks and other such non-terror related activities.”

But the information also notes that American officials have long understood the threat, and includes a warning that’s been distributed to other agencies: “Expect IED attacks by Homegrown Violent Extremists (HVEs) and individuals to continue throughout the United States. High profile events will present additional targets for HVEs and other individuals.”

The bombs in Boston were more powerful and deadlier than any seen in the United States in years. Even so, initial reports from investigators indicate that they were made using gunpowder or black powder as an explosive, not higher grade and more dangerous explosives such as C-4, a military-grade plastic explosive.

The explosives were packed into two pressure cookers, an increasingly popular container for bomb makers from Pakistan to the United States. A pressure cooker bomb allegedly was discovered in the Killeen, Texas, hotel room of a soldier absent without leave from Fort Campbell, Ky., who later was convicted of plotting a 2011 attack on Fort Hood, Texas. 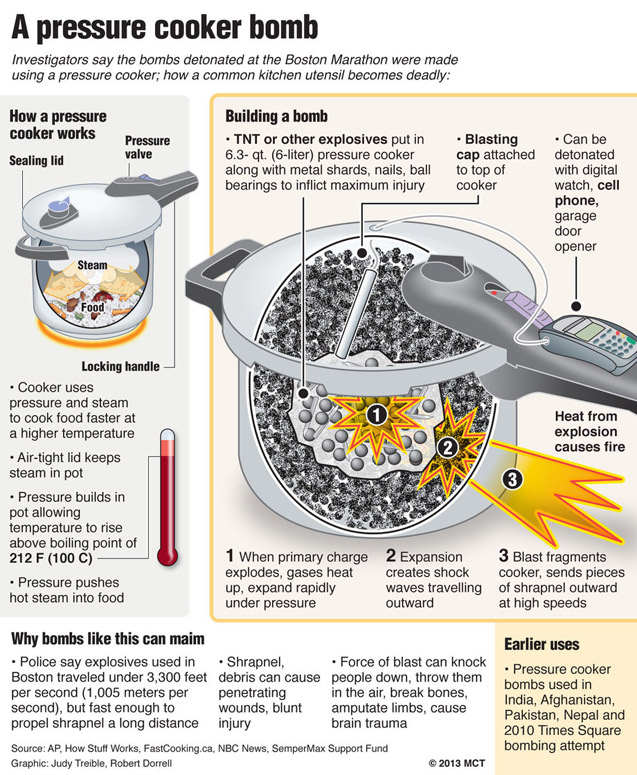 Officials say that with the growth of Internet instruction videos on bomb making, little stands between someone wanting to make a low-grade weapon and being able to do so.

A YouTube video titled “Easy Gunpowder Bomb” shows the viewer everything from extracting gunpowder from fireworks and bullets to setting a fuse. The video is narrated by a young man who answers a comment by noting that he was wearing shorts while filming the clip.

Another commenter asks: “Do you have video of it going off? How did it go?” The answer: It left a big hole in the backyard.

Officials say there are much more sinister bomb-making websites. One online video shows a young man demonstrating how to make a cellphone detonator for a bomb. Investigators think that Monday’s bombs were set off with timing devices.

The use of pressure cookers as bomb shells has become so common that some Internet sites call them “trendy.” Officials have said they think that Army Pvt. Naser Jason Abdo learned to make the pressure cooker bomb they say he intended to use at Fort Hood from instructions found in an al Qaida online magazine. Abdo was sentenced last year to two consecutive sentences of life in prison, plus 60 years.

Pressure cookers reportedly were used for bombs during the civil war in Nepal in the 1990s, and they were the method for a series of railcar bombings on July 11, 2006, in Mumbai, India, that killed more than 200 people.

Daniel Byman, a terrorism expert at Washington’s Brookings Institution, when asked about the attack in Boston, noted simply: “There’s no surprise on the type of attack – improvised bombs are very common.”

Over the past few weeks alone, authorities across the country have investigated several explosions, threats or suspicious devices involving improvised bombs.

In mid-March, the Associated Press reported that police had found 26 guns, thousands of bullets and dozens of high-capacity ammunition magazines at the home of Everett Basham of Santa Clara, Calif. Authorities also reported finding what they describe as a homemade “destructive device.”

Basham was charged with threatening to kill Sen. Leland Yee, a state lawmaker, over proposed gun-control legislation. A Democrat from San Francisco, Lee has proposed a law that would limit the sale of high-capacity magazines.

In rural western Pennsylvania, a man blew up himself with a device in his truck, leveling an acquaintance’s home. Prosecutors said the man had tried to commit suicide the previous summer with a 1,600-pound fuel bomb similar to one used to blow up the Oklahoma City federal building.

The day of the explosion, the man had faced charges of illegally possessing liquid ammonia for non-industrial or agricultural use, local newspapers reported. Some of the chemicals could be used to make explosives or methamphetamine.

In Arizona last Friday, authorities say, a package addressed to controversial Maricopa County Sheriff Joe Arpaio would have exploded if it had been opened, causing serious injury.

In an introduction to a White House report on the threat of IEDs that was released in February, President Barack Obama noted that it had been 20 years since the 1993 World Trade Center attack, when an explosives-laden van blew up in a parking garage, killing six people, and said a great deal of progress had been made in countering such weapons.

He added, however, that “We must not become complacent, but must continue to challenge ourselves and each other to be more effective against these threats.”

“IEDs remain one of the most accessible weapons available to terrorists and criminals to damage critical infrastructure and inflict casualties,” the White House report said.

“To better meet the IED threat at home, we will seek to incorporate lessons learned abroad,” it added.

James Clapper, the director of national intelligence, noted in March, however, that interest in using bombs continues. “Homegrown violent-extremist planning in 2012 was consistent with tactics and targets seen in previous plots and showed continued interest in improvised explosive devices,” he said.

IED ATTACKS IN THE U.S.

Share
© 2017 McClatchy-Tribune Information Services. Truthout has licensed this content. It may not be reproduced by any other source and is not covered by our Creative Commons license.
Erika Bolstad