UPDATED THRICE following the State of the Union address.

Ryan J. Reilly had the scoop at HuffPotonight. We’re about to get another bipartisan commission on voting reforms:

President Barack Obama will announce a bipartisan presidential voting commission to focus on improving the Election Day experience, The Huffington Post has learned from two sources outside the White House with knowledge of the plans.

The commission is one of a number of efforts the Obama administration is making to address the problems that plagued voting on Election Day 2012. The commission, which will focus specifically on Election Day issues and not broader voting reform, will likely be co-chaired by one Republican and one Democratic lawyer, according to one of the sources.

After the 2000 Presidential election fiasco, a bipartisan blue-ribbon commission headed by former Presidents Jimmy Carter and Gerald Ford was created by Congress. The commission offered reforms that ultimately helped lead to the disastrous Help America Vote Act of 2002. That bill, among other things, offered some $4 billion in federal money to states in order to “upgrade” to computerized voting systems. Those same systems, using proprietary hardware and software from private vendors, tally votes in secret and continue to fail in election after election even today.

After the 2004 Presidential election fiasco, a private bipartisan commission was created, as The BRAD BLOG was the first to reveal, by high-level Republican operatives and former Bush/Cheney officials calling themselves the American Center for Voting Rights (ACVR). The private commission, formed in secret, was headed by Carter and longtime Bush family friend James A. Baker III, the man who took Bush’s 2000 fight to keep ballots from being counted in the state of Florida all the way to the U.S. Supreme Court. The inclusion of Baker on the commission led to an uproar from Election Integrity advocates, a furious response at The BRAD BLOG from the commission’s Executive Director for our revelation of the scam, a letter from then Chair of the U.S. House Judiciary Committee Rep. John Conyers (D-MI) stating his “strong opposition” to Baker’s presence on the commission, and then a guest-blog from Conyers himself, here at The BRAD BLOG.

As Conyers noted at the time, and as the sham Baker/Carter commission’s report ultimately showed, the private commission was created in order to lay the groundwork for polling place Photo ID restrictions down the road. “Make no mistake about it,” Conyers wrote here at the time, detailing his belief that the commission’s push for Photo ID restrictions was “more of the same old Ken Blackwell-style Republican electoral dirty tricks, where Democratic voters are deliberately disenfranchised so that Republicans can win elections.”

While the privately created Baker/Carter commission was meant to appear similar to the official Ford/Carter blue-ribbon commission (Ford was ailing at the time of the second commission, so was replaced with Baker), we can only hope that whatever new commission President Obama has in mind won’t end up with the same “dead-on-arrival” recommendations as the ones from Baker and Carter. Though those recommendations were roundly criticized at the time, they are still cited today —- as if they were official recommendations —- by Republicans hoping to disenfranchise legal American voters through new restrictions on voting.

UPDATE: Reilly at HuffPo had it right. The President announced his call for a new commission during his State of the Union address tonight…

We must all do our part to make sure our God-given rights are protected here at home. That includes our most fundamental right as citizens: the right to vote. When any Americans, no matter where they live or what their party, are denied that right simply because they can’t wait for five, six, seven hours just to cast their ballot, we are betraying our ideals. That’s why, tonight, I’m announcing a non-partisan commission to improve the voting experience in America. And I’m asking two long-time experts in the field, who’ve recently served as the top attorneys for my campaign and for Governor Romney’s campaign, to lead it. We can fix this, and we will. The American people demand it. And so does our democracy.

Relatedly, near the end of his speech, Obama told the story of Desiline Victor, who was a guest of the First Lady’s at the speech…

We should follow the example of a North Miami woman named Desiline Victor. When she arrived at her polling place, she was told the wait to vote might be six hours. And as time ticked by, her concern was not with her tired body or aching feet, but whether folks like her would get to have their say. Hour after hour, a throng of people stayed in line in support of her. Because Desiline is 102 years old. And they erupted in cheers when she finally put on a sticker that read “I Voted.” 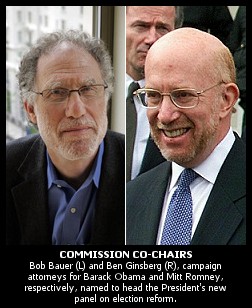 LATER UPDATE: Oy. Swift voting or Swift Boating?! Reilly files a new article at HuffPo detailing who will head up this commission:

Bob Bauer, former general counsel for the Obama campaign, and Ben Ginsberg, former top election lawyer for Romney’s 2012 operation, will lead the commission, a senior administration official confirmed. This isn’t the first time the duo has worked together: They previouslynegotiated the terms of the televised debates between their respective candidates.

Ginsberg is best known for his central role in the 2000 election, when he represented former President George W. Bush. Since then, he’s been a key GOP recount attorney, representing former Republican Minnesota Sen. Norm Coleman in the aftermath of his race against Democratic now-Sen. Al Franken in 2008.

Bauer, Obama’s former White House counsel, successfully fought to force the state of Ohio to restore early voting for all registered voters last year when he worked for Obama campaign.

The BRAD BLOG’s legal analyst Ernie Canning, in comments below, reminds us that Ginsberg, in addition to representing Bush/Cheney in both of their campaigns, “also doubled as the legal adviser for the Swift Boat Veterans for Truth” in 2004.

Indeed he did. At least until his work with the Swift Boaters came to light, and he was finally forced to resign from the Bush/Cheney campaign. The Swift Boat group was, at the time, established as a 527 political action group and was not supposed to be coordinating with campaigns. Their attacks on John Kerry, with Ginsberg advising them while a member of the Bush/Cheney campaign, was a very serious conflict of interest and perhaps a violation of the law.

Of course, that didn’t keep either Norm Coleman in 2008, or Mitt Romney in 2004, from hiring him again, of course. And, apparently, it hasn’t kept Barack Obama from tapping him to co-chair a commission on election reform.

So the man who worked with Baker to develop the strategy to keep votes from being counted at all in Florida in 2000, and who illegally advised a political action campaign on how to attack the man the campaign he was working for was running against in 2004, and who first fought to keep votes from being counted in Minnesota (beforeflip-flopping and demanding they all be counted once his candidate, Coleman, appeared to be losing) in 2008, and then went on to represent Romney in 2012 when his fellow GOPers were passing laws to keep legal voters from being able to cast their votes at all —- is now slated to head up Obama’s new commission on voting reforms. That oughta work out great!

On the other hand, as Reilly goes on to report:

The White House said Tuesday night that the new Presidential Commission on Election Administration would focus on “common-sense, non-partisan solutions” and “develop recommendations for state and local election officials to reduce waiting times at the polls and improve all citizens’ voting experience.”

It will address voters’ experience at the polls and will take input from customer service experts. The commission will also make recommendations to improve the voting experience of members of the military, overseas voters, voters with disabilities, and voter with limited English proficiency.

Here’s the official fact sheet from the White House [PDF] describing the purpose and goals of the new “Presidential Commission on Election Administration.”

So can Ginsberg’s damage to the process of election reform be limited? We’ll see. But it’s shameful that anyone would even think of using a guy like Ginsberg on a legitimate election reform panel in the first place.

Voting rights groups appear split on the voting commission. TheBrennan Center for Justice called it “an important step, focusing on improving the experience of voters.” But the normally mild-manneredLeague of Women Voters sharply criticized the idea: “we were surprised and disappointed that the President did not suggest bold action to ensure that every American citizen can exercise the right to vote. Setting up a commission is not a bold step; it is business as usual. The President could have done much better by pointing to real solutions like that in legislation already introduced on Capitol Hill to require early voting, set limits on waiting times, provide for portable voter registration and set up secure online voter registration.”