Heads-up, veterans of the nuclear freeze movement in the United States, the anti-Euromissile campaigns in Western Europe and the various anti-nuclear weapons efforts in New Zealand, Australia and Japan. Incoming.

We spent much of the 1980s resisting Ronald Reagan’s new Cold War and his new nuclear weapons of all shapes and sizes. We pushed back against his giant “defense” budgets and countered his harrowing rhetoric. We knew Star Wars was a scam and the MX missile a danger. We grimaced at his appointments to key policymaking positions and scoffed at his insincere arms control efforts.

In the end, we prevailed (after a sort). We get much of the credit for preventing planetary incineration that seemed frighteningly close at the time (Gorbachev deserves some, too). Professional activists, plowshares heroes and a handful of stalwart others stayed in the anti-nuke trenches. Although nuclear weapons were not abolished with the end of the Cold War, most of the rest of us nonetheless moved on to fight other evils and to work on one or more better world construction projects.

It’s time to return. President Obama released his fiscal 2015 budget March 4. Ready for this? It asks for considerably more money (in constant dollars) for nuclear weapons maintenance, design and production than Reagan spent in 1985, the historical peak of spending on nukes: $8.608 billion, not counting administrative costs (see graph below). The Los Alamos Study Group crunched the numbers for us. 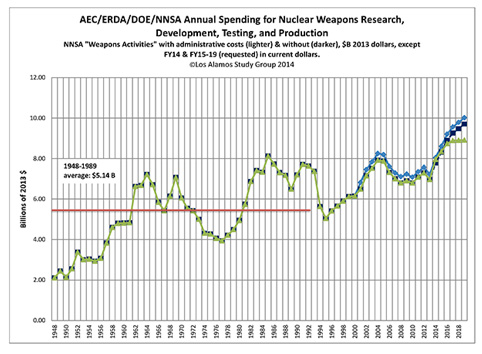 Next year’s request tops this year’s by 7 percent. Should the president’s new Opportunity, Growth and Security Initiative be approved, an additional $504 million would be available for warhead spending. The OGSI is $56 billion more than the spending agreed to in the December 2013 two-year budget (unlikely to pass given that it’s an election year, would be paid for by increased taxes on the retirement funds of the rich and reduced spending in politically dicey areas like crop insurance).

Increased lucre for the nuclear weapons complex maintains Obama’s inconsistency on the bomb. He wrote his senior thesis at Columbia on the arms race and the nuclear freeze campaign. Two months after his first inauguration, he uttered these words in Prague: “So today, I state clearly and with conviction America’s commitment to seek the peace and security of a world without nuclear weapons.”

The Pentagon’s 2010 Nuclear Posture Review promised to avoid “new military missions or … new military capabilities” for nuclear weapons (don’t laugh, you’d be surprised how imaginative those guys can be). 2011 was even better: Obama signed the New START Treaty. It limits the number of operationally deployed nuclear warheads to 1,550, a 30 percent decrease from the previous START Treaty, signed in 2002. New START also lowered limits on the number of launch platforms – ICBMs, ballistic-missile-launching subs and nuke-equipped bombers.

At the same time, his State Department refuses – first under Hilary Clinton and now John Kerry – to present the Comprehensive Test Ban Treaty to the Senate for ratification out of timidity over expected resistance (never mind that the United States essentially has figured out ways to circumvent the treaty’s spirit, if not letter; the Comprehensive Test Ban Treaty was once the “holy grail” for arms control and disarmament advocates).

That same State Department refrains – under Clinton and Kerry – from getting tough with Pakistan over its years-long obstruction of United Nations-sponsored negotiations over a global ban on the stuff needed to make bombs. (Pakistan is the country building them faster than any other. How about, “We’ll ground the killer drones in exchange for a fissile material cut-off?”) And Obama now wants to outspend Reagan on nuclear weapons maintenance, design and production.

Winding down nuclear weapons spending, and eventually abolishing the things (for which no negotiations are underway), has been the right thing to do since the first bomb exploded in the New Mexico desert in 1945. State Department support for the coup in Ukraine and the resultant saber rattling (echoes of August 1914?) make it as urgent as ever.

Share
Copyright, Truthout. May not be reprinted without permission.
Steve Breyman