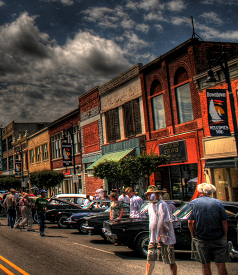 The big disconnect between corporate profits and jobs is likely to continue because America’s big businesses are depending less and less on U.S. sales and U.S. workers. Their big profits are coming from two sources: (1) growing sales in China, India, and other fast-growing countries, and (2) slimmed-down US payrolls.

Most Americans don’t have the dough. They’re still deep in debt, can’t borrow against their homes, and have to start saving for retirement.

The Dow Jones Industrial Average is rising because of foreign sales. General Motors is now making more cars in China than in the US, and two-thirds of its total sales are coming from abroad. When it went public last month it boasted that soon almost half its cars will be made around the world where labor is less than $15 an hour.

Wal-Mart isn’t doing especially well in America but Wal-Mart International is booming. And Wal-Mart is hiring like mad outside the US.

General Electric is keeping its payrolls down in the US but plans to invest half a billion dollars in Brazil and hire 1,000 Brazilians, and invest $2 billion in China.

Corporate America is in a V-shaped recovery. That’s great news for investors and everyone whose savings are mainly in stocks and bonds. It’s also great news for executives and Wall Street traders, whose pay is linked to stock prices. All can expect a banner 2011.

But most American workers are trapped in an L-shaped recovery. That’s bad news for the Main Streets and small businesses in 2011. It’s also a bad omen for home prices and sales, and everyone whose savings are mainly in their homes.

None of this bodes well for US employment next year. I expect the official unemployment rate to remain around 9 percent.

In other words, whether 2011 is a great year economically depends which economy you’re in – the one that’s rising with the profits of big business and Wall Street, or the one that will continue to struggle with few jobs and lousy wages.

Sadly, the next Congress is unlikely to do much to reverse any of this. Most Republicans and too many Democrats are dependent on corporate America and Wall Street. Their version of tax reform is to cut taxes on the wealthy and on big corporations, and either raise them on everyone else (sale and property taxes are already on the rise) or cut spending on programs working families depend on.

At some point, perhaps, the disconnect between America’s two economies will become so big and so obvious it can no longer be ignored. Progressives, enlightened Tea Partiers, Independents, organized labor, minorities, and the young form a new progressive movement designed to reconnect America.

One can always hope.