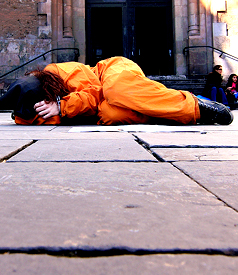 Ever-shifting rules, minders and a cloaked public record are some of the barriers Miami Herald reporter Carol Rosenberg said await those hoping to cover the military commissions at Guantanamo Bay, Cuba. Speaking at the National Press Club Tuesday night at an event titled “Banned at Guantanamo: A Freedom of the Press Event,” Rosenberg described an ever-tightening ring of access that has become even more onerous as of May, when she and three colleagues were banned from the military base for using publicly available information in their coverage. The reason: the military claims that she and her colleagues should not have identified one of the detainee’s interrogators.

As their justification, the military cited the Ground Rules, which govern reporter conduct at the base. Until May 4, according to a letter Rosenberg’s attorney David A. Schulz sent to the Department of Defense’s general counsel, those Ground Rules “applied only to information obtained at the Naval Base and in Military Commission proceedings.”

The twist: the person identified, Joshua Claus, spoke on the record with the Toronto Star about his role in the interrogation of Canadian Omar Khadr two years before Rosenberg wrote the article that got her bounced. Rosenberg explained that including Claus’ identity was not gratuitous, and that to exclude Claus from the May 4 coverage would have been inappropriate. The day’s story revolved around allegations that interrogators threatened Khadr with a “softening up” interrogation tactic. In his 2008 interview with the Toronto Star, Claus, who was found guilty of maltreatment of another detainee in 2002, asserted his innocence in the Khadr case. “That ‘softening up’ technique was the news of the day. You couldn’t tell it fully if you didn’t include Joshua Claus’ story” Rosenberg said.

At its most basic, Schulz said, the 2006 Military Commissions Act stipulates that the “proceedings of the military commissions are open to the public,” adding that in “very specific terms” Congress outlined only two reasons to deny access to the hearings: if the judge determines “national security could be reasonably … jeopardized” or if it could threaten the safety of the witnesses.

These two stipulations, however, Schulz said, do not embrace the unclassified records that by virtue of being unclassified should be available, but are not. For example: a hearing schedule or even something as routine as the equivalent of a civilian court docket, which the military calls a filing inventory. “By regulation that inventory is required to be unclassified,” Schulz said, adding “classified information does not go into that docket.” As with motions and other courtroom records, however, Schulz says military judges are the logjam because creating versions that exclude sensitive information is not automatic. Instead, Schulz says the judges hold the power for document review and often decide not to exercise it in a timely manner.

Schulz points out that this not a frustration of principle, but rooted in the core ability of a reporter to understand and accurately convey events. With everything under wraps, Schulz said there have been situations where prosecutors have given public statements referencing motions no one has been able to see “nobody even knows what they are talking about” he says. In the matter of the release of Australian David Hicks who was convicted of terrorism charges and later released from Guantanamo, court documents weren’t released until months after the fact, handicapping journalists from being able to understand how the plea deal that sent him back to Australia could have materialized. “There was a whole series of motions that the defense had made in that case, including motions accusing the prosecutors of misconduct and other motions that might have had some bearing on the willingness to make this plea deal” he said.

In short, “How can you cover a proceeding if motions get filed and you have no idea what’s been filed?” Schulz asked.

Compounding the access conflict, Schulz said, is that the Military Commissions Act assumes a judge will determine what reporters can attend, photograph or review, but this responsibility has been delegated to public information officers. In relaying her experiences at Guantanamo, Rosenberg said “a soldier stands over your shoulder, looks in your view finder and says ‘don’t you take that picture. I’ll delete it.'”

“You can’t delegate to anybody who is part of the Joint Task Force it’s a fundamentally illegal system” Schulz said.

In addition to depriving journalists of essential materials for reporting, Berrigan, who said his statements were his own and did not represent the views of his former employer, the access reporters have been denied has had a significant impact: what runs in the news “shapes public opinion and US officials’ positions and views, they all read the press,” he said, adding, “it forms conversations in the Pentagon and around the world.

If looking for a political divide, the panel noted that opaqueness vs. transparency is not a Bush vs. Obama administration face-off. The speakers said both have had a role in quashing access. In terms of record access, Schulz says “It doesn’t seem like anything has changed in the past two years.”

“This is a court like none other I’ve ever seen,” Rosenberg said in her opening remarks. “You can’t get up in the morning and stand on line to cover it, you can’t bring a lawyer to protest if there’s a closure … increasingly you can’t read the motions in advance,” she said adding, that in a recent policy reversal, “you can’t ask the lawyers during a break to clarify something.”