© 2023 Truthout
News
|
Members Who Supported Big Oil Have Received $38.6 Million From the Industry

The House of Representatives, which already holds the title of the most anti-environment House ever, today added another mark to the list — the Domestic Energy Production Act, H.R. 4480. The act is specifically designed to increase oil and gas development, with measures that block safeguards from smog and pollution and mandate drilling on public lands. The House Republicans passed this pollution and plunder energy package overrun by oil and gas industry interests, 248 to 163. This breakdown includes 229 Republicans and 19 Democratic members.

A ThinkProgress analysis of Center for Responsive Politics data shows how that oil and gas money overwhelmingly went to the votes for gutting safeguards from air pollution, drilling regulations and public lands protections: 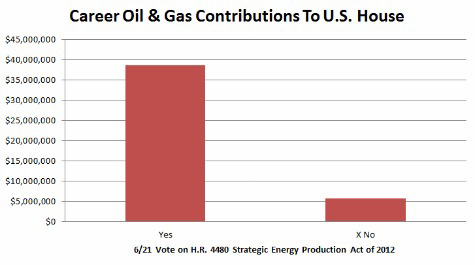 The oil industry has rarely been more influential in the House, based on lobbying and campaign contributions:

Republicans have said they are for all forms of energy, but the Domestic Energy Production Act passed today shows much different priorities. While the energy package included many provisions to encourage oil and gas, clean energy was included only twice. GOP leaders did not even permit debate over amendments to include support for renewables and other forms of clean energy.

Even as the White House has threatened to veto the package, passing this bill reaffirms the House Republicans’ dedication to “oil above all.”