Originally published at Observations on Credit and Surveillance

The credit card industry gets short shrift when it comes to history. It’s really not fair, and it’s a problem because it means a good portion of the lifestyle of ordinary Americans is not well-understood by historians. But the reason is that there just aren’t a lot of colorful personalities around credit cards; it wasn’t an industry invented in a garage by a group of plucky inventors. Credit cards were from the very beginning a product developed by faceless bureaucrats in extremely large oligopolistic industries fighting one another over who would control access to the American consumer. It’s an industry best studied through the lens of class, and not in the current style of narratives focusing on individual heroes.

Most of the early hearings on credit cards involve oil companies and antitrust. This is because oil companies, like airlines, large retailers, and restaurants and hotel associations were attempting to corner the market in consumer credit. While today credit cards are a bank product, banks didn’t take a majority of the business until the 1980s. It was primarily oil companies that got the credit card business going, in the 1930s. Standard Oil of California, for instance, did a mass mailing of 250,000 cards in 1939, using early ‘big data’ (well not big data really but using early direct marketing) techniques and experiencing identity theft and fraud. They did this not to make money on credit, which wasn’t seen as a profit center, but to sell more oil at higher prices. Early credit card operations were about getting Americans comfortable with driving cross-country, and being able to buy gas conveniently everywhere.

In October of 1939, the Temporary National Economic Committee in the Senate held a hearing titled “Investigation of Concentration of Economic Power”, with a focus on the petroleum industry (link here, be warned it’s a big file). Credit cards were prominently featured, because the major companies in the oil industry were using the large customer bases they had acquired as a bludgeon to control independent gas station owners. The majors were colluding, and using market power rather than direct ownership in gas stations to eliminate those who made rival products, like Quaker State and Pennzoil. Here’s a rep from Quaker State complaining to the Senate.

So it was the oil industry that got Americans used to credit cards. As for the collusion? Well that was clear as well. Here’s Charles Suhr, from Pennzoil, explaining how the oil majors controlled the industry through credit cards and fake independent leases of gas stations.

And then Suhr went on to show how the government was being deceived by claims from the oil guys barons that they didn’t own the gas stations at which Americans shopped. 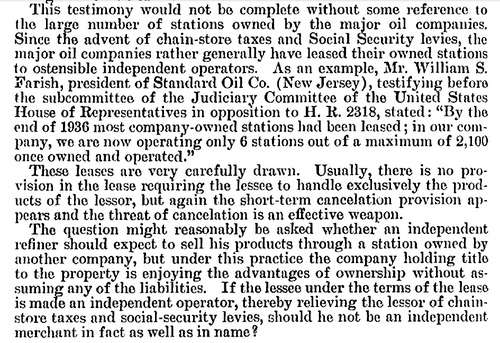 Today, the oil industry’s main problem is finding enough oil to refine and sell to plentiful car-dependent customers at high prices. In the 1930s, the oil industry’s main problem was finding enough car-dependent customers to which they could sell plentiful cheap oil. As scholar Tim Mitchell pointed out in his remarkable book Carbon Democracy, the problem for the industry was always too much oil, not Daniel Yergen’s absurd argument in “The Prize” about how oil was eagerly sought after. No, oil was always a question of structuring a market to generate profits when the natural contours of that market wouldn’t necessarily lead to much more than a cheap commodified standard good. Credit cards, as a mechanism to induce Americans to drive more while also extending the control of oil barons over the gas station market, were one answer.