Last week, 14 Wisconsin Senate Democrats inspired the nation when they decided to flee the state rather than allow quorum for a vote on a bill that would have decimated the state’s public employee unions and dealt a crippling blow to the state’s hard-working teachers, sanitation employees, and other middle class union members. Since then, tens of thousands of Wisconsinites have taken to the streets in even greater number than before the walkout in support of the fleeing legislators and in opposition to Gov. Scott Walker’s (R) anti-middle class agenda.

Inspired by the events in Wisconsin, thousands of Americans all over the country are taking action to battle legislation that would attack their labor rights, defund their schools, threaten their health and safety, and decimate the American middle class. Here are just some of the places across the nation that are taking part in this new “Main Street Movement” to defend and rebuild the American middle class:

– GEORGIA: Hundreds of workers demonstrated outside the Georgia capitol yesterday, declaring their solidarity with striking Wisconsin workers. Some demonstrators wore “cheesehead” hats, a clear reference to a cultural tradition in Wisconsin.

– IDAHO: Hundreds of teachers marched against legislation that would layoff 770 teachers and leave schools severely understaffed.

– INDIANA: In Indiana, House Democrats fled the state, preventing a vote on legislation that would enact “right-to-work” laws that would’ve crippled the right to organize. After the House Democrats took off, hundreds of workers and students marched into the capitol building and staged a massive sit-in, pledging not to leave until the radical legislation was withdrawn. Yesterday, Indiana’s Main Street Movement scored its first victory as Republican lawmakers withdrew the anti-union bill. Indiana Democrats are refusing to come back until right-wing legislators withdraw legislation to undermine the state’s public education system.

– MONTANA: More than a thousand “conservationists, sportsmen, firefighters, teachers, correctional officers and others” descended on the Montana capitol to protest against “unprecedented GOP attacks on public services and education and laws that protect land, air, water and wildlife.” Students carried signs that read “Keep Us In School,” protesting crippling cuts to the state’s education system.

– OHIO: In Ohio, thousands of ordinary Americans who rely on the right to organize to earn good, middle class incomes are facing off with Wisconsin-style legislation backed by Gov. John Kasich (R). Nearly 10,000 protesters demonstrated in Columbus, Ohio, gaining the support of former Gov. Ted Strickland (D-OH) and Rep. Dennis Kucinich (D-OH). So many demonstrators showed up that the Ohio Highway Patrol was ordered to lock the doors of the state capitol to stop more demonstrators from getting into the building.

– TENNESSEE: Hundreds of Tennesseans gathered to protest a bill that would completely strip Tennesee teachers of collective bargaining rights. “What you have right now is 300 or so of us, standing and asking the state legislature to focus on what the priorities are right now, instead of attacking working people,” said Mary Mancini, executive director of Tennessee Citizen Action. “If they listen to us, well then that’s great. … If not, I can see this thing growing.”

– WASHINGTON: 2,000 demonstrators in Olympia, Washington, marched against the state’s proposed budget cuts that would harm students and middle class Washingtonians and in solidarity with workers in Wisconsin. “If Scott Walker succeeds in ending worker rights in Wisconsin, the birthplace of public servants’ liberty, it could happen here,” said Federation of State Employees President Carol Dotlich.

ThinkProgress has put together a video compilation highlighting protests by ordinary Americans all over the nation to defend the middle class from this unprecedented assault. Watch it:

Even larger demonstrations are planned this Saturday, as thousands more Main Street Americans plan to take to the streets to protest the ongoing assault against the middle class. Moveon.org is organizing protests at every single state capitol in the country, aiming to “Save the American Dream.” Meanwhile, US Uncut, an activist group inspired by United Kingdom’s UK Uncut, plans to protest against American tax dodgers, asking why the rich in the country have been able to get off easy on their taxes while low- and middle-income Americans continue to be asked to sacrifice.

UPDATE To see what the war on the middle class that the Main Street Movement is battling looks like, see this chart of the income distribution from Mother Jones: 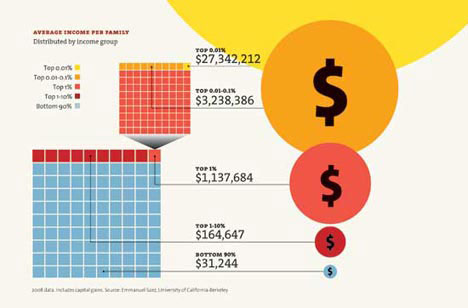