Who counts and who doesn’t count? We hear so much about the “middle class” but rarely about the plight of the poor. And of course we hear again and again that the wealthy are “successful” and the “job-creators” who shouldn’t be “punished” by being asked to give something back to the country that enabled their wealth. Conservative “market” thinking and Ayn Randian “the poor are losers” dehumanizing ideology* has become pervasive and dominant as we transition from one-person-one-vote democracy to one-dollar-one-vote plutocracy. In this plutocratic environment the national discussion of tax cuts for the wealthy saturates the corporate media, while the 44 million of us in poverty now are barely mentioned and count for little.

Yesterday the Census Bureau reported (NYT) that another four million people fell below the poverty line just last year, with trends showing it will probably grow. 44 million Americans — one in seven of us — are now trying to make it on $10,830; $22,050 for a family of four.

“We’re seeing more younger people coming in that not only don’t have any food, but nowhere to stay,” said Marla Goodwin, director of Jeremiah’s Food Pantry in East St. Louis, Ill. The pantry was open one day a month when it opened in 2008 but expanded this year to five days a month.

This chart (from the Census report) shows the trends. 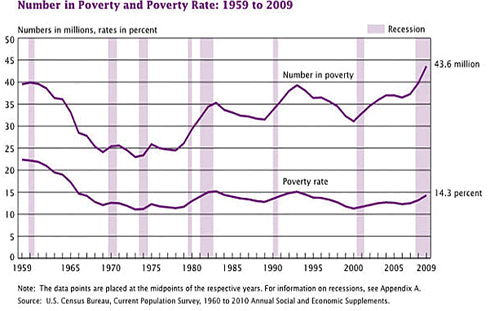 On top of this, the level of “severe poverty” has hit an all-time record level. At Angry Bear, All Time Record Level of Severe Poverty,

Even as poverty rises (because of conservative policies) the conservatives are attacking and weakening the safety net that keeps this disaster from getting even worse. They denigrate the idea of our government assisting citizens — taking care of and watching out for each other — as “spending” and “handouts.” They say that unemployment and poverty assistance “undermine the work ethic.” They say that helping the poor is “reaching into other people’s pockets.” Click through to read an example of what the Koch/Scaife/Walton (WalMart)/Tobacco/Oil/Corpation-funded Heartland Institute on “handouts”. Or click through to read a sample of what the Koch/ Scaife/Tobacco/Corpation-funded Freedomworks (one of the astroturf organizations behind the Tea Party) on “handouts.” Here is the Koch-founded/tobacco/oil/corporate-funded Cato Institute saying, about helping the people of New Orleans after Katrina, that government helping people is”coercion” (taxes are theft) and “it is important to remember that you can’t be compassionate with other people’s money.”

This is dehumanizing and degrading and listening to it at all dehumanizes and degrades all of us. And the result is right in front of our faces: poverty grows, poverty becomes more extreme, wealth concentrates at the top, society becomes more cruel, the country falls further and further backwards. We have lived through a decade of conservative policies, and from the NYTimes story on the increasing poverty rate,

“This is the first time in memory that an entire decade has produced essentially no economic growth for the typical American household,” Mr. Katz said.

The Money Is Going To The Top

The Census report notes that the highest “quintile” or fifth of income-earners received 50.3 percent of all income last year, the bottom fifth receive only 3.4%..

Conservatives in the Congress are blocking emergency extensions of unemployment benefits, jobs programs and other critical parts of the safety net that helps people in emergencies such as the conservative-caused financial collapse. So another indicator of human suffering is about to get even worse. Unemployment for the “99ers” is running out, many of them older, with no jobs in sight.

Only unemployment benefits are keeping another 3.3 million from the same fate. (Chart from Center for Budget and Policy Priorities)

According to the Census Bureau report, the number of United States residents without health insurance climbed to 51 million in 2009, from 46 million in 2008. Additionally in 2010 millions of unemployed workers who were covered by the stimulus’ COBRA subsidies are losing their coverage. There is no relief in site for years.

The Temporary Assistance for Needy Families (TANF) Emergency Fund from the “stimulus” expires at the end of this month. Steve Benen at Washington Monthly writes that the TANF program, “subsidizes jobs with private companies, nonprofits, and government agencies and has single handedly put more than 240,000 unemployed people back to work.”
So of course it needs to be renewed. But conservatives are blocking this. Benen writes,

The irony is, when those Americans lose their jobs, Republicans will say it was the failure of the stimulus. Their pathetic rhetoric will have it backwards — the stimulus created those jobs, and the GOP’s filibuster of an effective jobs program will throw these men and women out of work. In a sane political world, this would be a pretty big scandal…

It has been covered here extensively that the President’s “Deficit Commission” is talking about cuts to Social Security, which by law cannot borrow so it cannot contribute to the deficit, instead of looking at the tax cuts for the rich and military spending increases which caused the deficits. At the very time older Americans have had their retirement savings wiped out and many cannot find jobs and are taking early retirement, the commission is talking about reducing instead of increasing this vital program!

This is really all about jobs and wages. The best antidote to poverty is more employment and better wages. Just yesterday 300 economists issued a statement saying so. But conservatives continue to block all efforts to provide jobs and lift wages. Isaiah Pool wrote here yesterday, in Latest Senate Jobs Bill Tests The Limits Of Right-Wing Obstruction,

Senate Finance Committee chairman Max Baucus has introduced a bill today that is a frankly unadventurous mix of jobs initiatives and tax incentives, with a healthy dose of loophole-closings to make sure that it can be presented as revenue-neutral.

. . . Senate Minority Leader Mitch McConnell issued his “hell no, you can’t” edict … telling reporters that he’d lead a filibuster to make sure billionaires and millionaires paid not one dime more in earned income tax.

Such is the political environment in which Baucus drops his latest effort to move the jobs debate forward.

So every indicator of a society in terrible trouble — unemployment, poverty, severe poverty, balance of trade, concentration of wealth, foreclosures, health insurance coverage, you name it — is going in the wrong direction. And conservatives are proudly doing what they can to make it even worse! Why do we even listen to them at all?