The pace of growth slowed sharply to 142,000 in August. Coupled with downward revisions to June’s data, this brings the average rate of job growth over the last three months to 207,000. Between March and June, the economy added jobs at a monthly rate of 267,000.

In percentage terms, the motion pictures sector continues to be a big job loser, shedding 6,000 jobs in August — 2.0 percent of total employment. Jobs in the sector have fallen by 18.6 percent over the last two years. On the opposite side, health care added 34,000 jobs, the third biggest rise in the last five years. This is likely an anomaly that will be offset by weaker growth in the months ahead.

There is little evidence that the strengthening labor market is leading to wage pressures. Over the last three months, the average hourly wage has risen at a 2.3 percent annual rate, virtually identical to the 2.1 percent rate over the last year. In fact, almost no sectors show evidence of substantial wage growth. Only three sectors — mining, information, and leisure and hospitality — have seen hourly wage growth in excess of 2.5 percent over the last year. A 3.5 percent rate of wage growth is consistent with the Federal Reserve’s 2.0 percent inflation target (assuming 1.5 percent productivity growth). Only mining at 4.1 percent and information at 3.8 percent cross this threshold.

On the household side there was little new in the August data. The unemployment rate edged down slightly to 6.1 percent, but the employment-to-population ratio (EPOP) remained stable at 59.0 percent.

While the slower pace of job growth in this report is a surprise to many analysts, the stronger rate in the first half of this year really was not consistent with the rate of GDP growth that we have seen recently or is generally forecast for the near future. If the economy is growing in a 2.5 percent range, then we should expect to see job growth of around 1.0 percent, or 1.4 million a year. Unless the economy grows far more rapidly than is general expected, we should expect to see job growth well under 200,000 a month. 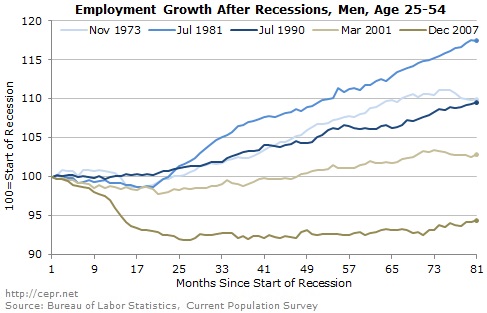 The remarkably weak GDP growth in this recovery is consistent with the extraordinarily weak job growth. While many have tried to explain the weakness on demographics, even if we restrict the focus to prime age men, employment is performing far worse than in prior recoveries.