© 2023 Truthout
Interview
|
Jilly Ballistic and the New Aesthetic of Dissent

Irreverence is a powerful tool, a tool that can combat the absurd and help you to stay sane when surrounded by absurdity. As one of the greatest minds of our time, Lewis Black once said: “Patriotism and religion are only good and only in balance if they have a sense of humor. And when they don’t, things go awry. All we have to do is look at our enemy” – he meant al-Qaeda – “that is a group that does not have a sense of humor. That’s what happens when you get all wrapped up in what you believe in and no one is going ‘haha,’ and then you’re screwed.”

And even if we are screwed, at least we can laugh at ourselves, and that’s the first step to becoming unscrewed, right?
Street artists in particular provide that mirror to reflect society’s absurdity back on itself. From Basquiat to Banksy, they provide those little messages hidden in plain sight that break the fourth wall of your day-to-day life and have the power to refocus your perspective, maybe help you look at advertising a different way or make you think a little bit more about whom the police are stopping to search and why. Even the simplest tag of a name on a wall becomes a sociopolitical statement, a reclaiming of private space for the public, an individual voice among the masses demanding to be noticed. When you add the guerilla factor of illegality to the equation, it is the boldness of the act of street art itself that has made it such a fertile ground for challenging social norms.
Hailing from New York City, the birthplace of modern street art, Jilly Ballistic is among the current wave making noise in the street art world. Using the imagery of the Internet error message that has become ingrained in our cultural lexicon, she has been transforming the subways of New York City and Brooklyn into a place where no mainstream advertising is safe and you might end up sitting next to a gas-masked, World War II-era chorus girl on the G train. 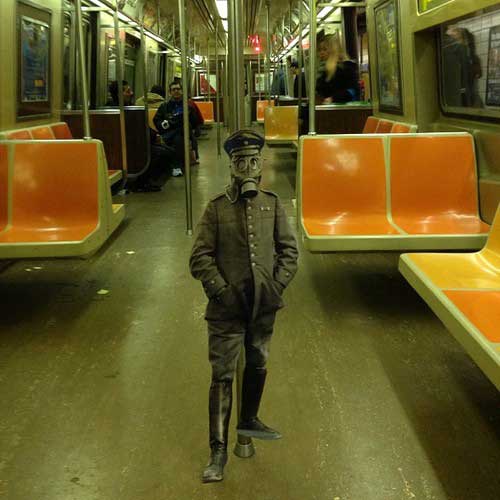 So this is probably a painfully obnoxious question to be asked as an artist, but for the sake of context, how did you start out as an artist?
I had no formal training as a visual artist, but as a fiction writer. A very broke fiction writer. So to promote the books I had written, I took to spray-painting excerpts on found objects in the street. Trash, basically. Discarded couches and broken stoves, for example. The concept went over well, and I sold books. But during that process, I came to love this public form of communication. I developed more and more ideas and went about ways of making them a reality.
Who or what were some of your early inspirations?
Jenny Holzer and Barbara Kruger are my knee-jerk responses. As is Nabokov. But New York City itself is a huge influence and inspiration. I was born and raised here, so I may be a little biased in saying it is a great environment, literally. Most of my work is site-specific and I enjoy working along with an environment most. I don’t intend to cover it. Whatever I paste up has a purpose for being there.
Is there a danger element to being a street artist? Is there a fear of getting caught?
It’s laughable that what I do is considered illegal. Looks like paper is still a very powerful thing! 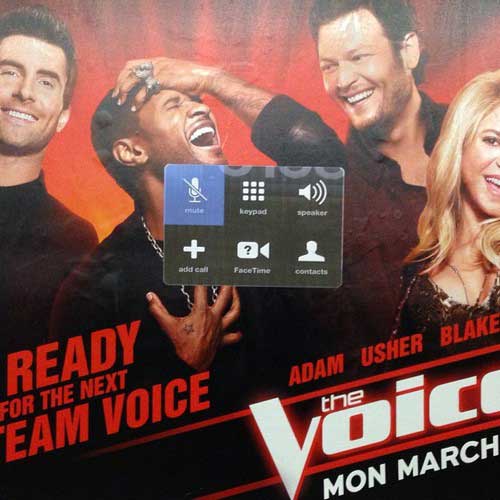 What do you feel are the differences between underground art and the more traditional concept of work made to be displayed in galleries or for commercial purposes? Do you feel that one is a more important or more legitimate form of expression then the other?
Speaking from my personal experience, I feel I have a lot more freedom in what I create when putting work underground. It doesn’t have to be pleasantly aesthetic; it doesn’t have to be made for someone’s taste. It’s not made to sell. The work underground is made for the underground. It can be as witty or disturbing as it needs to be, depending on where the work is placed.
New York City, especially the subways, has such a history of being the launching ground for graffiti and street art: what does the canvas of NYC mean to you?
That’s a good way of phrasing it, NYC as a canvas. That’s how I see a subway wall or the interior of a subway car. The broken tiles and pillars on a platform or train seats have so much possibility. Ads for a fifth remake of a movie that came out 30 years ago. New Yorkers want to respond to something like that. I want to capture that opinion. 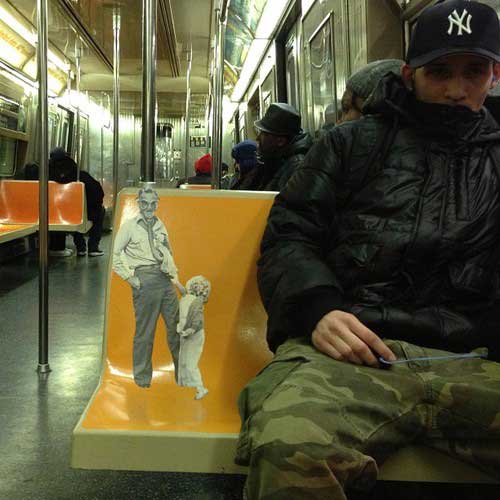 About your style. I’ve noticed that you seem to have two major themes, the World War II imagery with the gas masks and soldiers, and the software error messages: could you talk about that imagery? Why you chose them and what they symbolize?
Placing historical imagery in our present day, I’m hoping to not only highlight our past, but also show what, if any, progress we have made. For example, paranoia of the “other” or a sense of attack being imminent existed a generation or two ago, and it still does today. Anyone can be searched at any given time. Which decade does that sound like to you? As for the error messages, I wanted to create a way to respond to ridiculous ads surrounding people and say what we’re thinking. The technology-based prints I paste up are so familiar and recognizable; it’s a way to start the dialogue.

The piece where somebody tagged “police brutality” over the crime-watch line phone number and you added the “tag installed successfully” sticker – that one to me is one of the most powerful because it’s like an anonymous collaboration that expresses the sentiment of the people in the city. What is the state of police brutality in NYC? Is something like this a way of fighting back and/or calling attention to the problem?

“Stop and Frisk” and “See something, say something” are controversial police tactics in New York City. Average citizens are stopped based on appearance; a look of “suspicion.” This is not clearly defined and, as such, every cop is going to have their own definition of who is a danger to society. Of the hundreds of thousands of frisks, the vast majority of people stopped are black, Latino and people of color who have nothing incriminating on their person, nor [are they] doing any illegal activity. This puts stress on the relationship between the people and authority figures. Citizens think it’s harassment; the government thinks its preventative. The “tag installed” piece was a way to bring attention to one citizen’s concern. As of today, both have been removed. 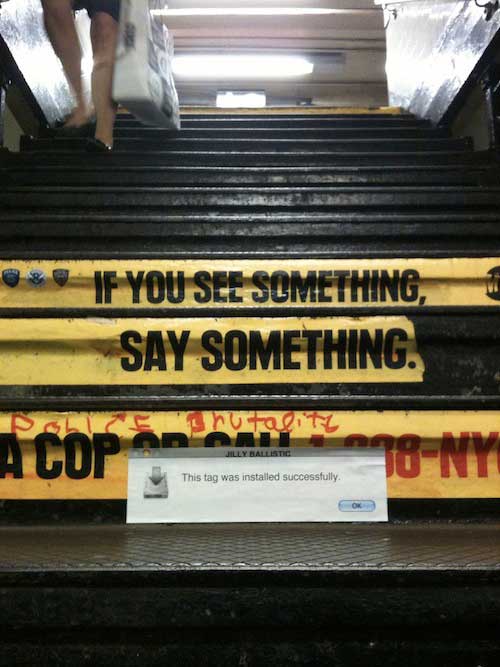 Your work also seems to have sarcasm and a humor to it; it’s not preachy or dark, but still makes people stop and think. Is there a particular message or theme that you are trying to get people to notice?
I suppose I want to get people to notice their environment, their world. Commuting day after day, you stop seeing it, you stop being a part of it, and you’re automated. Just by placing a 1914 soldier, a policy advisory or “digital” box on an ad can break someone out of that automation for a moment.
It’s surreal to answer this question while watching and reading developments on Boston. I’m not calling out anything or anyone in particular; I’m attempting to depict our cyclical nature: how today parallels the turn of the last century and the difficulty of true progress. Not technological, medical and scientific progress – which has been remarkable – but political and humanitarian progress. I’ve pasted up actual, unaltered images of children in military gear – gas masks and helmets – from the 1940s. And now I’m watching live MSNBC footage of an average American town completely locked down. 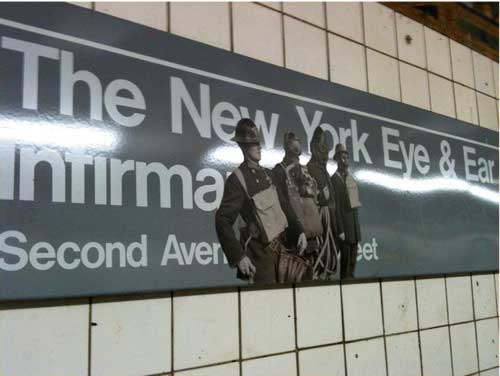 Female artists are historically so underrepresented that it seems like anything a female artist does becomes a feminist statement, whether or not the work itself is blatantly so. What is it like being a woman in the street art world? Have you found there to be challenges, or is it not even an issue or anything that’s ever come up? In that respect, do you feel that there are more opportunities to be heard and recognized as a street artist for women because of the accessibility of underground art vs. the traditional art world?

More often than not, at a show, I do find myself to be the one female artist on the list. Maybe one of two. If I happen to be asked to show work, I say yes because visibility is actually important. There are plenty of female street artists out there, with incredible skill, all bringing something new to the table. Curators and blog sites have to take the plunge and find us, and we female artists have to get out there too. Keep putting up work. And that goes for anyone in street art. It’s good for the movement as a whole.

Share
Copyright, Truthout. May not be reprinted without permission.
Rebecca Carter

Rebecca Carter is a freelance music journalist and photographer with work published in Relix Magazine, Blurt, AMP and Rockabilly Magazine. You can view her portfolio at www.wix.com/carterebecca/portfolio.

Truthout
Share
Even if we are screwed
Economy & Labor