Right now hundreds of thousands of young Chinese workers are laboring on iPhone 7 production lines. With these products set to launch in September, the final assembly is happening in a series of Foxconn and Pegatron factories across the country.

Foxconn is likely a familiar name to readers, as it became the focal point of international media attention in 2012 after widespread legal and ethical labor violations were revealed by This American Life and The New York Times. Pegatron, however, has received scant media attention, despite its growing role in Apple’s supply chain over the last four years. Unfortunately, the terrible conditions in which 100,000 young Chinese workers labor and live at Pegatron’s Shanghai factory are painfully familiar.

A new report published August 24 by China Labor Watch (CLW) demonstrates that the same legal and ethical violations that attracted media attention in 2012 continue unabated at Apple supplier factories today. In the case of Pegatron, CLW reports that conditions have actually worsened since 2015, despite years of audits commissioned by Apple, a membership in the Fair Labor Association, and promises from the company that it is committed to ensuring the safety and dignity of those who make its lucrative products.

CLW, a nonprofit organization dedicated to exposing labor rights violations in the Chinese factories that produce for global brands, revealed this through a study of workers’ pay stubs and interviews with workers at Pegatron Shanghai. The study found that workers continue to be forced to endure extreme overtime hours, working as many as 109 hours per month beyond their regularly scheduled workdays — three times the legal limit in China.

CLW found that the vast majority of workers within the maintenance department recorded more than 82 overtime hours in March 2016, while all 382 pay stubs examined from this department showed overtime hours in excess of the 36-hour-per-month legal limit for overtime. Included among these workers are student “interns” who are not legally allowed to work overtime, yet were found to log up to 80 hours of overtime per month.

When questioned about these practices, executives at Pegatron and Foxconn state that overtime within their facilities is optional. However, CLW’s research shows that high production quotas imposed by Apple, low base wages imposed by the factory, and harsh management techniques and denial of requests for time off combine to remove workers’ choice in the matter.

CLW’s investigation revealed that the base wage offered to workers by Pegatron, after deductions, is equivalent to just $213 per month, which is $117 less than the legal minimum wage in Shanghai. Even with all of the overtime hours, workers still earn $300 below the average monthly wage for the region.

These figures represent a decline in wages for Pegatron workers from 2015 to 2016, because the factory management made up for a government-mandated minimum wage increase by cutting welfare payments and forcing workers to contribute monthly earnings to the social insurance benefit that was previously paid by the company. So, though wages were legally raised from $1.85 per hour in 2015 to $2.00 per hour in 2016, workers’ real hourly earnings after deductions were just $1.60 per hour.

Other legal and ethical violations documented by CLW include daily unpaid labor of more than one hour, cramped and unsanitary living conditions in factory dormitories, and the failure to provide necessary protective equipment, which puts the health and safety of workers at risk.

Legal and ethical violations like these at Apple suppliers should ring familiar. You’ve read about them before, here and in other media outlets. What you might not realize is that they are happening a full decade after they were first brought to Apple’s attention.

On August 18, 2006, Britain’s The Mail on Sunday published a scathing report on conditions at Chinese factories where Apple’s iPod line was then in production. Investigative reporters found that workers were living 100-to-a-room at Foxconn’s Longhua facility in Shenzhen, then dubbed “iPod City,” and that they labored as much as 15 hours per day for very low wages. They found similar conditions at an Asustek facility in Suzhou, Jiangsu Province, which produced the iPod Shuffle. Laboring up to 12 hours per day, workers lost half their wages to the factory-imposed cost of accommodations and food.

These legal and ethical violations in Apple’s supply chain actually date even further back. In a report published in September 2005, SOMO, a Dutch nonprofit group that researches the practices of global corporations, documented trouble at Apple laptop suppliers Quanta Shanghai and Elite Computer Systems, located in Shenzhen. SOMO’s investigation documented excessively long work hours, insufficient wages, failure to protect the health and safety of workers, intimidation and humiliation of workers by management and an absence of grievance channels through which workers could safely raise workplace issues.

Since then, my own analysis of available data on labor incidents shows that the same types of violations — and others, including injuries and medical problems, worker exhaustion and emotional distress, the use of dispatch labor, and interference with third-party audits — have recurred year after year at Apple suppliers across China. Using all known reports by nonprofits and scholars who have documented labor conditions in Chinese Apple suppliers, including CLW, Students and Scholars Against Corporate Misbehavior, the Institute of Public & Environmental Affairs, SOMO, Good Electronics and a few others, I found that these violations, which occurred at 36 unique supplier factories over a period of 14 years, continue through the present.

In its annual supplier responsibility reports, Apple repeatedly claims that it works with troubled suppliers to improve workplace and dormitory conditions, and that it removes those who fail to improve from its supply chain. However, year-over-year repeat violations were found at 17 supplier sites owned by 10 companies with which Apple has contracted. Most recently, repeat violations have been documented at Pegatron-owned facilities from 2012 through the present, as well as at numerous Foxconn facilities through 2015.

In total, my study identified 76 unique cases, one for each year that legal and ethical violations were documented at any given factory. Over 14 years, the most common and consistent legal violations were overworking of employees and failure to protect worker health and safety — each present in more than three-quarters of all cases. Further, I found other serious violations in half or more cases, including harsh management tactics involving intimidation and humiliation of workers, insufficiently low wages, workplace injuries or medical problems stemming from an unsafe workplace, unpaid wages, severe and chronic exhaustion often coupled with emotional distress, and the lack of a union or other body to represent and protect the interests of workers. 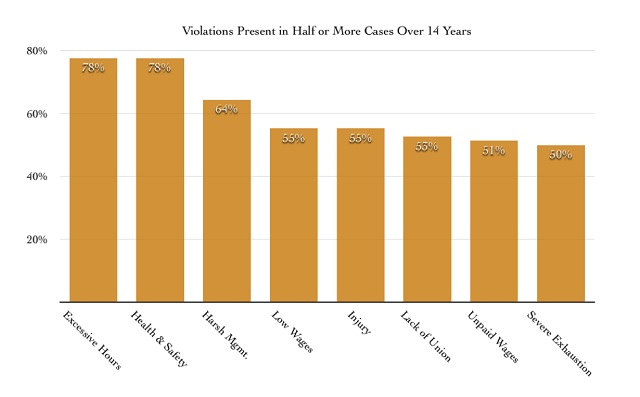 In addition, I found that in more than a third of the cases, workers reported that the factory had ineffective or nonexistent grievance channels through which to express complaints. In more than a quarter cases, workers suffered in poor living conditions. Also in more than a quarter cases, suppliers relied on “dispatch workers” who are economically exploited by both the factory and the employment agency that supplies them, and on student “interns” who are forced to work for low wages by their schools and local governments. These “interns” work as much as 80 overtime hours per month even though Chinese labor law prohibits overtime among student workers. Interference with third-party audits, through falsifying overtime documents or intimidating workers against speaking with auditors, was also common — I found it in 12 percent of the cases I examined.

These data show unequivocally that Apple is not effectively holding suppliers accountable for violations that breach Chinese law and the company’s Supplier Code of Conduct. Today, the same violations can be found at Apple suppliers as were present 14 years ago, calling into question the efficacy of the industry-wide practice of auditing.

What’s more, CLW’s Li Qiang asserts that Apple is actively “obstructing” positive change in the industry by squeezing suppliers to miniscule profit margins while simultaneously imposing production quotas that require round-the-clock factory operation. Due to Apple’s role as the smartphone sector’s profit-leader, Qiang believes that little will change in the industry until Apple changes its practices.