Barely 11-years-old and in the sixth grade of primary school, this student dreams of becoming a farmer in order to produce food so that the children in his community never have to go hungry. Josué Orlando Torres of the indigenous Lenca people lives in a remote corner of the west of Honduras.

He is part of a success story in this village of Coalaca, population 750, in the municipality of Las Flores in the department (province) of Lempira.

Five years ago a Sustainable School Feeding Programme (PAES) was launched in this area. It has improved local children’s nutritional status and enjoys plenty of local, governmental and international participation.

Torres is proud of his school, named for the Republic of Venezuela, where 107 students are supported by their three teachers in their work in a “teaching vegetable garden”. They grow peas and beans, fruit and vegetables that are used daily in their school meals.

Torres told IPS that he did not used to like green vegetables, but now “I’ve started to like them, and I love the fresh salads and green juices.” 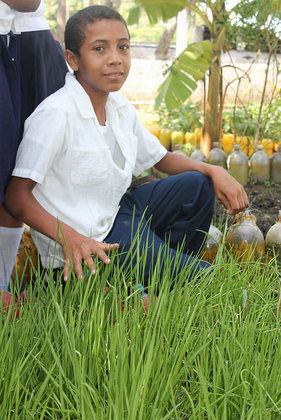 Josué Orlando Torres, an 11-year-old student, dreams of becoming a farmer to ensure that children like himself have access to free high-quality food at this school in the indigenous community of Coloaca, where a sustainable school programme is beginning to overcome chronic malnutrition. (Credit: Thelma Mejía/IPS)“Here they taught us what is good for us to eat, and also to plant produce so that there will always be food for us. We have a vegetable garden in which we all plant coriander, radishes, cucumbers, cassava (yucca), squash (pumpkin), mustard and cress, lettuce, carrots and other nutritious foods,” he said while indicating each plant in the school garden.

When he grows up, Torres does not want to be a doctor, engineer or fireman like other children of his age. He wants to be “a good farmer to grow food to help my community, help kids like me to be well-fed and not to fall asleep in class because they had not eaten and were ill,” as happened before, he said.

The 48 schools scattered throughout Las Flores municipality, together with other schools in Lempira province, especially those located within what is called the dry corridor of Honduras, characterised by poverty and the onslaughts of climate change, are part of a series of sustainable pilot projects being promoted by the Food and Agriculture Organization of the United Nations (FAO), and PAES is one of these.

The purpose of these sustainable school projects is to improve the nutritional status of students and at the same time give direct support to small farmers, by means of a comprehensive approach and effective local-local, local-regional and central government-international aid interactions.

As a result of this effort in indigenous Lenca communities and Ladino (mixed indigenous-white or mestizo) communities such as Coalaca, La Cañada, Belén and Lepaera (all of them in Lempira province), schoolchildren and teachers alike have said goodbye to fizzy drinks and sweets, and undertaken a radical change in their food habits.

Parents, teachers, students, each community and municipal government, three national Secretariats (Ministries) and FAO have joined forces so that these remote Honduran regions may see off the problems of famine and malnutrition that once were rife here.

A family production chain was developed to supply the schools with food for their students, who average over 100 at each educational centre, complementing the school vegetable gardens.

Every Monday, small farmers bring their produce to a central distribution centre, and municipal vehicles distribute it to the schools. 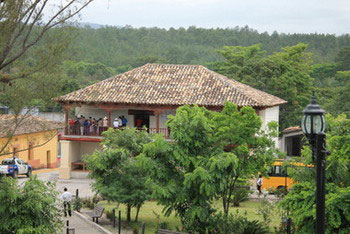 View of Belén, a town that is the head of a rural municipality of the same name amid the mountains of western Honduras, in the department (province) of Lempira, where a programme rooted in local schools is improving nutrition among remote indigenous communities. (Credit: Courtesy of Thelma Mejía)Erlín Omar Perdomo, from the village of La Cañada in Belén municipality, told IPS: “When FAO first started to organise us we never thought things would go as far as they did, our initial concern was to stave off the hunger there was around here and help our children to be better nourished.”

“But as the project developed, they trained us to become food providers as well. Today this community is supplying 13 schools in Belén with fresh, high-quality produce,” the community leader said with satisfaction.

They organised themselves as savings micro-cooperatives to which members pay small subscriptions and which finance projects or businesses at lowinterest rates and without the need for collateral, as required by banks, or for payment of abusive interest rates, as charged by intermediaries known as “coyotes”.

“We never dreamed the project would reach the size it is today. FAO sent us to Brazil to see for ourselves how food was being supplied to schools by the families of students, but, here we are and this is our story,” said the 36-year-old Perdomo.

“We all participate, we generate income and bring development to our communities, to the extent that now the drop-out rate is practically nil, and our women have also joined the project. They organise themselves in groups to attend the school every week to cook our children’s food,” he said. 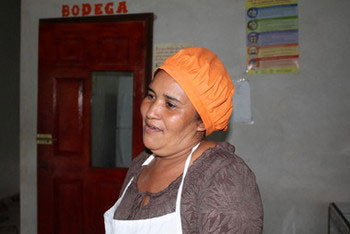 Rubenia Cortes, a mother and volunteer cook at the school in the remote village of La Cañada in the department (province) of Lempira, in western Honduras. They cook in a kitchen that was built by parents and teachers at the school. (Credit: Courtesy of Thelma Mejía)A 2012 report by the World Food Programmme (WFP) indicated that in Central America, Honduras had the second worst child malnutrition levels, after Guatemala. According to the WFP, one in four children suffers from chronic malnutrition, with the worst problems seen in the south and west of the country.

But in Coalaca, La Cañada and other nearby villages and small towns, the situation has begun to be reverted in the past five years. The FAO project is based on the creation of a new nutritional culture; an expert advises and educates local families in eating a healthy and balanced diet.

“We don’t put salt and pepper on our food any more. We have replaced them with aromatic herbs. FAO trained us, teaching us what nutrients were to be found in each vegetable, fruit or pulse, and in what quantities,” said Rubenia Cortes.

“Look, our children now have beautiful skin, not dull like before,” she explained proudly to IPS. Cortes is a cook at the Claudio Barrera school in La Cañada, population 700, part of Belén municipality where there are 32 PAES centres.

Cortes and the other women are all heads of households who do voluntary work to prepare food at the school. “Before, we would sell our oranges and buy fizzy drinks or sweets, but now we do not; it is better to make orange juice for all of us to drink,” she said as an example.

From Monday to Friday, students at the PAES schools have a highly nutritious meal which they eat mid-morning.

The change is remarkable, according to Edwin Cortes, the head teacher of the La Cañada school. “The children no longer fall asleep in class. I used to ask them, ‘Did you understand the lesson?’ But what could they answer? They had come to school on an empty stomach. How could they learn anything?” he exclaimed.

In the view of María Julia Cárdenas, the FAO representative in Honduras, the most valuable thing about this project is that “we can leave the project, but it will not die, because everyone has appropriated it.”

“It is highly sustainable, and models like this one overcome frontiers and barriers, because everyone is united in a common purpose, that of feeding the children,” she told IPS after giving a delegation of experts and Central American Parliamentarians a guided tour of the untold stories that arise in this part of the dry corridor of Honduras.

There are 1.4 million children in primary and basic secondary schooling in Honduras, out of a total population of 8.7 million people. Seven ethnic groups live alongside each other in the country, of which the largest is the Lenca people, a group of just over 400,000 people.