© 2022 Truthout
Op-Ed
In Europe, Great Depression Was Bad; This Is Worse

One thing everyone always says is that while this Lesser Depression may be bad, it’s nothing like the Great Depression.

But this is in part an America-centered view: we had a very bad Great Depression, and have done better than many other countries this time around. As Jonathan Portes, director of the National Institute of Economic and Social Research, points out on his blog, “Not the Treasury View,” the ongoing slump in Britain is now longer and deeper than the slump in the 1930s (a chart posted at notthetreasuryview.blogspot.com on Jan. 25 shows how far real gross domestic product was below its previous peak in various British recessions).

I believe that when I began criticizing the Cameron government’s push for austerity, some right-leaning British papers demanded that I shut up.
But the original critique of austerity is holding up pretty well, if you ask me.

Further thoughts on the observation that the current British slump has now gone on longer than the slump of the 1930s. Is Britain unique? 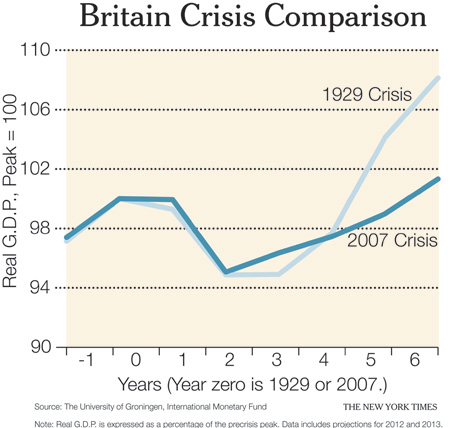 No, it isn’t. The N.I.E.S.R. has developed a monthly G.D.P. series for Britain, which lets it use real-time data for the comparison. I can’t replicate that, but I can use the Maddison historical data from the University of Groningen in the Netherlands and data from the International Monetary Fund — including projections for 2012 and 2013 — to do some comparisons. When you do this for Britain, as seen on the chart above, the worse-than pops right out (I use annual data; year zero is 1929 or 2007, and real G.D.P. is expressed as a percentage of the pre-crisis peak in each case). Italy is below. 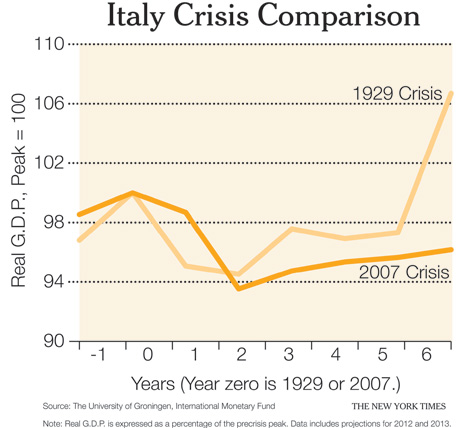 France and Germany are doing much better than in the early 1930s — but then France and Germany had terrible, deflationist policies in the early 1930s. (It was the Brüning deflation, not the Weimar inflation, that brought you-know-who to power). With two of Europe’s big four economies doing worse than they did in the Great Depression, at least in terms of G.D.P. — and that’s three of five if you count Spain — do you think the austerity advocates might consider that maybe, possibly, they’re on the wrong track?

Share
Paul Krugman
Truthout
Share
Credit: De Angelis. One thing everyone always says is that while this Lesser Depression may be bad
Economy & Labor