Cat Island, off the Gulf Coast in Louisiana’s Plaquemines Parish, was home to a vibrant bird rookery inhabited by brown pelicans, seagulls, spoonbills, and egrets before BP’s Deepwater Horizon oil disaster. Five years after the largest oil spill in American history, the barrier island has just about disappeared.

Despite ongoing efforts by former Plaquemines Parish coastal zone manager PJ Hahn to restore the island, only the needed building permits and an engineering plan have been completed. 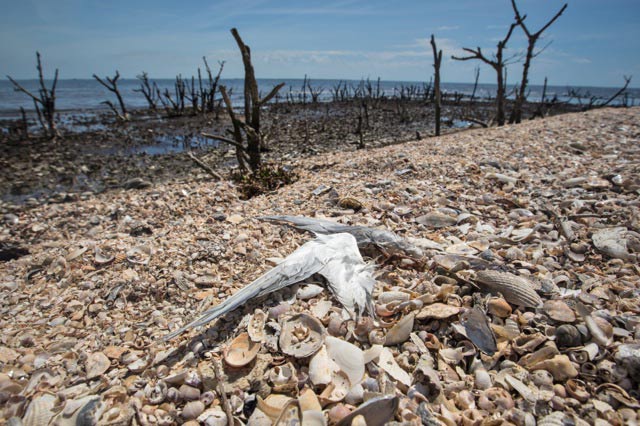 He thought that the restoration of the island was a no-brainer since, while much of the oil spill’s damage was underwater and invisible, the damage to Cat Island was easy to prove. According to Hahn, not only would the island’s restoration be necessary for the birds, but it would provide a great public relations move for anyone who helped in the process.

At the time of the spill, Cat Island was approximately five and a half acres, covered by a dense forest of black mangrove trees which were occupied by nesting birds. All that remains now are two small strips of land — less than an acre combined. Mangrove stumps jut out from the broken, shell-covered sandy remains of the island, at times fully submerged during high tide.

“The island was a treasure and it deserves to be restored,” Hahn told DeSmogBlog. He continues to advocate for the restoration project he spearheaded.

“It’s a hard sell for many since the island doesn’t serve as storm protection like other barrier islands that are in the process of being restored since the spill,” Hahn said.

But Cat Island and other small barrier islands, some of which have completely eroded since the spill, were perfect bird habitats because they were free of predators. Hahn believes the $6 million restoration price tag is a good investment, one that will pay for itself in dollars generated by the tourism industry. “Bird watchers from all over will come to visit the island,” he said. 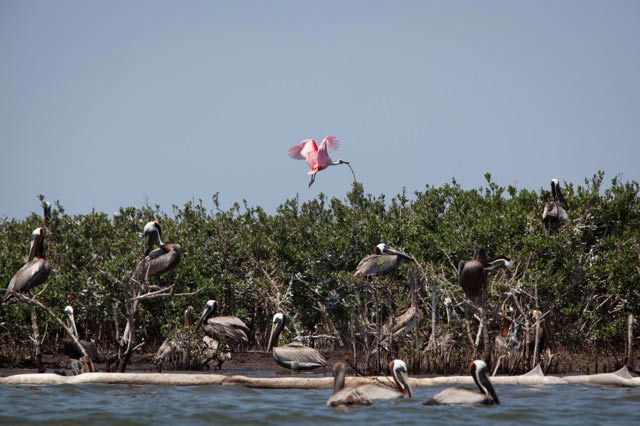 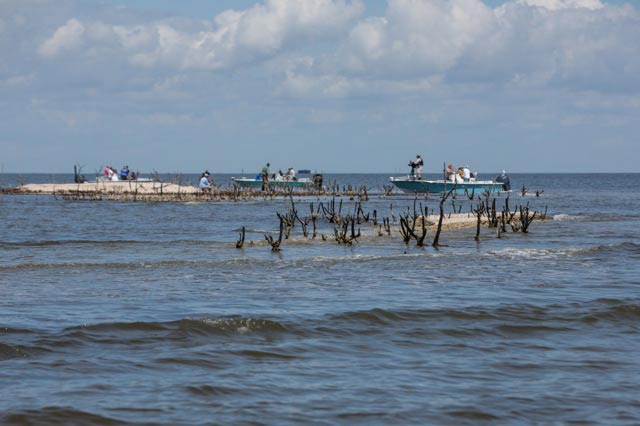 So far, the parish has raised $3 million of the $6 million needed before the rebuilding process can begin.

Shell, the only oil company to contribute, donated $1 million. Other contributors include the American Bird Conservancy and the federal Coastal Impact Assistance Program. The parish hopes to get the rest of the needed funds from the state’s “Restore Act Fund,” made up of money from that part of the BP settlement that has already been paid. 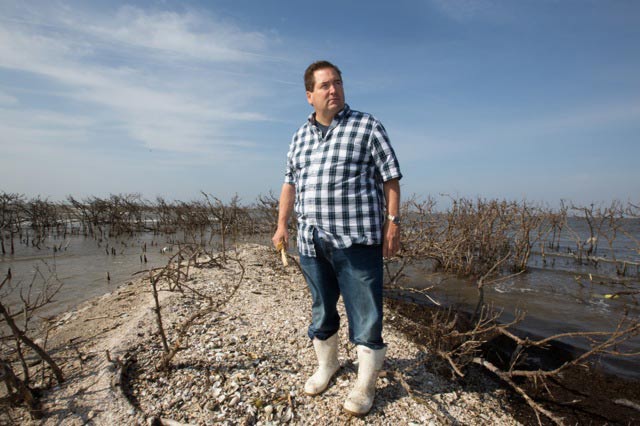 Billy Nungesser, Plaquemines Parish president during the spill who is now running for lieutenant governor, had been famous for his fierce criticism of BP. But now it seems he’s changed his tune.

During a town hall meeting hosted by Rush Radio in St. Tammany Parish, where residents turned out to express their concerns about the possibility of the first fracking project in their area, Nungesser gushed over the great relationship Plaquemines Parish has with the oil industry, no longer singling out BP as a bad player as he had in the past.

Though he believes residents should have a say regarding what type of industry is welcomed in their community, he said oil companies that operate in his parish “do the right thing.”

Referencing the “horrible pictures of the pelicans covered in oil,” Nungesser claimed that in the case of “a safety incident or something spilling from a platform, every company has gone beyond the call of duty in our parish to make it right. Oil companies are rebuilding those islands.”

But Cat Island is a perfect example that Plaquemines Parish “has not been made whole,” according to Hahn. “BP was asked to contribute to rebuilding Cat Island multiple times,” Hahn said, “but they haven’t given anything to help the project.” 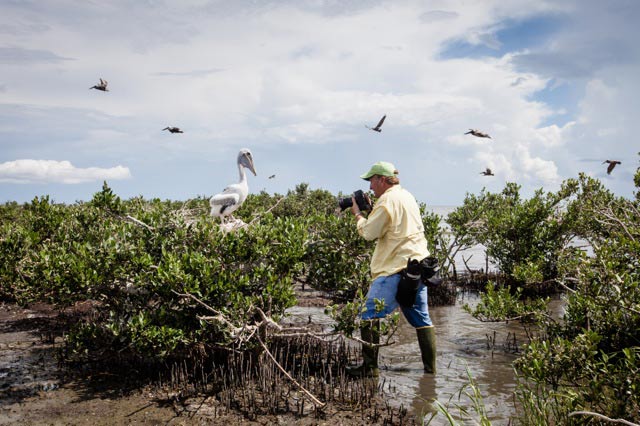 Cat Island was not mentioned in a BP report on the condition of the Gulf issued in March which paints a picture of the Gulf Coast on the mend. According to the report, “Available data does not indicate the spill caused any significant long-term population-level impact to species in the Gulf,” and “affected areas are recovering faster than predicted.”

“It is inappropriate as well as premature for BP to reach conclusions about impacts from the spill before the completion of the assessment,” an NRDA report states. NRDA will determine how much BP and its subcontractors owe for the environmental damages.

When asked what specifically BP has done to restore Cat Island, BP media spokesperson Jason Ryan sent out a statement about other coastal restoration projects the company has contributed to. BP agreed to pay for restoration projects in advance of NRDA’s assessment, which it was not required to do. Several of the projects are underway, but rebuilding Cat Island is not one of them.

The statement from BP points out: “The state loses about a football field worth of wetlands every hour,” and that “with regard to Cat Island specifically, it was rapidly eroding before the spill, primarily due to the impacts of Hurricanes Katrina and Rita.”

Though BP wouldn’t give a “Yes” or ” No” as to whether it has contributed to rebuilding Cat Island, the company wrote: “We are studying shoreline erosion on marshes and barrier islands, including Cat Island, to determine if there was any acceleration due to the spill.”

Bui has been working on studies of insect life in Barataria Bay that she began prior to the BP oil spill, making her a witness to the ongoing erosion process impacting the island. When plants are stressed they can’t hold on to sediment, she explained. And that is what happened when the oil covered the plant life on Cat Island. “You lose the mangrove, you lose the sediment,” Bui said.

“Heavily-oiled marshes erode at double the rate of a non-oiled marsh,” Melanie Driscoll, Director of Bird Conservation for the Gulf of Mexico and Mississippi flyway for the Audubon Society, told DeSmogBlog, citing a scientific peer-reviewed study done after the BP spill.

“Every year there is a delay restoring the island, there is less area for nesting,” Driscoll said. ” We need restoration to proceed as soon as possible.” 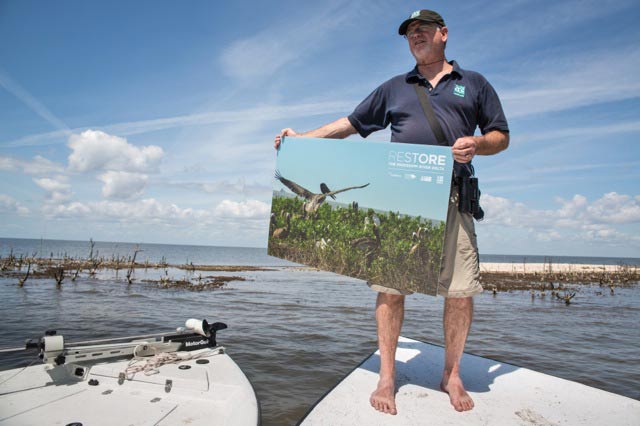 David Muth, Gulf Coast Restoration Director for the National Wildlife Federation holds up a photo of what Cat Island looked like before the BP oil spill, while standing in front of the island on March 31, 2015. (Photo: ©2015 Julie Dermansky)

On March 31, a trip arranged by Restore the Mississippi River Delta Coalition gave members of the media a chance to document what little remains of Cat Island. The National Wildlife Federation, a key player in the coalition, released a report about the health of the Gulf five years after the spill that paints a completely different picture than BP’s.

The NWF report cites several scientific studies that document the negative impact the spill had on 20 different species, including the brown pelican, which were Cat Island’s main inhabitants.

“The tragedy is brown pelicans were taken off the endangered species list the year before the spill,” Hahn said. “If there is no habitat, there are no birds. Who knows if they will come back when we finally get the island rebuilt?”