Captain Bien Do and a member of his crew drag a green net from the murky waters of the Gulf of Mexico and onto the deck of their modest fishing boat, which set off from a small marina in Gautier, Mississippi, on Friday morning, three days before the fifth anniversary of the catastrophic BP oil spill. Captain Do is quite spry at the age of 76, and he’s been fishing in the Gulf since he came to the United States from Vietnam in 1990.

Do and his crew dump the catch into a plastic basket. A few stingrays are removed and thrown back. Crew members pick through the remaining sea life. There’s a pile of small fish and tiny squid, and four shrimp. Do’s crew is looking for shrimp.

The shrimping season won’t open in Mississippi waters until June, but Do’s crew received special permission from the US Coast Guard to trawl with small nets to test out some potential shrimping spots where the Pascagoula Bay empties into the Gulf. With only four shrimp netted during the first test run, things aren’t looking so good.

“The past several years, it hasn’t been the same,” said Thau Vu, a community advocate who works with Vietnamese fishers in the area and invited a small group of journalists, activists and researchers onto Do’s boat.

It’s been five years since an explosion on BP’s Deepwater Horizon rig killed 11 workers and spilled millions of gallons of oil into the Gulf, followed by an unprecedented amount of chemical dispersants used to clear the oil from the surface. Vu says that fishermen and women are still reporting that it’s hard to find large quantities of shrimp concentrated in one area, making trawling a challenge.

“In fact, there are ongoing impacts [from the spill],” Vu said.

Shrimping isn’t the only challenge. Vu says that state officials determine the length of the oyster season based on the health of the population, and before the spill, the oyster season in Mississippi would typically run from September or October to April or May. In the years closely following the 2010 spill, state officials put heavy restrictions on oyster harvesting, and this year the state ended the season in March, with a 10-sack daily limit.

“In the past five years, if the [oyster] reefs have been closed like that, you’ve lost a big part of your income,” Vu said.

Vu says that oysters can make up 85 percent of a fisher’s income, or about $40,000 to $45,000 a year, and that’s before paying for costs such as boat maintenance and docking fees.

Smaller catches and shorter seasons don’t just impact small fishing operations. Seafood harvested from the Gulf must be transported, prepared and sold at markets and restaurants, providing jobs throughout local communities that are dependent on the work that fishers like Do and his crew do on a daily basis.

“To get it from the waters to the dinner table, there is a lot of work involved,” Vu said.

Vu says that the claims process arising from class action settlements with BP to compensate thousands of people and businesses that suffered economic losses resulting from the spill was set up in 2010, before impacts to the fishing industry were well known.

“Once you took a ‘quick pay,’ you weren’t eligible [to file a claim],” Vu said. “Smaller boats had to take the money to survive, with nothing coming down the road.”

Vu was referring to offers made by the Gulf Coast Claims Facility, which was replaced by a court-supervised settlement program in 2012. Individuals in economic distress were offered a one-time payment of $5,000, and $25,000 for businesses, if they signed an agreement saying they would not sue BP or file claims in the future.

“So, some people felt rushed to get a check, and there were a lot of language access issues,” said Vu, referring in part to the many Vietnamese fishers she works with in the region. The members of Do’s crew, for instance, are not fluent in English.

As Truthout has reported, watchdogs and claimants have since cried foul over the deals and are currently suing Kenneth Feinberg, the attorney originally appointed by the Obama administration to administer BP’s $20 billion compensation fund.

Listen to the Fishers 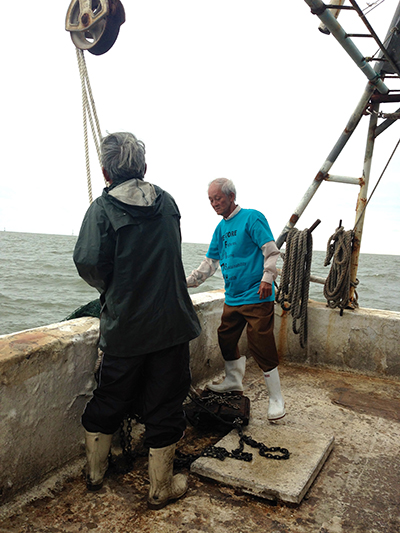 Bien Do and a fellow fisherman trawl for shrimp in Gulf waters. (Photo: Mike Ludwig) Inside the cabin of Do’s boat, Tuat Nigeyen is visibly frustrated as she speaks with journalists and researchers, with Vu translating. The second test trawl only brought in a few more than a dozen shrimp, bringing the day’s catch to about 20 shrimp total.

She points to a bottle of dishwashing liquid near the sink and explains that small fishing boats can get in trouble with state authorities if they use too much and it enters the water. Then why, she wonders, did the government allow BP to spray nearly 2 million gallons of dispersants into the Gulf to clean up the oil?

“So, what are all those academic degrees for?” Nigeyen demands. “Do they not know that the sheer volume of dispersants hurt the ecosystems? There is no fairness and justice.”

The Environmental Protection Agency calls the use of dispersants an “environmental trade-off” because the chemicals reduce risks to shorelines and organisms at the surface, but admits that “the long term effects on aquatic life are unknown.” The agency has required BP to monitor the impacts of dispersants.

A National Wildlife Federation (NWF) report released in late March notes that dispersants do not reduce the amount of oil in the environment; they simply break the oil down into tiny droplets. Dispersants can reduce the number of animals that are oiled and keep oil off of beaches, but increase the likelihood that underwater organisms are exposed to harmful compounds in oil.

These compounds make their way up the food chains, and oil and dispersant compounds have been found in the eggs of white pelicans nesting in faraway states such as Minnesota and Illinois, according to the report.

BP recently dismissed the report and accused the NWF of ignoring five years of research and government data showing that “damages were limited and the Gulf is undergoing a strong recovery.” The Gulf environment, the company contends, is “returning to its baseline condition.”

Crucial damage assessments continue to be tied up in litigation, and independent scientists say that much more research is needed to understand the full impact of the spill on the Gulf.

Nigeyen, however, is certain that the dispersants continue to impact fishing, but at public meetings, cleanup officials downplay their impacts and blame other problems, such as agricultural runoff.

“The destruction to the fisheries has not been comprehensively acknowledged,” Nigeyen said. “It has been downplayed.”

If state and local authorities want to understand the true impacts of the spill and the best way to restore the environment, Nigeyen says, they should be listening to the people who know best – the fishermen and women who depend on the waters, day in and day out.

Truthout
Share
Truthout goes onboard a small fishing boat in the Gulf to find out how the catastrophic spill is still impacting the region.