Austerity is dead, and income inequality has been proclaimed as the defining challenge of our time. So long live…. Deficit Reduction?

Somebody hasn’t been reading their Paul Krugman, who rightly observes that it’s stupid to worry about deficit reduction during economic downturns. Somebody didn’t get the message that the Fix the Debt cult of billionaire deficit hawks just turned diseased tail feathers and ran. Somebody didn’t notice that shrinking deficits are not economy boosters.

If the Democrats are wondering why their electoral chances in the mid-terms are looking so dismal, they should look no further than the progressive wing of their own increasingly right wing corporate party. Why do even the most liberal members of Congress seem to have a pathological need to tout deficit reduction in their “Better Off” budget? The headline of their document should be making the hairs on the back of your neck stand up. Because nobody cares about deficit reduction except obscenely rich people.

Robert Borosage of Campaign for America’s Future valiantly parses the doubletalk (by the way, I would love to see a think tank or lobby call itself something like Fight the Miserable Status Quo for Change Today, or People Against the Soul-Crushing Present) Whenever a group with “future” in the title sends me a fund-raising email, the hairs on the back of my neck remain at full attention. Because time’s a-wastin’!). But, I quibble. Writes Borosage:

This is the most progressive budget that will be introduced in the Congress. It contains bold reforms, but it also accepts a remarkably conservative fiscal framework.

It devotes over $1 trillion more of the increased revenues from its tax reforms to deficit reduction than to investment over 10 years. It projects an annual deficit of 1.6 percent GDP in 2024, far below a sustainable level of from 2.5 to 3 percent. The CPC rightfully challenges the destructive austerity policies of the last years, calling for repeal of the sequester and the wrong-headed Budget Control Act. But it responds to the alarms of the deficit hawks. Wall Street will howl at the tax proposals, but bankers should be pleased at the tribute paid to deficit reduction.

Holy sacred cow, Batman! These pragmatic suck-ups are worse than that wimpy Oregon couple who called 911 because they were “trapped” in their bedroom by their tantrum-throwing fat cat. Aptly named “Lux.” 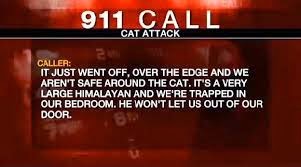 On the one hand, the progressive budget “rightfully” challenges violently destructive, over-the-edge austerity policies. On the other hand, it politely “asks” the rich to pay just a tad more, as it tacitly gives credence to their mantra of fiscal responsibility. Much of the additional tax revenue in this budget would go toward paying down the debt instead of much-needed spending to stimulate the economy. Even if it passed, the CEOs would simply gnash their teeth in public, but purr in private, complacently licking their paws as they lose a corporate jet deduction here, a vacation home write-off there.

Because the fat cats are safe, we’re still trapped, and there’s certainly no law enforcement named Eric Holder’s DOJ to answer our calls for help. Even Eric Holder’s own DOJ watchdog admits that they’re unwilling to herd fat cats.

With a few extra progressive-sounding meat by-products ( e.g.,”restoring” cuts to the previously too-meager food stamp budget and “reversing” the federal wage freeze ) this progressive budget is not too far from what the Bowles-Simpson Catfood Commission has been calling for this whole time! Tax credits that reward the “hard work” of regular people, closing of tax loopholes for corporations to make it all seem fair.

It obediently falls in party lock-step with the president’s own paltry suggested minimum wage of $10.10 — rather than the more generous $15 an hour being demanded by fast food workers.

And rather than call for true universal health care in the form of Medicare for All, the We Suck Less Budget suggests “building on the successes and efficiencies” of Obamacare through a public option, and graciously allowing individual states to pursue single payer plans…. in the future, of course. Not right now, with upwards of 40 million people uninsured right now and not having the power to put off getting sick until the future.

Not only is this Better Off campaign propaganda document disturbingly vague and disturbingly conservative, it’s also disturbingly pro-war and surveillance state. They don’t want to end NSA domestic spying (or better yet, cut off funding entirely for the NSA, the CIA and all the other acronyms of over-the-edge authoritarianism). The Progressive Caucus is merely calling for the usual veneer of more fake transparency. They want an annual accountability report from the president to ensure that we are being spied upon in a thrifty way. There’s even an ominous bit about continued funding of diplomatic efforts to effect “stability” in governments other than our own. It’s suspiciously pro-regime change-sounding, as in supporting undemocratic coups that put fascist puppets into power. See: Ukraine. Why domestic spying and continued meddling abroad would even remotely make us “better off” is not explained by the progressive caucus.

The usual suspects herded into the Democratic veal pen are screeching because this bold milquetoast budget is not getting the same attention by the corporate media as Obama’s worse budget and Paul Ryan’s terrible budget. Progressives really should be howling in embarrassment and fury that the words debt and deficit are in a progressive document at all. Austerity words have become acceptable parts of the liberal lexicon, and are being used as olive branches to placate wealthy campaign bundlers who donate equally to both parties. Because no matter which side wins at the polls, the plutocrats will remain the pampered show cat champions. Their money, after all, determines both the campaign themes and election outcomes. They will continue getting better, and better, and better off.

And meanwhile, keep paying attention to what our politicians actually do, rather than to what they say in speeches or write in their aspirational fund-raising budget manifestos. The usual bipartisan suspects of the Millionaire Senate, for example, have just come to a tentative agreement that would resume short-term benefits to the long-term unemployed, in exchange for allowing cheap-ass bosses to “delay” contributing to the pension plans of those lucky duckies fortunate enough to still have jobs. Extending jobless benefits to a few million people for a few more lousy months would also be paid for by a regressive user tax on airline travelers. It’s the same old, same old: they rob from the struggling to pay for the barely surviving. The hoarding rich shall not be inconvenienced as they grow richer and more bloated by the day. But they assuredly will continue to howl in mock outrage, victims of their own psychotic persecution complex.

The fat cat plutocrats and the suck-up politicians they own are to democracy what malignant tumors are to an organism. They neither know nor care that the cancer always dies right along with the host.