A drilling rig is in place and poised to drill Helis Oil & Gas Co.’s first exploratory well in St. Tammany Parrish to determine if fracking in the parish could be profitable. The company told local media that they expect to start drilling this week, despite the Parish’s ongoing legal challenge to prevent them.

Helis’ drill site, across from the Lakeshore High School, 40 miles north of New Orleans, is in an area zoned for residential use. But local zoning laws didn’t stop the Department of Natural Recourses (DNR) from issuing Helis a drilling permit.

The Louisiana Supreme Court chose not to hear the parish challenge to the appeals court ruling that DNR has the right to issue a drilling permit despite local zoning ordinances. But many parish residents still want the parish to keep fighting to keep fracking out of their neighborhoods.

Last week, St. Tammany Parish Council held an emergency meeting to discuss whether they should ask the Supreme Court to reconsider its denial to hear the parish case against the DNR. Before the vote, the Council’s lawyer made it clear that the vote was about protecting zoning ordinances, not a referendum on fracking. The council voted ‘Yes’, 10 to 2, after constituents weighed in.

Concerned Citizens of St. Tammany Parish had already planned to petition the Supreme Court to reconsider. Rick Franzo, the head of the citizens’ group, was thrilled the council voted to follow the Concerned Citizens’ call for the Court to take another look. Franzo pointed out that two of the three judges that voted to hear the case wrote dissenting views, which rarely happens.

“The Supreme Court will have to consider the justices dissenting opinions along with the briefs that will be submitted asking the court to reconsider the case,” he told DeSmog. He conceded that it is a long shot that the court will reconsider, but said it has happened before. 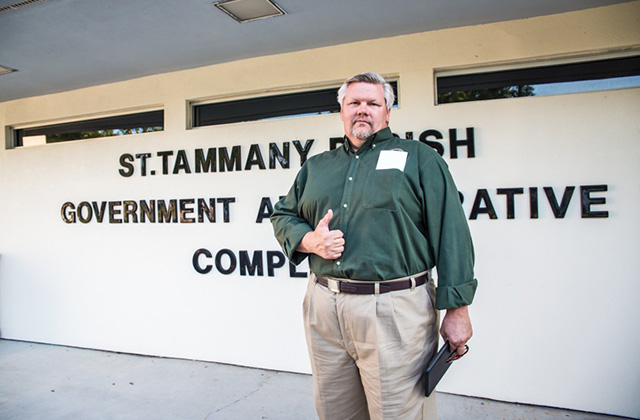 “The dissenting opinions were very strong,” Jake Groby, a St. Tammany Parish Councilman, told DeSmog. He thinks there is a good chance the Supreme Court will reconsider. “If not, the court is making it possible to give special privileges to certain companies, which is not fair,” he said.

Groby said that Supreme Court Justice Knoll found the analysis of the Court of Appeal to be wrong. In Knoll’s dissenting opinion. the justice wrote,

“I would grant this writ for a more thorough and appropriate analysis of the issues presented. Although the Court of Appeal correctly noted the Commissioner’s power to issue drill permits is an exercise of the police power of the state which may not be abridged pursuant to La. Const. art. VI, § 9(B), this Court has affirmed local government zoning codes are also exercises of state police power.”

And Supreme Court Justice Guidry wrote, “This matter involves the enforcement of local zoning ordinances, which are fundamental to our system of self-governance and of great importance to the citizenry.” And that, “It is not a typical preemption case, in my view, because St. Tammany Parish is not attempting to regulate the production of oil and gas, but is instead striving to protect its desired quality of life through a constitutionally authorized process.”

But the motions to reconsider presented to the Louisiana Supreme Court did not give Helis Oil reason to pause. Project manager Mike Barham told reporters today that the company is ready to start. ” We’re still excited to see if we have oil in St. Tammany Parish.”

With the rig now in place, Rapad Drilling and Well Services Inc, of Jackson Mission, which owns the rig, will drill a well approximately 13,000-feet deep to determine whether extracting oil in St. Tammany Parish is economically viable.

If Helis deems it profitable the company will apply to the DNR for a permit to frack, a permit the agency is likely to grant. If that happens many fear other companies will join the party, transforming the parish into an industrial landscape.

If the Supreme Court doesn’t stop Helis Oil, economics might, Franzo said. The fracking industry in the Tuscaloosa Shale, which St. Tammany is part of, is pretty much at a standstill due to the low price of oil.

Rick Franzo on the Dangers of Drilling in St. Tammany Parish.

Though Franzo doesn’t see the parish turning into a fracking mecca, even one drill site near a high school is one too many. He believes that zoning ordinances are meant to protect a way of life that Helis is threatening. “Our roads weren’t built for this kind of traffic,” Franzo said. He prays for safety of the high school students and their families.