Why does a 25-cent medical device cost $1,000 in the United States? If “Big Government” ruins everything, why are veterans and Medicare recipients happier with their health care than people with private insurance?

My left hand has finally reached the fame it has always desired, after having been featured last week on NPR.

Last year I wrote a book about Intrauterine Devices, but I didn’t like that all of the stock photos available either depicted a woman wrinkling her nose and dangling the IUD by the string, like it’s hair she pulled out of the drain, or grimacing and holding her belly, like she was suffering from gastritis.

So I contacted an IUD manufacturer and asked if I could have some samples to photograph.

Shortly after, I received a package in the mail of 10 free IUDs – and why not, when they only cost about 25 cents to produce? Fortunately, I was not in the United States at the time, otherwise this kind of parallel importation would have been against federal law and could have gotten me threatened with a 233-year prison sentence, like the unfortunate Dr. Canh Jeff Vo of Kentucky, among others.

But that’s beside the point. The point is, because of a $23 million dollar private grant, 30,000 Colorado women have received free IUDs, and in the six years since the grant was received, the teen birth rate has dropped 40 percent and teen abortions have decreased by 34 percent, in addition to a corresponding and overlapping decrease in Medicaid-funded births.

This is where my famous hand comes in, because NPR ran a report about Colorado’s predicament; a report that featured a stock photo my partner took of my hand, my free IUD. It appears that as the private grant is now running of money, the contraceptive program’s proponents are forced to find an alternate funding source. The program is running into complications because some people interpret the manner in which the IUD prevents pregnancy – by preventing uterine implantation, even in the case of a fertilized egg – as an abortion.

The beginning of a human being’s life is of course an important question, but at the same time, instead of arguing over how many unborn children can dance on the head of a pin, shouldn’t we be asking ourselves, how it is that a 25-cent piece of plastic and copper came to cost almost $1,000 in the United States, and why do we seem unable to do anything about it?

Without any kind of monopsonistic single-buyer, the only pharmaceutical pricing control that can be found in the US is that suppliers are required to discount the private sector price by approximately 25 percent before selling to the public sector. For example, the TCu380a copper IUD currently costs most public agencies in the US $588 per device, and goes for $325 to the Veterans Health Administration, which is required by law to be the lowest price in the whole country. That $325 does in fact represent a significant discount from the $932 private sector price. but I have to note that in 2005, CENABAST, Chile’s public procurement agency, negotiated prices for the same device down to only 31 cents apiece.

Granted, Chile’s 31-cent price per device was exceptionally low, but the fact is that outside of the United States the price for this pharmaceutical item is generally around $20, rarely exceeds $100, and never reaches our nearly thousand dollar price tag.

Regardless of whether you believe that the public safety net is essential or enabling, or when you think life begins, I think we can all agree that a 50-70 percent discount on a 100,000 percent markup is a bad deal, right? 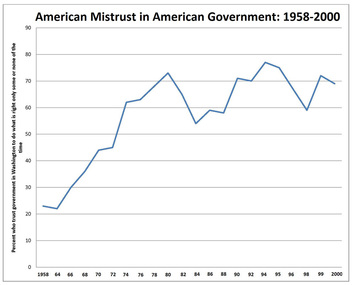 So it appears that in the case of American pharmaceuticals, the market has failed us. But what can we do? Everyone knows that Big Government isn’t the answer, right? People tend to inappropriately confuse the notion of a “single buyer” or “single payer” healthcare system with their feelings about “Big Government.” Initially, the public health insurance proposal that was to later become Medicaid only covered the poor, not the elderly. But after 14,000 senior citizens marched at the 1964 Democratic Convention demanding that they be included in the new public health insurance, the plan expanded to include Medicare as well. The year 1964 was also the year that saw an all-time low in governmental mistrust, with only 22 percent of Americans reporting that they trust the government to do what is right, “only some or none of the time.” By 1978, that number had climbed to over 70 percent, and it hasn’t budged much since.

Similarly, the American Consumer Satisfaction Index indicates that consumer trust in American government rarely exceeds 40 percent, and usually hovers in the mid 30s. However, the ACSI also consistently indicates that the happiest health-care recipients are in fact coming from the Veterans Health Administration, with satisfaction levels between 80 and 84 percent, followed closely by Medicare recipients (73-79 percent), with private plan consumers reporting the lowest levels of satisfaction (67-75 percent), approximately equivalent – and in fact sometimes below – the levels of satisfaction Americans report for the American government (65-72 percent).

But Americans don’t want public health insurance any more, right? It depends on how you ask the question. In 2009 a Kaiser Permanente poll in which Americans were asked whether they would favor, “Having a national health plan – or single-payer plan – in which all Americans would get their insurance from a single government plan,” found that 40 percent favored the idea and 50 percent opposed it.

In the same year a CBS/New York Times poll asked Americans, “Should the government in Washington provide national health insurance, or is this something that should be left only to private enterprise?” This poll found that only 32 percent Americans favored private enterprise, whereas 59 percent favored a government plan (and 9 percent had no opinion.)

At the time, when people were debating the direction of the new national health-care plan that later became the ACA, which of these two polls any person cited served as a Rorschach inkblot test to indicate what their personal preference was – those who wanted to claim that Americans were opposed to a government plan cited the former; those who wanted to bolster their belief that Americans favored a government plan cited the latter. Ten years earlier, Harvard researcher Robert Blendon had reported that when Americans were asked in general about a tax-funded health plan, 56 percent were in favor. But when the poll subsequently specified that, “all Americans would get their insurance from this plan,” support for the idea dropped to only 38 percent.

The most important point that has eluded the cherry-pickers is that there is considerable internal consistency among these polls: in every case, the majority of Americans disfavored the option that included the words “only” or “all.” These polls tell us very little about what Americans think about health care, only that Americans don’t like being told what to do – which everybody already knew.

Taking this all into consideration, let me phrase this for optimal consensus. I don’t trust the American government. But I trust corporate profiteers even less. I hate that I am only legally able to procure medications from suppliers that charge the American people significantly more than they charge all other consumers. Rather than watching our public services get bankrupted, I would like to see either a strong public sector that is empowered to negotiate low pharmaceutical prices on our behalf, or I would like to be allowed to exercise my consumer choice by importing cheaper, identical drugs from outside of the United States. I think most Americans can agree with this.