The Labor Department reported that the economy added 103,000 jobs in September. This increase, together with upward revisions to the prior two months’ data brought average job growth over the last three months to 99,000 per month, almost exactly the number needed to keep pace with the growth of the labor force. Consistent with this rate of job growth, the unemployment rate was unchanged at 9.1 percent. It has been at virtually the same level since April. The employment-to-population (EPOP) ratio did edge up slightly to 58.3 percent. This is up from a low of 58.1 percent in July, but still below the 58.5 percent level of a year ago.

The only two sectors showing much strength in September were employment services (temp help), which added 23,800 jobs, and health care, which added 43,800 jobs. Often growth in employment services is seen as a sign of permanent employment in the future, as companies often hire temps before turning to full-time employment. However, this growth only looks good in the context of a very weak labor market. Jobs in this sector grew at a rate of 48,000 a month between September of 2009 and January of 2010 without setting off any subsequent boom in full-time hires. Temp employment is still down by roughly 20 percent from its pre-recession level.

The health care numbers are striking because this seems to be part of an ongoing trend. Health care employment has grown at a rate of 31,400 per month since June, accounting for almost one-third of employment growth over this period. In a very weak labor market, health care jobs are becoming ever more important. 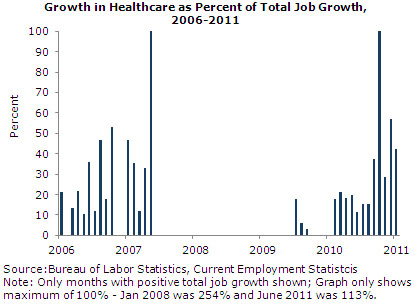 The one other notable bright spot was construction, which added 26,000 jobs, almost all in non-residential construction. The monthly numbers are always somewhat erratic, and this uptick could be in part attributable to repairs from the hurricanes. It is unlikely that anywhere near this pace of increase will be sustained.

The report showed a jump of 342,000 in the number of people employed involuntarily part-time, the second consecutive month with a large increase. This pushed the U6 measure (workers marginally attached to the labor force, such as discouraged workers or part-time workers who cannot find full-time employment) of unemployment to 16.5 percent, the highest since last December.

The duration measures suggest that long-term unemployment is becoming more of a problem with the average duration rising to 40.5 weeks, a new record. The share of long-term unemployed rose to 44.6 percent, which is slightly below the peaks hit earlier this year.

Wages have risen at a 2.1 percent rate over the last three months, essentially the same as the 1.9 percent rate over the last year. On the whole, this report gives no real cause for optimism. The economy continues to grow at a very slow rate. The double-dippers have little basis for their doom-saying. However, we are making no progress in bringing the economy back to full employment.