In November of 2011, in order to think through a situation I later reported on for Truthout, I staged a group art performance called FEINT at the flagship downtown Chicago H&M store. A week before Black Friday, approximately 20 people inside and outside the store fell to the ground at a predetermined time. Then, they got up and left. If anyone asked, we explained, calmly, that H&M and other manufacturers were allowing thousands of women to faint in Cambodian factories making these [gesture] clothes, but the company, the government and the media simply weren’t paying attention. Our action was intended as a quiet homage to mass faintings of garment workers that started in April of that year, and as an attempt to offer visual evidence of a growing rejection of an increasingly manic production cycle that disproportionately affects women in developing countries and keeps them in poverty.

As first reported here in April 2012, around 3,000 workers reportedly lost consciousness over the previous year in 17 separate mass-fainting incidents at 12 of Cambodia’s 300 registered garment factories. The fainting incidents – another 77 at a Svay Rieng factory on Friday, September 21, according to the Phnom Penh Post – have not abated; coverage of them has. What I claimed in my April report has only been proven conclusively now: thousands of workers continuing to fall ill due to H&M and Zara’s constant, “fast fashion” production cycle still isn’t enough to catch the garment industry’s attention.

But activists around the world are taking note. The Clean Clothes Campaign, a pan-European alliance of garment employee unions and NGOs, has been staging actions inspired by FEINT all over Europe this month. Called No More Excuses, the campaign aims to stage actions in seven more countries in Europe and increase visibility for an online campaign. 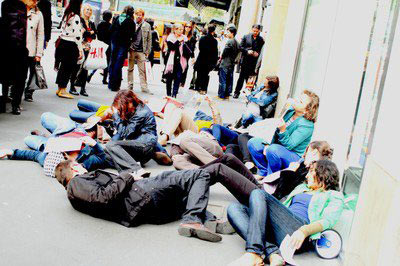 Activists in Paris with the Clean Clothes Campaign draw attention to mass fainting incidents in Cambodian garment manufacturing plants. (Photo: Clean Clothes Campaign)(H&M – by far the most responsive of the big brands, particularly around Cambodian workers’ issues – replied to the Clean Clothes Campaign’s public actions with a brief email on September 19 underscoring its commitment to the Fair Wage Network. However admirable, the loose set of standards member companies agree to do not outline or enforce timelines or benchmarks to achieve standards, which include a living wage. In a response published September 26 on their web site, the Clean Clothes Campaign argues that the Fair Wage Network fails to foreground the living wage as a human right; others point out that a corporation’s decision to join a voluntary, participatory program with little oversight nor space for direct feedback from workers amounts to feel-good marketing.)

So, the actions continue. Here’s a video from a September 19, 2012, action in Bristol, UK, and another from a Belgian September 21 action in Brussels. The image above is from a Paris action, according to the Clean Clothes Campaign’s Facebook page; another, so far, has been staged in London.

Of course, there’s also Chicago. And lest we forget: Cambodia. Where malnutrition, insecticides, factory ventilation infractions, overwork, a particularly nasty strain of cold from Canada, female hysteria, spiritual possession and partying were each blamed, in turn, for workers’ loss of consciousness on the factory floor. The real story behind the incidents is much more complicated – and might be more local. 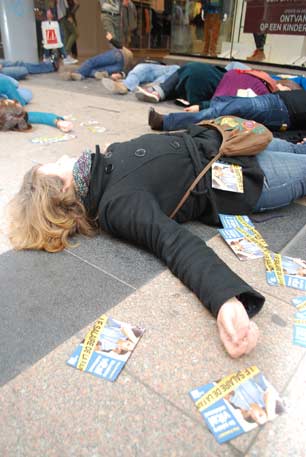 A still from the Brussels action, with leaflets. (Photo: Clean Clothes Campaign)Keep in mind, the mass faintings did start on the heels of the largest cohesive labor action in the short history of the nation’s garment industry, which ultimately failed under crushing violence and police and media repression. The garment industry in Cambodia is the nation’s third-largest moneymaker, but the pay workers receive also supports one fifth of the country – those who work in rice fields in the provinces. Therefore, their pay supports the nation’s second-largest industry – agriculture – too. Workers in the factories currently earn a minimum of $61 per month and have been agitating for an increase closer to the living wage, last calculated at $93 per month – but likely rising. The precarious economic situation means workers frequently go without food. Even before the mass fainting incidents, workers lost consciousness on the factory floor, on average, between one and five times per week, per factory.

Yet mass numbers of workers – between 20 to several hundred – began fainting in April 2011. Who’s to say that a weakened physical state couldn’t be caused by a deep frustration following managers’ dismissals of well-organized demands? We also can’t ignore that since the September 2010 mass uprisings, when between one- and two-thirds of the entire workforce walked off jobs to demand better working conditions and fair pay, the industry itself has changed. H&M and Inditex – the company behind Zara, the world’s largest clothing manufacturer (to H&M’s standing as the second largest) both manufacture in Cambodia; both have long pioneered the constant turnover of merchandise and loss of seasonal clothing demanded by fast fashion. Now, fast fashion has caught on throughout the industry, and the result is clear: significantly more clothing is being produced now than it was just a few years ago.

For the already jury-rigged machine of international garment manufacturing, it’s simply too much. Certainly, a living wage would offer the most immediate and wide-ranging resolution to mass faintings and the endemic poverty they point to; but the fact is, our global system of garment trade requires significant reform. Whether we think of the fainting incidents as well-organized but remarkably autonomous refusals to work under unlivable conditions or as a purely physical response to exhaustion is no matter: even fancy Orange County ladies who spend all day shopping for fashion know that stress kills. 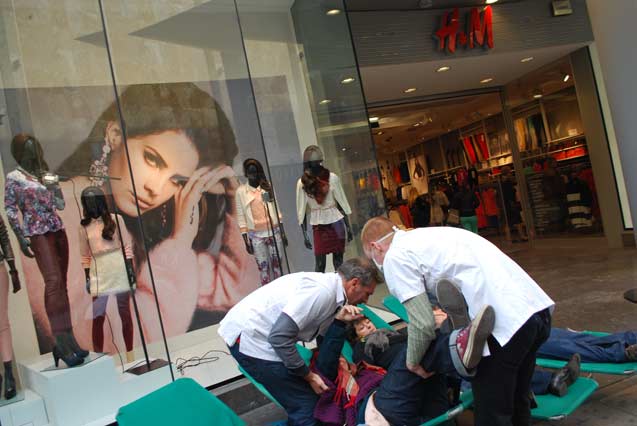 Companies will blame such customers, of course, for demanding an increase in the pace of production at every stage of the industry. But waste at H&M and Zara – crates upon crates of unsold clothes every week, according to retail workers here in Chicago – would indicate that consumer demand isn’t actually driving fast fashion. And the Fair Wage Network, in its current configuration, isn’t strong enough to have an impact.

So whatever is driving fast fashion, really – perhaps industry leaders are suffering from spiritual possession, or hangovers, which causes them to accidentally place orders at factories well in excess of what workers can produce or retailers can sell – that’s what’s causing mass faintings. In Cambodia, sure. But also in Paris, Brussels, London, Bristol and Chicago. Maybe soon in your town, too.

Swooning Over Fashion, the Clean Clothes Campaign is calling it. So clever: I wish I’d thought of it!

Anne Elizabeth Moore has a new book of essays and photographs out, outlining Cambodia’s uneven economic development. Hip Hop Apsara: Ghosts Past and Present is available here, but you may be more interested in staging your own version of FEINT.

Share
Copyright, Truthout. May not be reprinted without permission.
Anne Elizabeth Moore