Yes, there are profiteers positioned to make fortunes off of the misery of climate change. Read about the details in “Windfall: The Booming Business of Global Warming.” Get this riveting book – simultaneously infuriating and droll – from Truthout by clicking here. 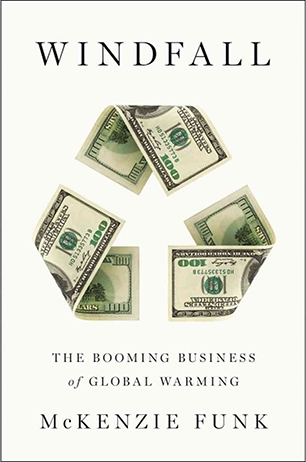 (Image: Penguin Press HC)In Windfall: The Booming Business of Global Warming, environmental author McKenzie Funk pulls off the nearly impossible task of covering the most cynical of profiteering (making money off of the Earth’s catastrophic reconfiguration because of climate change), while penning a captivating read that avoids being funereal. Even while being aware of the dangers at hand, Funk regularly acknowledges the droll ironies of a society that can even make money off of its own self-destruction.

In his journey of profiling those who plan to make fortunes off of the Earth’s unraveling, he interweaves the scope of the disaster that awaits, as in this passage:

In the Arctic [in 2012], 97 percent of Greenland’s ice sheet was observed melting on a single day. Sea ice shrank to a dramatic new low, surpassing the 2007 melt by another 300,000 square miles, another Texas. … Global emissions has just jumped 3.1 percent. … The concentration of carbon in the atmosphere was soon to hit a milestone four hundred parts per million, and another round of aimless UN climate talks was slated for Qatar, which has the highest per capita emissions in the world – but it was a party.

Funk uses wordsmithing finesse to tell a riveting story while anchoring it in detailed examples. He understands that:

As the world changes into an environment at least as foreign to many of us as Alaska was to a Louisiana tug captain, some of our smartest are developing staggeringly complicated plans to deal with what essentially a problem of basic physics. Add carbon, get heat. We should remember that there is also genius in simplicity. We should remember that we rarely recognize hubris until it is too late.

Funk allows the future profiteers their say without being derisive. Nevertheless, he is inherently skeptical of disparate efforts to adapt to (at a profit) — not prevent — the dramatic change to the planet’s ecological balance.

Of historical periodic attempts to privatize, for example, firefighting (including the retention of expensive fire “protection units” in drought-stricken California today), Funk concludes that such a system of privatization of catastrophe prevention is ultimately unworkable: “The libertarian dream was a logistical nightmare.” Now, it is turning into a global nightmare.

Funk’s view is that given the human disposition to profit, there will inevitably be those – as there have been throughout history – who will attempt to make large monetary gains from the misfortunes visited upon others. He doesn’t know it the human drive toward avarice can be changed, but he knows that disaster awaits if it isn’t.

There is also something particularly bothering Funk as he is propelled by the thrill of a journalist chasing a fascinating story: It is the injustice of global warming. “Climate change is often framed as a scientific or economic or environmental issue, not often enough as an issue of human justice,” Funk writes.

“The hardest truth about climate change is that it is not equally bad for everyone,” Funk writes in a statement that some would consider underemphasizes the likely severity of global warming for even the wealthy northern nations. (Just consider that in the worst-case scenarios, most of the cities on the East and West coasts of the United States eventually could be floating in several yards of ocean water. National Geographic published possible scenario maps of just such a United States with its coastal urban areas underwater.)

But he is onto something in that the developed countries are largely now not sincerely attempting to reduce climate change: They are aiming merely to mitigate its damage to the wealthy nations that primarily have caused it.

That is what appears to be behind President Obama’s proposed “climate resilience fund,” which according to the Christian Science Monitor, “will include $1 billion to help communities deal with the effects of climate change.”

Funk, from an overall perspective, has nailed a significant point: With investors poised to profit from global warming largely created by the developed world – and with impact reduction technology being planned mostly for only already prosperous nations – the degradation of our atmosphere will not affect the peoples of the Earth equally. Just consider all the underdeveloped nations in the tropics and subtropics that would experience unbearable heat as temperatures warm.

“The imbalance between rich and north and poor and south – inherited from history and geography, accelerated by warming – is becoming even more entrenched,” Funk declares. He argues that the industrialized nations most responsible for the destructive impact on our environment are best prepared to withstand its coming onslaught – on a relative basis. “Many people will wall themselves off from the worst effects of global warming,” he asserts, “while others remain on the wrong side.”

That raises the question of what will happen to those individuals who cannot survive in heat that might reach 150 degrees in the tropics. Will a wall be built around Europe such as the ones built along the US-Mexican border or in Israel? Will undocumented immigrants be left outside “safe zones” to die?

And what of food? Funk documents how investors are buying up arable land to grow produce on in the future, betting that the cost of staples such as corn and rice will rise sky high as more and more crop land becomes unusable because of increasing droughts. In fact, Funk notes, global warming is opening up formerly frozen land as fertile soil in areas such as Siberia – and investors are buying up huge lots to farm in cooler climates (with freshwater sources) around the world as cultivatable land becomes scarcer in other areas.

And what of island nations such as the Maldives – that despite their investment in seawalls – are expected to disappear from the map because of rising ocean waters?

In November of 2012, BuzzFlash at Truthout penned a commentary, “It’s Not Just That Corporations Are Ignoring Global Warming, They Are Profiting From It,” based on a news story in The New York Times on the same topic that Windfall covers:

In fact, on September 19 (2012) The NYT ran a candid account of the riches to be made off of global warming titled “Race Is On as Ice Melt Reveals Arctic Treasures.”

The NYT dispassionately informs us:

“Here, as well as in Alaska, Canada and Norway, oil and gas companies are still largely exploring, although experts estimate that more than 20 percent of the world’s oil and gas reserves are in the Arctic. Warmer weather has already extended the work season by a month in many locations, making access easier. …

At current rates, Arctic waters could be ice-free in summer by the end of the decade, scientists say.”

The stakes are high, involving military build-ups, the wooing of previously ignored nations by superpowers, and the battle over extraction rights. But, according to The NYT, “experts say boundary disputes are likely to be rapidly resolved through negotiation, so that everyone can get on with the business of making money.”

Yes, global warming is leading to a whole new profitability frontier: as islands are threatened with extinction due to rising waters, hurricanes and tornadoes run amuck, and temperatures become increasingly volatile, the vulture capitalists see dollar signs amidst the calamitous ruin.

Funk understands the dire implications of climate change, but he manages to never lose sight of the immense capacity of the human species to engage in the folly of its own self-destruction blinded by wearing eye patches of greed.

Yes, there are profiteers positioned to make fortunes off of the misery of climate change. Read about the details in “Windfall: The Booming Business of Global Warming.” Get this riveting book – simultaneously infuriating and droll —from Truthout by clicking here.