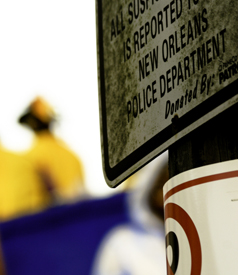 The conviction of three New Orleans police officers Thursday, for the shooting and subsequent coverup of the death of Henry Glover in the chaotic days after hurricane Katrina in 2005, marks a victory for federal agencies working for more than a year to root out corruption and lawlessness within the city police department.

Arguments that the officers were working under apocalyptic and confusing conditions proved to be not enough to sway the federal jury. The guilty verdict against former officer David Warren for shooting Mr. Glover, Officer Gregory McRae for burning his body in a coverup, and Lt. Travis McCabe for lying in a police report about what happened came after repeated testimony about the challenges – physical and ethical – that face the police during a major disaster. Two other officers were acquitted on charges that they beat two men who’d arrived at a central police precinct to get help for Glover.

Twenty current and former New Orleans police officers face federal charges stemming from the period after Katrina made landfall, flooding the city and decimating law and order. The cases pit members of a historically corrupt police department against federal prosecutors, and some residents say they are a necessary part of New Orleans’ recovery.

Still, the Justice Department’s investigation of the New Orleans Police Department – and the subsequent prosecutions – may have some unforeseen consequences, Peter Scharf, a criminologist at Tulane University, has warned.

It is a “morally treacherous” gambit to measure by typical standards the actions of stressed people in a virtually lawless post-Katrina New Orleans, Mr. Scharf told the Monitor in 2009. The outcome, he worried, could affect the willingness of first responders – police, doctors, and nurses – to stay behind during a major emergency for fear of later repercussions.

“This was a very troubling trial,” Scharf said in an interview Friday. “The question remains: How do you judge conduct in extreme stress and what context does an extreme environment put around erratic action?”

Indeed, Mr. Warren’s defense attorney, Rick Simmons, sought to highlight the “fog of war” aspect of those days. “When you take into account reasonable versus unreasonable, you have to take into consideration the conditions under which [Warren] was living,” he said in his closing arguments.

But the grisly details of the Glover shooting, added to powerful eyewitness testimony, gave federal prosecutors reason to move ahead. Glover’s family had fought fruitlessly for years to get local prosecutors to investigate his death.

Warren, who took the stand in his own defense, told the jury he was carrying an assault-style rifle – his own, as opposed to his city-issued weapon – while guarding a police substation at a strip mall as parts of the city were being looted. When Glover and a friend pulled into the parking lot in a stolen truck, Warren said he ordered them to stop, but they didn’t. He said he fired at Glover after seeing what he thought was a weapon in Glover’s hand, after the pair had left the truck and were rushing toward the mall.

But another story emerged during the trial, along with revelations that officers initially lied to a grand jury before agreeing to cooperate with the FBI.

Officer Linda Howard, Warren’s partner, testified that the two men didn’t pose a threat, and that Warren fired as Glover leaned against the truck, lighting a cigarette. The shot hit him in the back.

Federal prosecutors argued that the confusion and fear following Katrina did not justify acts such as firing at Glover from a second-floor balcony. The storm caused police officers to believe “that no one was watching and no one would care about Henry Glover,” said assistant US attorney Tracey Knight in her closing statement. “But they were wrong.”

The FBI opened a broad civil rights investigation of the New Orleans Police Department last year, after an exposé of post-Katrina vigilantism by the investigative news organization ProPublica. The New Orleans coroner’s office has documented 23 unsolved deaths as the result of gunshot wounds to the head in the days and weeks after Katrina.

Next summer, US prosecutors will try four New Orleans police officers in a case involving a widely disputed shooting at the city’s Danziger Bridge that left two civilians dead and six wounded.