Conservatives have been saying lately, “We're broke,” and need to cut back on the things we (government) do to protect and empower each other. They have a unique definition of the word “we” when applied this way to Americans. For them “we” doesn't mean “We, the People,” it means something different.

Speaker of the House John Boehner, Jan. 26: “Well, if you really want to talk about what the 'Sputnik moment' is,” he replied, “it's the fact that we're broke. And American people know we're broke.” Again on Feb. 10: “We're broke. Let's be honest with ourselves.”

Wisconsin Governor Scott Walker says Wisconsin is “broke,” too. (Therefore they have to get rid of unions???)

Conservatives even extend their nonsense to claim California is “broke” because it taxes the rich!

If the definition of “we” is “we” then we certainly aren't “broke.” In fact just 400 of us have more money than half of the rest of us — 155 million people. Just 400 peoplehave that much! That's a whole lot of “not broke” right there.

Last year the top 25 hedge fund managers — just 25 people — had income of $22 billion. Those 25 people had more income than all the people in 440,000 average American families combined. (Median household incomeaccording to the Census Bureau in 2008 was $52,029.) That's a whole lot of “not broke” right there, too.

And these are just two examples of how extreme the income inequality in our country has gotten. A few at the top have so much at the expense of the rest of us.

Where Did The Money Go?

Those 25 hedge fund managers have been granted a special tax rate of only 15%. Those 400 wealthy people who own more than half of the rest of us get much of their income from “capital gains,” dividends and other special low-tax gimmicks. The top few percent of Americans have been getting tax breaks since Reagan, and the result is that the rest of us have to make up the difference. We're not “broke,” we're paying for the gains at the top.

It hasn't just been income-tax cuts, either. The businesses owned by the top few percent have also been getting the breaks. Joshua Holland again, in How Big Business Gets a Free Ride by Lobbying to Raise Your Taxes, explains,

Well, consider this: in the 1940s, corporations paid 43 percent of all the federal income taxes collected in this country. In the 1950s, they picked up the tab for 39 percent. But by the time the 1990s rolled around, corporations were paying just 18.9 percent of federal income taxes, and they forked over the same figure in the first decade of this century. We – working people – paid the difference.

So what we are seeing it that the income at the top is rising: 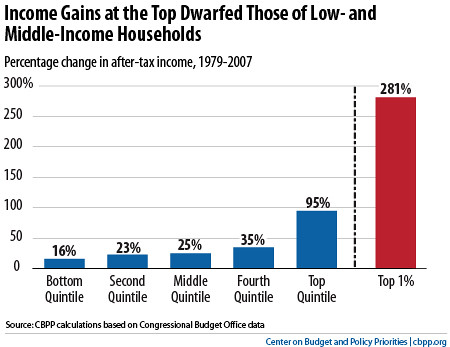 While the taxes at the top are falling: 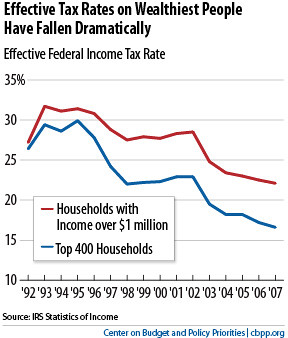 And the taxes paid by the corporations is also falling: 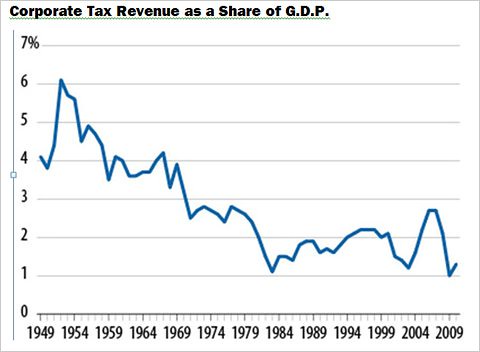 How Did It Happen?

Since the early 80s our economy has been restructuring itself in ways that send almost all of the gains to a few at the top. “Free trade” pitted our workers against exploited workers in a race to the bottom. Deregulation removed consumer and other protections, allowing corporations to become predatory and monopolistic. Meanwhile the tax system has been restructured to send the tax collections downward. One of the biggest tax shifts was increasing the Social Security payroll tax on those at the bottom and middle – money that was supposed to be set aside for their retirement — and using that money to fund tax cuts for those above. And now they claim all that money people were putting away is gone so we need to cut their retirement by moving the retirement age out. In addition the corporations are paying a lower share of the taxes as well.

America Is Not Broke

Simple answer to a simple question: America is not broke, we are richer than ever. But the “We” that make up We, the People are not sharing in the gains, while the “we” that make up the wealthy few are not sharing … anything. The tax cuts have stolenfrom us our ability to maintain our infrastructure, education our people, maintain our competitiveness in the world and take care of each other.

As Michael Moore said in Wisconsin,

“America is not broke, not by a long shot. The country is awash in wealth and cash. It's just that it's not in your hands. It has been transferred, in the greatest heist in history, from the workers and consumers to the banks and the portfolios of the uber-rich.”

Here's Cenk on this: