A reader asked me a good question recently: Why do I have such kind words for Iceland’s economic performance, when the decline in its gross domestic product was not much different from Estonia’s?

Because Iceland was supposed to be the worst case. But, as a report from the International Monetary Fund report put it last year: “Under the recovery program, Iceland’s recession has been shallower than expected, and no worse than in less hard-hit countries.”

Given the wild excesses Iceland’s bankers indulged in a few years ago, how many people thought that a real G.D.P. comparison of Iceland, Ireland and the Baltic nations today would look like this? 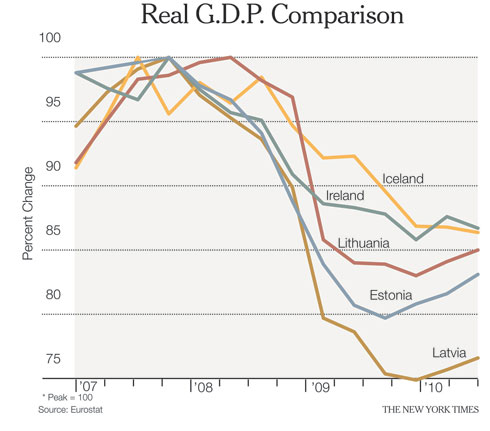 As I’ve said before, while Iceland has hardly gotten off unscathed, its economy has done much better than most analysts expected.

Last month The Irish Times published a two-part column written by economics editor Dan O’Brien, in which he compared the economic recoveries of Iceland and Ireland. He concluded that Iceland, which has kept its currency, fared no better than Ireland, which is a member of the euro zone. “Iceland has suffered more seriously than Ireland by every major measure other than employment,” he wrote.

These articles aren’t bad, but need to be read with caution. Specifically, I’d offer the following counterarguments:

— It’s telling that Ireland now consoles itself with comparisons to Iceland. Two years ago, the notion that Ireland might do as badly as Iceland was only alluded to in gallows humor — there was no way it could really be that bad.

— Iceland has done somewhat worse than Ireland in terms of G.D.P. growth, but better in terms of employment. Employment matters much more to people’s sense that the economy is working.

By all accounts, there’s just a lot less misery in Iceland, despite a sharp drop in consumption.

— Iceland has more or less resolved its crisis; Ireland has not.

— Maybe most importantly, comparing the two nations’ export growth — which looks similar — is misleading, because Iceland’s is a very open economy.

This has two implications. First, it’s harder to achieve a given percentage increase in exports once you’re already exporting a large share of output.

Second, when your goal is to support demand for domestic goods, a given percentage change in exports matters more.

One way to understand this latter point is to compare net exports with G.D.P., as shown on the second graphic on this page. 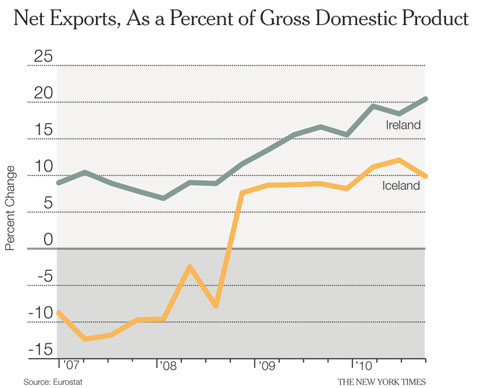 Iceland’s positive swing has been about twice as large as Ireland’s — and we’re talking an extra 10 points of G.D.P. here.

That’s a lot of extra stimulus, and to the extent that it was due to devaluation, that’s a major argument in favor of Iceland’s continuing to maintain its own currency and stay out of the euro zone.

Donate Now
Share
Paul Krugman
Truthout
Share
A reader asked me a good question recently: Why do I have such kind words for Iceland's economic performance
Politics & Elections