On September 3, 2005, two days after Federal levees’ and canals’ failures put most of New Orleans under 6 to 16 feet of water in the wake of Hurricane Katrina, Medea Benjamin of Global Exchange and Don Paul of Housing Is A Human Right founded Rebuild Green in San Francisco as a means of channeling donations and other forms of aid to their friend Malik Rahim in New Orleans.

A few days later, the organization that became internationally known as Common Ground arose out of talk around Malik’s kitchen table in the West Bank neighborhood of Algiers Point. Sitting under candlelight, with $50 the sum of their ready cash, Malik, his partner Sharon Johnson and Scott Crow of Austin, Texas, decided on the name, which meant to bespeak a willingness to work together for the general well-being of a city and region apparently abandoned to suffering, chaos, race-war and darkness by city, state and federal governments.

Common Ground served as a magnet. Word of it spread through the Internet, the San Francisco Bay View and Veterans for Peace. By the end of that September, dozens of volunteers from across the United States and elsewhere in the world had gathered at Malik’s house. They slept in tents and under no cover. They shared one bathroom and tub. They packed in the ice and water donated and delivered by semi-trucks and church buses. It was ever more necessary as these volunteers’ numbers increased in the swelter following the blow of another hurricane, Rita, through southeast Louisiana.

They got very busy despite the continuing lack of electricity and running water throughout most of New Orleans. 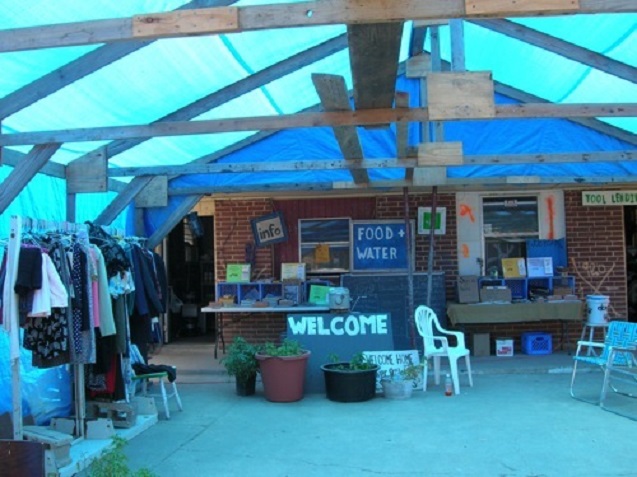 The ‘Little Blue House’ that the Common Ground Collective occupied as a base to defend against widespread demolitions in the Lower 9th Ward from January 2006 onward. (Photo: Don Paul).

Other Common Grounders started a legal clinic to help residents with claims and defense of homes. Many more volunteers served at distribution centers, handing out food, water, clothing, cleansers and tools. The organization transformed a flooded day-care center in the 8th Ward into a “House of Excellence” that provided access to 17 computers. One guerrilla radio-station began, then another. On foot and on bicycles, volunteers canvassed neighborhoods to find out what the scattered, returning diaspora of residents most wanted them to do.

What Common Ground accomplished in its first year is a testament to what the American people can do when their compassion and capabilities are freely engaged. The two parts of Common Ground, the Common Ground Collective and Common Ground Relief – sustained wholly by volunteers and donations and work by the most disadvantaged strata of New Orleans society – produced effects and numbers that are both revealing and astonishing. They a show a path still open for Americans to help one another in the future.

Here’s the record, much of it noted in Breaking Ground, the 24-page publication that came out on Common Grounds’ one-year anniversary.

* Served more than 100,000 residents in Orleans and nearby parishes.

* “Gutted” more than 1,200 houses and 12 schools and at least four churches in New Orleans (to “gut” a building is to remove its mold and rotten wood and other waste).

*Established a health clinic on the East and West banks of New Orleans, including the first post-flood clinic in the Lower 9th Ward.

*Established a legal clinic on the West and East banks.

*Established a bicycle shop, RUBARB (Rusted Up Beyond All Recognition Bicycles), on both banks and distributed several thousand bicycles.

*Established a community garden and programs for soil remediation and wetlands restoration.

*Established children’s and community centers on both banks.

* Established a media center in the House of Excellence alongside the 17 donated computers that were in constant use from7 AM to 10 PMin the 8th Ward.

*Occupied and preserved the St. Augustine Catholic Church in the 7th Ward and the Martin Luther King Jr. School in the Lower 9th Ward.

*Employed more than 40 low-income New Orleans residents in the renovation of the Woodlands Apartments complex – many of these residents formerly incarcerated.

*Somehow discovered and recorded by February 16, 2006, the ownership, contact information and remediation wants of more than 12,000 houses in the Upper 9th Ward and Lower 9th Ward – during a period in which by far the greatest area of these wards remained without electricity and running water.

In short, the far-flung volunteers and New Orleans residents who were engaged in Common Ground during that “frontier time” of National Guard occupation and FEMA trailers in 2005-06 did tremendous amounts of positive work in their combined organizations’ first year.

All of the accomplishments noted above were done without a penny of city, state or federal government funding. The $2 million or so that Common Ground spent in its first year came entirely from private individuals’ and groups’ contributions. In-kind donations of food and tools and books and clothing also helped a lot.

What lessons can be drawn from the record of Common Ground in its first year?

What does the example of Common Ground offer for the future of an era in which “natural disasters” and failures of infrastructure occur more and more often?

I was in New Orleans with Common Ground from January 11onward in 2006, following completion of the “9/11 Guilt” DVD project in the San Francisco Bay Area. From June through the end of December 2006, I served as operations director for Common Ground Relief.

Among the most precious pieces of knowledge I gained from that role during that time is how generous people of the United States, Canada, Europe, Russia and, yes, Africa, Asia and Oceania remain. We had volunteers from every continent. They all gave their work, time, money and goods without asking any recompense but personal satisfaction from community members recovering some means.

Another important piece of knowledge from that experience is how well-founded natives’ home-grown diets and ways of building are. Residents of the Lower 9th Ward had a luminously efficient system of community gardening as well as their own community currency during the 1930s Depression. All we of Common Ground had to do was listen to them. 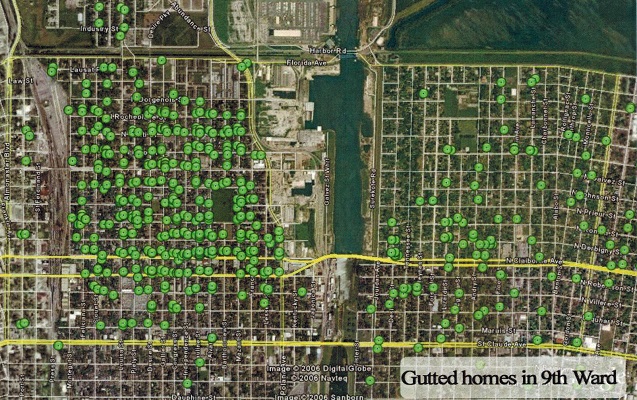 Dots-graphic of houses gutted by CGR in the Upper and Lower 9th Wards, 2006. (Photo: Common Ground).

Another big piece of learning from New Orleans in 2006 was that progress went forward most swiftly and creatively when it most avoided contact with government agencies. Our Health Clinic in the Lower 9th Ward was completed from shell to fixtures, plumbing and baseboards in less than three weeks, thanks to volunteers and others working every day for 12 or more hours. We then had to wait more than four months to open that much-needed clinic, as the city of New Orleans found infractions of code such as spacing of outlets and placement of handrails.

The greatest lesson I keep from that year, however, is that people of the United States still have the will and compassion and abilities to accomplish all the good that we’re given the wherewithal and freedom to do.

Share
Copyright, Truthout. May not be reprinted without permission.
Don Paul

Don Paul moved to New Orleans from the San Francsico Bay Area in January 2006 to work with Common Ground and Rebuild Green. He was the youngest winner of a Wallace Stegner Fellowship in Creative Writing at Stanford University (age 20 in 1971) and held the world best for running 50 kilometers (2:50:55) between 1982 and 1992. He’s the author of more than 20 books and the leader or producer of more than 20 albums. He continues to work in New Orleans.