This February marks the 74th anniversary of a horrific chapter in Portland history that must be finally, honestly dealt with by the city and its newspaper of record.

However, if Portland is to ever become truly world class, it needs to finally atone for (among other transgressions) its role in the ethnic cleansing, internment and internal exile of its entire Japanese American population during WWII. Back then, the Rose City stood out as a hotbed of vicious racism that couldn’t get its Japanese Americans – most of whom were American citizens – rounded up andremoved from the city fast enough.

“The support for removal expressed at the Portland hearings was not atypical, but the Portland hearings (of the House Select Committee Investigating National Defense Migration – better known as the Tolan Committee) did differ from those held in San Francisco and Seattle in one important way – the absenceof organized opposition,” wrote Ellen Eisenberg in “As Truly American as Your Son”: Voicing Opposition to Internment in Three West Coast Cities. “Small but organized groups opposing the removal participated actively in the San Francisco and Seattle hearings, but in Portland no organized group defended Japanese Americans or questioned the need for mass internment.”

No organized group. No one. Nada. Nil.

The following pro-internment highlights are taken from Eisenberg’s scholarly article:

This wasn’t a city reluctantly following orders from Washington to carry out a noxious war-time directive. No, it was more like a town hell-bent on proving its patriotic bona fides by unleashing its worst racist elements in a manner not far short of direct physical assault.

It appears that almost no one outside the Japanese American community itself was willing to make a public stand against the internments – no one except for one woman, Azalia Emma Peet of neighboring Gresham, according to Eisenberg. Only Peet, a Methodist missionary who had lived in Japan, apparently had the courage to publicly question the internments.

During the first days of the Portland Assembly Center internment, The Oregonian newspaper went so far as to print a propaganda feature photo pageof smiling young internees effortlessly going about theirdaily lives: hanging laundry, playing ball games, etc. One of those shown is Jack Yoshihara, who had been a sophomore on the 1941 Oregon State Beavers championship football team. But Yoshihara had not been allowed to play in the January 1, 1942, Rose Bowl game won by the Beavers (their only Rose Bowl victory) due to wartime travel restrictions limiting Japanese Americans to 35 miles of their home. 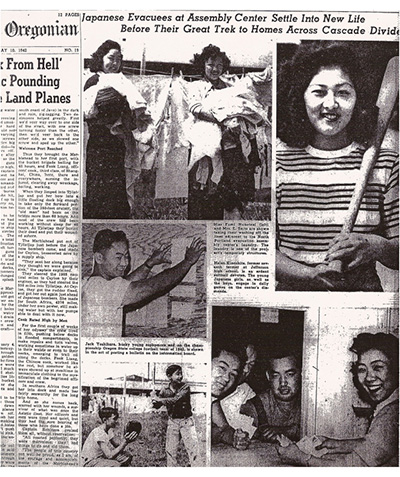 In this May 10, 1942, issue of The Oregonian, the de facto propaganda photo feature caption reads, in part, “The young Japanese girls, as well as the boys, engage in daily games on the center’s diamond.” One of the internees shown at the Portland Assembly Center is Jack Yoshihara, who had been a sophomore on the 1941 Oregon State Beavers championship football team. But Yoshihara had not been allowed to play in the January 1, 1942, Rose Bowl game (won by the Beavers, OSU’s only Rose Bowl victory) due to wartime travel restrictions limiting Japanese Americans to 35 miles of their home.Nearly 4,000 innocent men, women, children and seniors from Portland and beyond were imprisoned behind the closed wire and the armed guards of the Portland Assembly Center (an Orwellian moniker if there ever was one) on the present-day site of the Portland Metropolitan Exposition Center. This took place from May through September in that first full year of US involvement in WWII.

Only there was no Expo Center back then. It was, in fact, the Pacific International Livestock Exposition. That’s right, a cattle yard. The camp facilities were hurriedly constructed atop manure-laced soil that reeked throughout much of that long, hot summer of 1942.

Executive Order 9066 issued on February 19, 1942, by President Franklin D. Roosevelt set off a series ofactions ultimately forcing more than 110,000 Japanese and Americans of Japanese descent into isolated military-style camps in Western desert areas for the duration of the war. Prior to their final destinations,the internees from California, Oregon and Washington State were first ordered to report to temporary Assembly Centers, a total of 16 locations up and down the West Coast. The Portland Assembly Center was one of those feeder concentration camps.

About half of the local deportees are said to have relocated elsewhere and never returned home.

What Portland City Council can do today is pass a new resolution – an official apology – that will formally and officially rescind those made after Pearl Harbor, especially those urging the federal government to proceed with mass internment of “Japanese nationals and persons of Japanese descent irrespective of American citizenship” for the duration of WWII.

And The Oregonian should post a front-page editorial recognizing its full support of the unjustifiedinternments, identify how it became a government propaganda tool and formally and explicitly apologizeto the entire city – and especially the still-living residents who experienced this foul chapter of our collective American experience.

In its infamous February 26, 1942, editorialdirectly addressed to the Congressional hearing that day inPortland, “For the Tolan Committee,” The Oregonian commentary mostly opines about details pertaining to one of its two main points: “As we see it, it is absolutely essential that the (Japanese) aliens be evacuated, and that they be transferred inland beyond the Pacific coast forest belt.”

The editorial notes that Oregon had about 4,300 “Japanese, of whom some 1,900 are aliens.” Of course, that means the majority of the people in this matter were, in fact, American citizens.

The editorial goes on to say:

“In the matter of the Japanese who are American citizens, the problem is far more difficult. It is a hard decision, in view of our traditions, to take action against men and women upon whom citizenship has been conferred. But we cannot overlook the fact that dual citizenship has been discovered in a number ofinstances – and America is fighting for its life. The Army will have to decide in this particular. All we can say is that the Army must not be wrong.

There is no mention of right or wrong, of guilt or innocence here – just that “citizenship” normally offers some type of defense, according to our “traditions” (with no mention of law or legal standing) against thecoming unnamed evacuation and internment “action.” Tellingly, the commentary says nothing about natural-born American citizen children of Japanese parents, only adults whose citizenship has been “conferred,” in other words bestowed by a supposedly generous people willing to offer such an important status.

The editorial leaves no doubt that it supports the “hard decision” to remove (and thereafter intern) all Japanese Americans, citizens or not. But the paper, finally, in the end, shockingly abdicates its editorial responsibility by stating the military “will have to decide in this particular.” But the piece concludes that “the Army must not be wrong.” In other words, it has to get this right. With everything just noted, even though it won’t spell out the words, there is no doubt what The Oregonian has decided is the right decision.

On November 24, 2015, President Barack Obama presented to the family of the late lawyer and civil rights leader Minoru “Min” Yasui the Presidential Medal of Freedom. Yasui began his lifelong pursuit ofhuman rights by challenging wartime ethnic curfews in Portland, was jailed and interned at the city’s very own concentration camp.

If the president can recognize the life’s work of Minoru Yasui, it is well past time that the city ofPortland and its newspaper of record officially recognize and apologize for their role in this miserable local racist nightmare.

Even Roanoke, Virginia Mayor David Bowers has apologized for his recent remarks citing the WWIIinternments as part of his twisted reasoning to deny Syrians refugees access to that town. Time for ourPortland institutions to finally atone for their far worse injuries.

Lawrence J. Maushard is an author and journalist living in Portland. More of his work at www.maushard.wordpress.com