(Photo: Shawn Clover / Flickr)You might have heard that “austerity is dead.” You’ll certainly be hearing it, and with good reason: the U.S. deficit is down more than 50 percent from what President Bush left behind, projections of the rise in medical costs that drove future deficits are way down, the “intellectual foundation” that justified the push for cutting government has collapsed (as if it ever existed), and the European experiment has shown that budget cuts really just make things worse – much, much worse – and cause misery and suffering to boot. Meanwhile we have two real problems to worry about: unemployment and crumbling infrastructure. So can we hire people to fix the infrastructure now?

Economists Had Learned How To Revive A Falling Economy

Before the financial collapse economists had nailed down the way to get out of an economic crisis: Government has to spend to pick up the drop in demand caused by businesses and consumers cutting back. This investment into the economy causes businesses to hire again, which helps people to be able to spend again, and after things recover the resulting growth pays off that investment.

The Great Depression in particular had taught us that a downward spiral could develop in which a drop in demand caused businesses to cut back, lay people off and/or cut wages, and of course this caused people to have to cut back, which meant demand dropped even more so businesses laid off more people, so demand dropped more, etc.

The FDR administration tried various things to stop this spiral and found that programs that injected money into the economy, such as unemployment benefits and other assistance, direct hiring, investments in infrastructure, etc., could turn things around. And then after things turned around we had all that new, modern infrastructure driving continuing economic growth!

At the end of the ‘W’ Bush administration the economy was again in free fall. (Thanks George!) The month President Obama took office the economy lost more than 800,000 jobs. The new Obama administration pushed through a “stimulus” program that included infrastructure investment, tax cuts, and money to help states avoid laying off teachers, police, etc. See if you can spot on this chart the point where the stimulus “kicked in.” (Click for larger and details.) 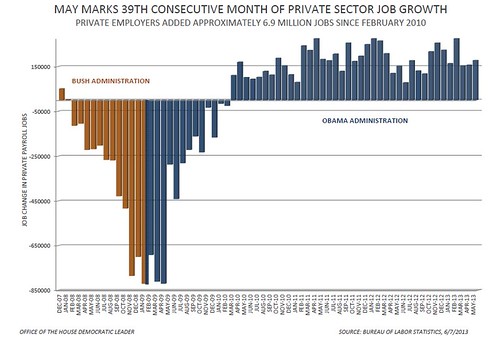 That’s right, the point where things suddenly turn around and that deep ‘V’ starts back up – that’s when the stimulus kicked in. It worked. It wasn’t enough, but it worked.

The “Serious People” Threw Out What Had Been Learned

Somehow, even with this obvious evidence that the stimulus worked the “serious people” in Europe and America threw out what economists had learned about how to get out of an economic crisis and demanded budget cuts instead. They actually claimed, in the face of the economy collapse, that the unemployment and slow economy was the result of “government spending.” They actually claimed that taking government money out of the economy would somehow help the economy.

Since 2010 Republicans have blocked further stimulus, claiming that we have a deficit emergency and “we’re broke.” In fact, they have forced deep cuts in spending, including the destructive “sequester” that is forcing down the level of recovery and looks like it will cost as many as 750,000 jobs just this year. And after this year it gets worse.

Republicans have even blocked efforts to just maintain the nation’s crumbling infrastructure, calling it “more government spending.” More on this in a minute.

The austerity was especially harsh in European countries like Greece. They imposed terrible budget cuts with the idea that these cuts would lead to a revival of their economy. They laid people off, cut people’s wages, took people’s pensions, took away people’s health care, sold off public assets, and imposed other restrictions.

This caused great suffering, even including suicides. Unemployment soared, rising in Greece to over 26 percent, in Spain to over 25 percent and currently over 12 percentmeasured Europe-wide.

And guess what. European government spending cuts made the economies worse, which made their deficit problems worse. Taking money out of the economies actuallydidn’t help the economies grow!

Austerity – the idea that shrinking government and taking government spending out of the economy will boost the economy – was partly based on the work of economists Carmen Reinhart and Kenneth Rogoff. They claimed that the more debt a government has, the worse their economies do, and in particular there is a cutoff line if debt reaches 90 percent of GDP, where growth really falls off. Other economists could not duplicate these results in their models, and it recently turned out that these economist not only cherry-picked their results, but their work included a spreadsheet error that, when corrected, completely undid this conclusion. So no, there is no causation relationship where increased government debt slows economic growth.

Of course, this as already obvious from observation. The Obama stimulus reversed the economic death spiral. Europe’s austerity caused their economies and deficits to get worse, not to mention the terrible human suffering that resulted. It’s too much in our face now, even the “serious people” are starting to admit it.

This $3.6 trillion is needed just to catch up, not get ahead. (Reagan tax cuts in 1981, 32 years of deferred maintenance since… it adds up.)

That $3.6 trillion worth of infrastructure repair has to be done eventually – bridges are falling down now and things will just get worse. But there are two other factors right now that should be taken into account.

1) We have millions and millions of people who need jobs.

2) We can get the money at just about the lowest rates in history. Interest rates are very, very low for government borrowing right now.

3) After we bring our infrastructure up to date we will have a shiny new, efficient and energy-efficient national infrastructure to support American competitiveness. The economy will boom.

So we have this work that needs to be done anyway. We have millions of people who need work to do. We can get the money at very low cost. And the economy needs a kick.

Austerity is dead. Can we fix the economy NOW?