Income inequality is rising in almost every country on earth — and especially in the world’s four most populous countries.

In China personal income has become so highly concentrated that this formerly communist country has become the world’s largest source of new billionaires. In India, the land of Mahatma Gandhi, income inequality has doubled since the country’s 1991 economic reforms.

China, India, the United States, and Indonesia have a combined population of about 3.2 billion. They account for more than 44 percent of the world’s population. The next five largest countries make up a rogue’s gallery of unequal societies: Brazil, Pakistan, Nigeria, Bangladesh, Russia.

Of the world’s ten largest countries, only Japan — at number ten — shows a moderate level of income inequality. And Mexico, the current number eleven, will soon be overtaking Japan in population. At that point, all ten of the largest countries in the world will rank among the world’s most unequal countries.

Where is all this inequality coming from? French economist Thomas Piketty offers an answer in his widely read book Capital in the Twenty-First Century. Piketty’s answer in a nutshell: Returns to capital always outstrip returns to labor. Inequality increases because money makes money faster than labor makes money. The people with the money get rich while the people who labor get left behind.

Piketty’s model certainly describes one dynamic that we’re currently seeing. The rich are getting richer. But his model can hardly be considered some kind of natural law.

Governments, after all, can tax the rich — and do all sorts of other things to advantage workers. They can raise minimum wages, promote unionization, offer free education, subsidize childcare, and all the rest. If returns to capital outstrip returns to labor, it’s because the policy environments in most countries favor rich people over workers.

With Piketty’s numbers, we can easily chart long-term inequality trends for four illustrative countries. In the United States and the United Kingdom, our chart shows, the income share of the richest 0.1 percent rose dramatically after 1980. 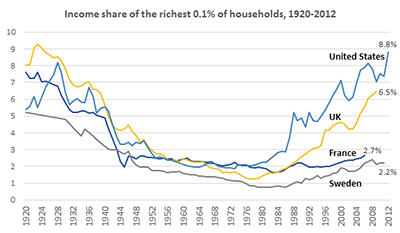 By contrast, in France and Sweden the income share of the richest 0.1 percent started rising later, and then only rose slightly.

All four of these nations had similar levels of inequality in the 1960s. By the 2000s, the four had diverged dramatically.

These data — pulled from Piketty’s own database — show that no universal law of rising inequality determines national destinies. Countries can choose to be more or less equal by shaping social and economic policies to match their political philosophies.

Since the 1980s the United States has embraced a pro-rich political philosophy. We do much less to reduce inequality than any other rich country. We choose to be unequal.

Take another look at the chart. In the early 1960s, the most unequal country of the four just happened to be France, not the United States. In the United States of the 1960s, trade unions were strong, state universities were inexpensive, school segregation was on the way out, and the economy was booming.

How things have changed! Since the 1980s union membership has collapsed, university tuition has skyrocketed, and segregation has returned with a vengeance.

And just look what all that has done to the American economy.

Starting in the 1970s, the United States chose to become a less equal country through policies that benefited the top 1 percent — or 0.1 percent — at the expense of the rest of society. Soon afterward the United Kingdom followed our lead.

China, India, and Indonesia now rate as some of the most unequal countries in the world because they want to be like us. The United States is admired around the world as the pinnacle of national economic success, and we lead by example. Unfortunately our example showers economic success on only a few rich people and leaves most everyone else to fend for themselves.

China, India, Indonesia, and others are starting to do the same. But their decisions reflect no universal law. We have a human-made disaster, one we can reverse.
To reduce inequality we don’t have to change the laws of economics. We only have to change our political philosophy. If we choose better policies — and better politicians — we will have better outcomes.

And not only us. If the United States leads the way toward policies that reduce inequality, the world will follow. We got the world into this mess. It’s up to us to get it out.