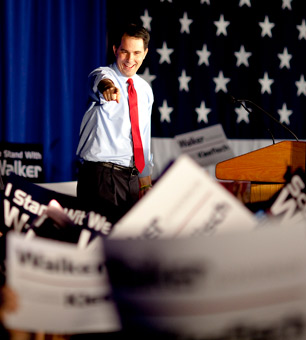 These are white, blue-collar workers, many of them union members, who left the New Deal coalition in the 1980 election to cast their ballots for the Republican, Reagan. Well, there aren’t that many union members left these days. As much as the AFL-CIO and its affiliate Working America try to put a happy face on the defeat, it is the people they want to represent – people who didn’t graduate from college – who cast more than half of their votes for the union-bashing Walker. That’s 56 percent. Whites with no college voted 61 percent for Walker. Rural Wisconsin – 33 percent of the voters – backed Walker with 60 percent of their votes and comprise a third of the election’s electorate, far more than 20 percent of the electorate who were city dwellers.

The Tea Party may be quick to take credit for these votes, but they should hold off celebrating until we get better data. In fact, Tea Party rallies in support of Walker didn’t rally many. A few thousand showed up in Racine for the big June 2 bash at the end of the Tea Party Express/Americans for Prosperity barn-raising bus tour for “economic freedom.” “Republicans are Makers, Democrats are Takers,” read one sign at the openly partisan event.

While Thomas Frank, the author of “What’s the Matter with Kansas?,” would assert that blue-collar voters of modest income are swayed from voting their class interest by conservative social issues like gay rights or abortion, this election was all about unions and economic issues. Princeton political science Professor Larry M. Bartels, who mapped the “Unequal Democracy” created by the new Gilded Age in his 2008 book of the same name, provides a better understanding of the situation. Unlike Tea Party voters, who tend to be better off and more likely to slash and burn the social safety net, less well-off voters support government action and a social safety net. But this constituency also feels abandoned by elected representatives who too often ignore them in favor of big donors, he argued. This breeds its own resentment.

If government doesn’t represent them, then why should they support the government workers who make more money than they do?

Instead of a referendum on “economic freedom” and slashing the safety net, the attack on public unions managed to focus resentment on workers who are better off than many.

As Tim Phillips, the president of the Koch-funded Americans for Prosperity, said, “Citizens recognize that some government workers have become an entitled class with far bigger pensions, better health care and far more job security than those who work in the private sector.”

This talking point was devised in regional, right-wing think tanks like the Manhattan Institute and is amazingly durable, particularly when millions are spent transmitting it over the airwaves.

This is where the big money divide between the candidates – Walker’s team outspent Barrett eight to one – made a difference. While 75 percent of union voters backed Barrett, the AFL’s intensive door-to-door ground game is much less effective in the rural outposts that gave Walker their votes. And modest income, high school grads are some of the biggest consumers of traditional television and, therefore, television campaign spots. Thirty million dollars can buy a lot of TV airtime.

As the Progressive’s Matt Rothschild wrote after the defeat, Walker’s air war managed to flip his high disapproval ratings around from last fall, giving those uncomfortable with the idea of a recall a reason to support him. Walker was further helped by the continuing drop in the state’s unemployment rate since he took office, lending credibility to his ads’ promising job growth.

The result: the overwhelming support unions had last spring didn’t show up in the election booth.

Where government jobs are disproportionately held by people of color, the “government union” talking point can also mobilize racial resentment without mentioning race. In the post-Citizens United era, with big money free to spend without limits, building worker power, income and jobs may be the only way to counter it.

Share
This article may not be republished without permission from Truthout.
Abby Scher