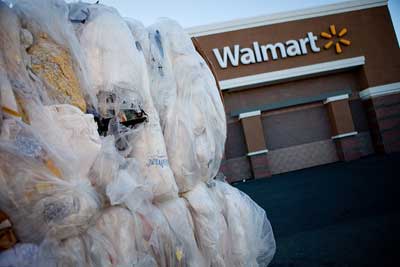 (Photo: Walmart)One-stop shopping at a discount retailer like Walmart is something Americans go for in a big way. Now, discount retailers are nothing new in a corporate capitalist system, but Walmart excels in their ability to turn a profit with a business model that shifts some of their costs to the American taxpayer. Walmart does this by paying many of their employees paltry wages that put them in an income bracket where they qualify for government assistance. So, while you as a shopper may be getting great deals on food, clothes, and other items Walmart sells, you as a taxpayer are underwriting food allowances and health benefits for many Walmart workers. Walmart is an extremely profitable company, but that economic largess has not, to use a phrase from Reaganomics, “trickled down” to their employees in the form of a living wage and affordable health benefits.

In this “Truthout Interviews” program, I had a chance to speak to Maura Stephens, a writer for Truthout and the associate director at the Park Center for Independent Media at Ithaca College, about her article, “Walmart Is Not the Bargain You Might Think.” In our discussion, we touch on a number of points she makes in her piece about the economic repercussions of Walmart’s way of doing business and how it contributes to the erosion of a middle class way of life for many Americans.