A recent NASA-funded report found that the planet could warm 20 percent more than earlier estimates. Take a look at this visualization of the warming Earth from 1950 through the end of 2013. As you can see, it’s getting warmer and warmer. And NASA scientists say that 2013 tied for the seventh-warmest year since 1880, continuing a long-term trend of rising global temperatures.

Now joining us to discuss climate change is our guest, Dahr Jamail. Dahr is a staff reporter with Truthout currently writing about the environment and climate change.

Thank you for joining us, Dahr.

DAHR JAMAIL, INVESTIGATIVE JOURNALIST AND AUTHOR: Thanks for having me. 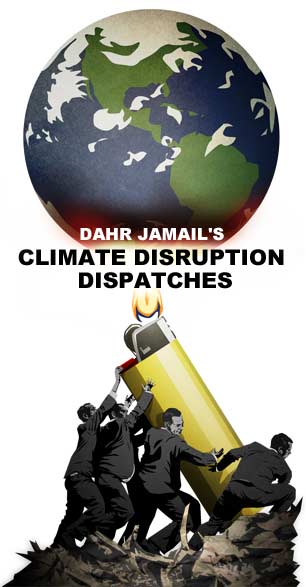 But where climate change kicks in and where we have to start making the differentiation between a normal extreme weather event and what’s starting to happen now as a result of climate change is in the intensity of the extreme weather event and the frequencies with which they’re occurring. So we’re seeing more of them and of more extreme intensity, more extreme wet weather precipitation events—flooding, like we saw in the U.K. recently; more extreme cold weather events, like the polar vortex that hit the U.S. a couple of times this winter; more extreme heat waves, like we saw in Australia this summer, where they had set record temperatures, and at one point even 100,000 bats falling out of the sky just because of the heat alone. So these types of things that we’ve just simply never seen before, these are the things that we—when scientists start saying, okay, first ever on record or it’s happening so much faster than it’s ever happened on record before. This is where we start to say, yes, climate change is having this kind of an impact.

DESVARIEUX: Dahr, in your writing, you focused a lot on the arctic. Why is it so important in terms of climate change?

JAMAIL: The Artic really is the canary in the proverbial coal mine, simply because of its latitude and the way the weather system works. We’re seeing it warming faster than anywhere else on the globe. I’ll spare the scientific details, but suffice it to say, whereas we’ve seen a 0.85 C global increase in temperatures above baseline, baseline being when the Industrial Revolution began, that’s how far, thus, we’ve warmed the planet to date. In the Arctic, it’s actually three, four, or five times that amount. We’re seeing extreme temperature fluctuations like what we saw (as NASA released a report a couple of years ago) just up in Alaska: record temperatures all across the state, a lack of snow for the Iditarod Sled Dog Race that was just run in the last couple of weeks, literally bare patches of earth that the dogs were having to pull sleds across, these kinds of things very, very evident up in the Arctic, as well as, of course, the most obvious being the increasingly dramatic effect of the shrinking of the Arctic Sea ice in the summer.

DESVARIEUX: I’m glad that you brought up NASA, because the information that scientists are presenting right now is kind of changing a bit. Like I reported in the introduction, we’re seeing NASA reporting that warming is 20 percent more than they had initially estimated. Why do we keep seeing these scientists changing their minds?

JAMAIL: Because they’re giving new information all the time, especially with NASA, they have so many ongoing studies. Literally every two, maximum three weeks we see another report from NASA that they’re focusing so heavily on the effects of climate change. So they’re giving so much more new data coming in that they’re having to constantly revise their predictions. And that’s why literally every year for at least the past ten years we’re just seeing each new successive report provides new data, so they have to update their figures. And that’s why we’re seeing these really dramatic and very, very disconcerting predictions of how fast and how intense global average temperatures are rising is being updated every single year. And so one of the more recent reports I’ve seen is that we could see as much as a six degree C increase just in the next 30 years, and keeping in mind that humans have never lived on a planet at 3.5 C or above baseline, and, again, we’re at 0.85 C, and it’s increasing rapidly.

DESVARIEUX: Dahr, you’re a journalist, I’m a journalist, and as we both know, you really don’t see climate change being tackled in the mainstream press that often. I want to get your thoughts, though, on why do you think the message isn’t really getting out about how extreme and dangerous the situation is.

JAMAIL: Well, as one climate change scientist I interviewed said, well, there’s just not a whole lot of money to be made when it comes to really getting out the fact of how extreme the situation is, because we—the Western-based economy of industrialization is based on fossil fuels, and we’re smack against the fossil fuel lobby, the Koch brothers, other Exxon-funded studies and scientists that they put out there, the climate change denial movement. It’s been very, very effective at leveraging its weight against the mainstream media, especially in the United States, whereas in much of the rest of the world, we don’t really run into this, we don’t really—even over in the Middle East there really isn’t debate, even here in Qatar, where I’m speaking from right now, you really—even in Qatar, which is one of the biggest fossil fuel states if not the biggest on the planet, there’s no debate. It’s just accepted as fact, and what’s going to be done to deal with it. But in the U.S., especially with the oil-funded groups, the climate change denial movement is very, very powerful. And that, of course, affects the politicians on up all the way to the White House, and, of course, the mainstream media follows suit. So we don’t really see accurate reporting on, really, the severity of the crisis that demands radical action be taken immediately.

JAMAIL: I don’t think they even begin to touch the problem. If we just talk specifically about the famous scientist James Hansen, who’s been blowing the whistle about climate change for many, many years now, he’s of course with NASA’s Goddard Institute for Space Studies and now associated with Columbia University, and he’s the person who said, look, if we continue, if we extract all of the tar sands oil from Canada and burn that and emit that into the atmosphere, we are absolutely at game over with climate change. There’s nothing we’ll be able to do whatsoever to even begin to mitigate how bad it’s going to be for future generations. And yet you have Obama even contemplating passing, making allowable the Keystone XL Pipeline, which really, frankly, is going to be very, very surprising if he doesn’t allow it to move forward. Of course, there is already oil flowing out of the tar sands. But he’s basically in a position to either put a big dent in how much oil is going to keep coming out or allow it to increase, and it certainly looks like he’s positioning himself to allow it to increase.

And the reality is, if he was serious about climate change, he wouldn’t think twice about it; he would cancel any future expansion of the Keystone XL program, as well as instituting a full-scale wartime response across the U.S., and as much of the Western world as possible, to start making the dramatic changes necessary to shift over to renewable energy sources and get off fossil fuels immediately. That’s really—many of the scientists I’m talking with, they say that is how far progressed we are, that’s where we’re at, that’s what needs to happen, and compare that to what we’re seeing Obama do today.

DESVARIEUX: Alright. Dahr Jamail, investigative reporter and author, thank you so much for joining us.