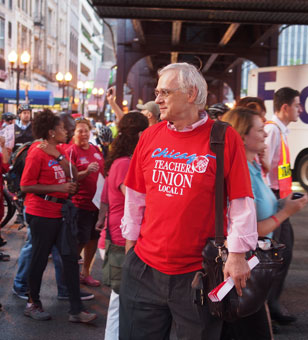 (Photo: Bartosz Brzezinski / Flickr)Don’t take your eyes off Chicago yet. The NATO protests may be over, but city politics are heating up. Chicago’s Public School teachers are negotiating a new contract, and an impasse could lead to the first teachers strike in the city since 1987. The target of the teachers’ ire is Mayor Rahm Emanuel and a regimen of change that dates back to the days of now Secretary of Education, Arne Duncan. A strike before November? Teachers say they are ready for it. Their union is under new leadership and new allies, like Progress Illinois and Occupy Chicago, are at their back. Immediately following the NATO protests, the CTU is holding what it says will be a historic rally and march on the city Board of Education.

Like teachers across the country, the Chicago Teachers Union has come under attack for years. Schools have seen layoffs, new standardized tests and no end of complaints about performance. (Some of the best—and the worst—public schools in the state are in Chicago.) Now Mayor Emanuel and his superintendent Jean-Claude Brizard are demanding (among other things) a roughly 20 percent longer school day and a new, merit-based pay system—along with a 2 percent pay raise. It’s not enough to win over the Chicago Teachers Union. In fact, it has fired them up, and their allies too.

Back in December an Occupy inspired “mic-check” of a Board of Education meeting held up business for hours.. On Wednesday, May 23rd, thousands of teachers plan to march with their allies to the Board of Education after school,. All rumors to the contrary, the CTU say they’re not holding a vote on a strike – not yet. They are showing their strength. A new state law requires a fact-finding review and a 75 percent vote to authorize a strike, and the CTU say their informal polls show they have that and more. Their contract expires June 30.

Chicago Teachers Union Vice President Jesse Sharkey, who was elected in 2010 with a slate of new leaders, said at a press conference Tuesday, “There is no funding for a longer day.” The CTU has put forward its own reform plan, which includes infrastructure improvements, smaller classes and more professional development. “There are 160 schools with no libraries,” noted Sharkey, even as “the city is opening sixty new charter schools.”

Sharkey’s comments echoed those of Chicago teacher Jennifer Johnson, who addressed the Labor Notes conference in the city earlier this month. Johnson teaches history at Lincoln Park High School in North Chicago, a diverse public neighborhood school that also has selective enrollment. Johnson’s father and grandfather were both teachers. She loves her job, but she’ll strike if she has to, she told me. It’d be “doing justice” to her pupils.