You are supporting the habits of the rich in more ways than you know, including their love of water views.

Readers may recall that we wrote about the Biggert-Waters Act, a bill to address rising losses in a Federal flood insurance program that had run on a self-supporting basis until the late 2000s. As New Jersey Spotlight explained:

Congress created the National Flood Insurance Program in the late 1960s after Hurricane Betsy hit New Orleans, causing over a billion dollars in damage. Flood insurance was nearly impossible to secure from the private market, so lawmakers felt the federal government had a duty to step in and provide help to residents along the coast. The program was set up to be self-sustaining, borrowing from the U.S. Treasury only when necessary, and it generally worked for several decades. But beginning in 2005, Hurricanes Katrina, Rita, Wilma and several other storms caused it to blow through its budget and go $24 billion in debt.

The mandated increases under Biggert-Waters started hitting at the same time when FEMA issued new flood maps. This is a periodic process, but the latest version reflected recent experience with more frequent and severe storms. As a result, people whose homes had never been in floodplains (and hence required to buy insurance) were newly included,. Those already in a flood area saw their premiums increase, at a minimum due to Biggert-Waters, plus many were hit by having their home moved into a higher risk category. The result was many faced increases of tens of thousands of dollars in annual premiums. For instance, a Bloomberg headline wailed about seven-fold increases; a NOLA story about St. Tammany Parish listed several cases of more than ten times premium increases.

Biggert-Waters is in the process of being cut down into something that causes homeowners less pain, meaning taxpayers will now as a matter of policy (as opposed to by accident) be subsidizing coastal homes. The Senate passed a bill that would delay rate hikes (those to cover the $24 billion shortfall) by four years. Ooh, but the bill expires in four years! House members want some modifications in the Senate bill, but odds are high that some form of relief or de facto termination of the bill will take place. And some of the rate changes related to the flood map redo are being deferred. CNBC reported that:

Certain homeowners who met previous flooding codes that have since been revised won’t see premium hikes for up to two years—but only because a recent spending bill passed by Congress keeps the agency from using funds to implement the hikes.

But there were some people who managed to insulate themselves from these rate increases: the wealthy who petitioned FEMA for a break. In some cases, these properties had already gotten large insurance payouts in previous storms, and had less well heeled, well connected neighbors who got no rate relief. From NBC (hat tip DB):

As homeowners around the nation protest skyrocketing premiums for federal flood insurance, the Federal Emergency Management Agency has quietly moved the lines on its flood maps to benefit hundreds of oceanfront condo buildings and million-dollar homes, according to an analysis of federal records by NBC News.

The changes shift the financial burden for the next destructive hurricane, tsunami or tropical storm onto the neighbors of these wealthy beach-dwellers — and ultimately onto all American taxpayers.

In more than 500 instances from the Gulf of Alaska to Bar Harbor, Maine, FEMA has remapped waterfront properties from the highest-risk flood zone, saving the owners as much as 97 percent on the premiums they pay into the financially strained National Flood Insurance Program.

NBC News also found that FEMA has redrawn maps even for properties that have repeatedly filed claims for flood losses from previous storms..

And FEMA has given property owners a break even when the changes are opposed by the town hall official in charge of flood control.

That’s why flood maps show most of this beach as a “coastal velocity wave zone,” the area with the highest risk of damage from storm surge…From 2011 through 2013, FEMA granted applications remapping 66 out of 72 waterfront condo towers in Gulf Shores to lower-risk flood zones or off the flood maps entirely. Four others have applications pending. Just two applications have been denied. And next door in Orange Beach, the map lines have been redrawn around four high-rise condo buildings.

One condo (a large highrise building) had its premiums reduced by 94%, another by 97%. Neighboring single family homes got no reductions, and some pay premiums several times as large as that of entire condo towers.

The illustrations come from all over the US and include: 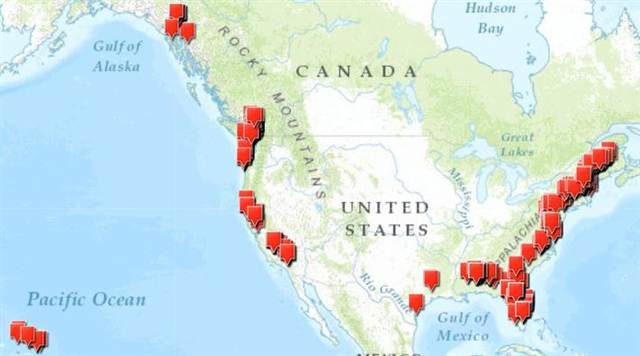 A $4 million Hamptons vacation home for an investment manager

A $19 million residence of a former CEO in Naples, Florida

A tony neighborhood in Hatteras Island

And these gifts don’t stop giving. Emphasis ours:

Giving property owners a method for correcting errors on flood maps is perfectly reasonable, according to national specialists in flood insurance. But considering coastal properties with a history of flooding as low risk has inevitable results, they say:

The owners pay less into the national flood insurance program, where a reduced risk typically means a lower premium. Depending on when the map change is issued, the owners may receive refunds of premiums for the current year and the previous year.

If these properties are damaged in the next hurricane, nor’easter or tsunami, they’re still insured by the national flood program, up to $250,000 in damage to a single-family home, or $250,000 per unit for a condo building, which could add up to $100 million for a high-rise with 400 units…

Being in a less-restrictive flood zone allows owners to use lower construction standards, avoiding breakaway walls and sinking piers and pilings deep into the ground. Such shortcuts encourage overbuilding along the coastline, further increasing the risk to taxpayers.

The condo provision is a doozy, since a flood is presumably only going to damage common areas, any building infrastructure below or at ground, and lower floor units. The insurance per unit provision means the coverage for the units on the higher floors that will not be affected effectively provides a vastly greater effective coverage to these apartment towers than to low rises or single-family homes. Charming.

The next show in this NBC series profiles one of the people who negotiates these super duper discounts for the rich. Stay tuned.