Last spring, I was invited to give a handful of talks in Athens and Thessaloniki on the Occupy movement. Not long after I returned to New York City, it was revealed that the Greek neo-Nazi party, Golden Dawn – now the country’s third-largest, with the electoral backing of half the country’s police force – had established something of a diplomatic mission, setting up offices in Montreal, Sydney and smack in my backyard in the Queens neighborhood of Astoria. A swift organizing effort kicked off in response, and Golden Dawn backers were promptly stripped of their office space in a local Greek community center, but not before they managed to solicit donations of money and clothing from local businesses “for struggling Greek families.” So I returned to Athens to check in with anti-fascist organizers about the work happening in Astoria, and to get feedback about how to better synchronize our efforts.

Even more cartoonish than Golden Dawn’s well-publicized, thuggish petulance (both in and outside of parliament) are its attempts to position itself as a salve to Greece’s austerity woes at the grassroots level. Free food distribution has been set up in parks à la Food Not Bombs, with the caveat of being “for Greeks only.” Despite little evidence of support or participation from medical practitioners (indeed, doctors have collectively refused to withhold treatment from immigrants), the party recently announced its own health project: the laughably titled Doctors With Borders. However little substance there may be to these projects, and however cynical, the public relations effect is real. Golden Dawn markets the notion that its opposition to austerity extends beyond merely scapegoating immigrants, homosexuals and others; the party presents itself as a tangible antidote to the country’s suffering and the government’s seeming determination to worsen it at the behest of international lenders.

Students of post-WWI Germany likely see little new in Golden Dawn’s strategy. Fascism has historically emerged from the splintered beams of economic wreckage and failed states, mobilizing widespread anxieties, circulating a currency of idealized national identity as a buffer against shame and defeat. What’s less well-understood in Greece’s case is that Golden Dawn has set about this process, in part, by aping efforts on the other end of the political spectrum, dating back to the winter of 2008, when the police murder of 15-year-old Alexandros Grigoropoulos sparked riots across the country. 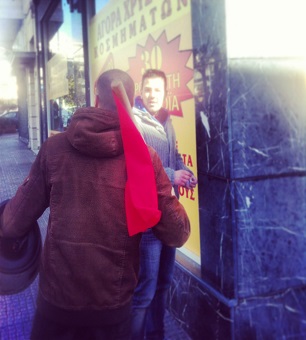 Anarchist confronts a gold-buy-back proprietor, who was caught trying to take down antifascist flyers. (Photo: Joshua Stephens)“On the first day of the uprising, we smashed the police stations,” an anarchist in Thessaloniki told me last spring. “On the second, we smashed the banks. On the third, there was nothing left to smash, and we were suddenly faced with the fact that we didn’t really know what to do.” It seems to have been a widespread frustration. The occupations of academic and political institutions that occurred amidst the uprising gave way to what are called Popular Assemblies in some 70 neighborhoods across Athens. About half of these are still operating, composed of an often unlikely spectrum of participants. Anarchists, local workers, even municipal employees and officeholders all collaborate off the political grid in democratically administering needs, redistributing available resources and bolstering existing struggles – against both austerity and the steady creep of fascism.

Their strategy can be read in a short 1958 article by Colin Ward in the British anarchist journal Freedom, entitled “The Unwritten Handbook”: “(T)he choice between libertarian and authoritarian solutions occurs every day and in every way, and the extent to which we choose, or accept … or lack the imagination and inventiveness to discover alternatives to the authoritarian solutions to small problems is the extent to which are their powerless victims in big affairs.” When a round of austerity measures included a new – and often unaffordable – property tax in electricity bills, many Greeks saw their power abruptly cut. Popular Assemblies began compiling lists of households without power, ranking them based on vulnerability (age, the presence of infants, etc), and deploying qualified people to restore electricity, illegally.

On a cool April evening in the neighborhood of Peristeri, assembly participants debated models for localizing economic transactions through alternative currencies and non-monetary programs like time-banks. Over drinks following a talk I gave last spring, the bulk of the questions from local anarchists – known the world over for bravado and street warfare – were about Community Supported Agriculture (CSA) programs, an overwhelmingly liberal phenomena back home, hardly considered political (much less radical). In Greece, however, forging direct relationships with the agricultural sector amounts to a fuck-you to the International Monetary Fund and its threats of import cutoffs, issued to leverage passage of austerity measures. 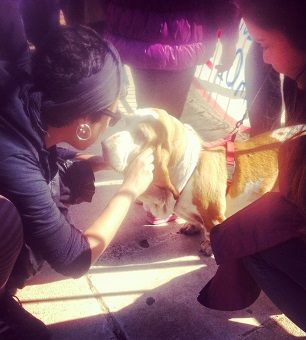 During my few days on the ground in Athens this trip, I was invited to an anti-fascist march organized by the Popular Assemblies of south Athens. It marked what felt like an expansion of their role into directly confronting Golden Dawn, where the state has proved either unwilling or unable to tread. “If we don’t resist in every neighborhood, they will soon become our prisons” could be heard reverberating off the facades of buildings. Counting by tens, I estimated roughly a thousand marching from the commercial plaza adjacent to the Dafni Metro, winding through a number of its various neighborhoods before reaching a former military installation occupied and renamed Asyrmatos – Greek for “wireless,” referring to the towering antennas jutting out of what is now a sizable community garden and community-managed conservatory.

In the adjacent neighborhood of Aghios Dimitrios, where much of the march was organized, the Popular Assembly meets weekly in the theatrical space of a local municipal building. On the surface, it appears quite innocuous, as though it’s scheduled through an arrangement with the local government. I was surprised to learn that each week’s meeting is a sort of micro-occupation; participants simply walk in and seize the space, with zero visible pushback from employees, and no police response. “In 2008 (during the uprising), we seized the building for a month,” one local told me. “So, I think that, for them, two hours a week is a bargain.”

The oldest Popular Assembly in Athens operates in the neighborhood of Petralona, the site of a recent, widely publicized murder of a Pakistani man at the hands of fascists. When I visited with them last spring, they were opening a kitchen and cafe space for educating people about nutrition and food production, and operating an extensive calendar of peer-led health and mental health events, inspired in part by Mexico’s Zapatistas. Today, they operate medical, dental and eye clinics – in coordination with other Popular Assemblies, based on non-monetary mutual aid. 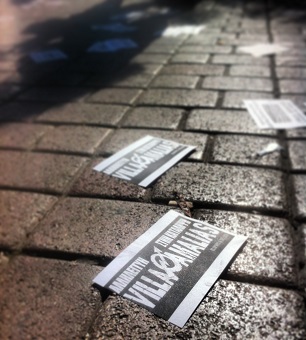 Flyers in solidarity with recently-raided Athens squats. (Photo: Joshua Stephens)As we weaved through commercial corridors and narrow neighborhood arteries last week, all of this seemed to be shifting from a sort of quiet mode of survival into an overt assertion of power. Scattered action commanded the attention of onlookers. Quarter-sheet fliers were tossed into open bus windows, open supermarkets and even into the day’s light breeze, scattering like ticker tape. Two masked young women darted out of the crowd periodically, spray-painting a stencil onto walls featuring a sort of close-up frontal image of a boy with his fist forward, reading “The sons of Adolf will receive a red and black punch” (a reference to the colors of the traditional anarchist flag). The smell of fresh spray paint hung in the air, the fire to its smoke appearing on walls, the sides of buses, and – a newly favorite target in the country’s crisis – establishments set up to buy people’s gold. These entrepreneurs are referred to as mavragoriters – a term coined during Greece’s years under Nazi occupation. “They were Greeks, usually friends of or sympathetic to the Nazis, and they took advantage of the crisis and the starvation that existed all over the country,” explained a young woman, who asked not to be named. “It reached a point where they were buying houses in exchange for two bottles of olive oil, or quantities of rice.”

The subtext of the young woman’s description seems the soul of the Popular Assemblies: dignity. She later pointed me to a communiqué posted at Indymedia Athens, in which anarchists in the city set about countering the neoliberal mantra heard around the country, and the ethics of the mavragoriters – “No job is a shame.” The Popular Assemblies appear to operate from the inverse that appears in the communiqué “Shame is not a job.” Surviving merely to revive histories of foreign occupation or homegrown fascism, for them, is a path without hope.

Share
Copyright, Truthout. May not be reprinted without permission.
Joshua Stephens

Joshua Stephens is a board member with the Institute for Anarchist Studies, and has been active in anti-capitalist and international solidarity movements across the last two decades. He writes on antiauthoritarian social movements for various outlets, splitting his time between the Mediterranean and Brooklyn, NY.