A division of the World Health Organization declared CBD oil to be safe, with many potential benefits, and recommended that it should remain fully legal.

The recommendations came in a report from the Expert Committee on Drug Dependence (ECDD), which advises the global body on how to handle various substances that could be addictive or otherwise harmful.

The authors were unambiguous about their assessment: “In humans, CBD exhibits no effects indicative of any abuse or dependence potential.”

The report also outlines numerous potential benefits of CBD, though the authors emphasized that more research is needed. The findings are an important sign of the shift in attitudes toward this beneficial extract, which thousands of people use regularly. It also places WHO policy at odds with that of the United States: last year, the Drug Enforcement Agency issued frightening statements insisting that CBD remains illegal.

CBD oil is a nutritional supplement made from agricultural hemp, a close relative of psychoactive cannabis, or marijuana, the substance that people consume to feel high. By contrast, while CBD causes few if any side effects, a growing body of evidence suggests it could help conditions ranging from depression to some forms of chronic pain. The hemp industry has promised to fight the DEA in court, if necessary, and so far individual consumers haven’t faced legal trouble as a result of buying CBD-only products.

As we’ll explain below, we believe the latest findings from the WHO could be an important part of changing how CBD is treated, worldwide.

WHO: “CBD Is Not Associated With Abuse” but Has Great Healing Potential

The ECDD’s report was actually published in November, but received renewed attention from policy makers and in the media after the Dec. 13 publication of a set of the committee’s recommendations for various narcotic substances. The committee raised a serious alarm about the risks posed by carfentanil, a dangerous synthetic opioid similar to the notorious fentanyl, but their response to CBD was sharply different.

While the ECDD wants to see the strictest possible controls put on carfentanil and other synthetic opioids, they argued that CBD should remain totally legal and recommended further investigation of its potential benefits.

The ECCD’s report on CBD goes even further, both in suggesting that CBD is safe for human consumption and that CBD has many potential benefits that deserve deeper research.

“CBD is not associated with abuse potential,” the authors wrote. They also reported that numerous studies have found that CBD is nontoxic with few side effects. Preliminary research, they noted, even suggests that CBD “has no effect on embryonic development.”

Just as importantly, the report acknowledges the growing body of scientific evidence which suggests CBD has great healing potential. “The clinical use of CBD is most advanced in the treatment of epilepsy.”

Many epilepsy sufferers, including children with forms of epilepsy that are difficult to treat through conventional means, have discovered that CBD can offer sometimes significant relief to their symptoms.

“There is also evidence that CBD may be a useful treatment for a number of other medical conditions,” noted the ECCD. “However, this research is considerably less advanced than for treatment of epilepsy.”

Additionally, the “diverse” range of conditions for which CBD has been considered by scientists as a possible treatment is “consistent with its neuroprotective, antiepileptic, hypoxia-ischemia [controlling the flow of oxygen], anxiolytic, antipsychotic, analgesic [pain relieving], anti-inflammatory, anti-asthmatic and anti-tumor properties.”

The authors add that CBD might even help with tobacco and other forms of drug addiction. The report also includes a rather remarkable chart outlining all of CBD’s potential benefits: 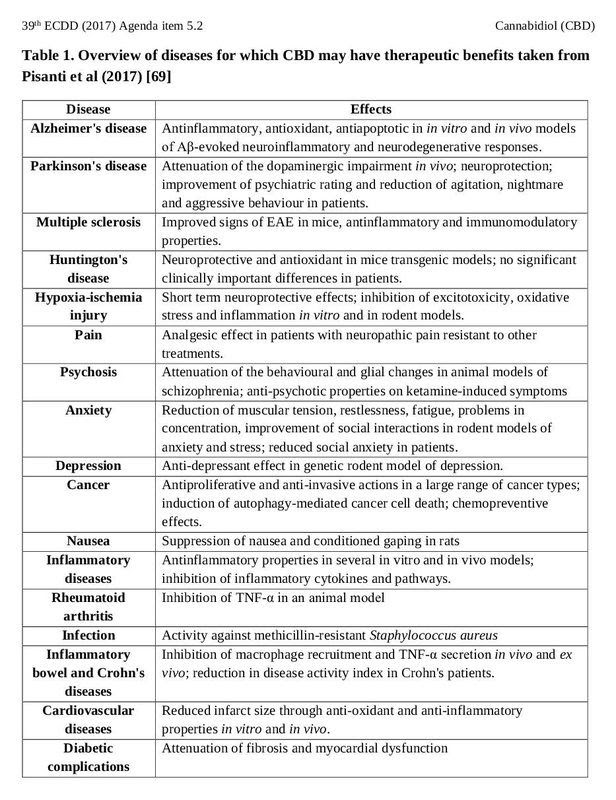 The ECCD’s primary role is to advise the WHO and its member governments (including the US) about how to handle mind-altering substances. Based on their recommendations, drugs are “scheduled,” or listed in the Single Convention on Narcotic Drugs, a 1961 international agreement that determines which drugs are illegal, and which are considered to have medical benefits despite their risks.

By recommending that CBD oil remain unscheduled, the ECCD sends a powerful message to the global community that CBD should be legal. While stopping short of openly recommending the use of CBD, the WHO also clearly expressed the need for more investigation into CBD and other similar “cannabinoid” substances.

It’s not the only recent sign of thawing international attitudes toward CBD. As previously reported by Ministry of Hemp, the World Anti-Doping Agency, which sets global policy for substance use in sports, will allow athletes to use CBD starting in 2018.

Meanwhile, in the US, the debate rages on between hemp advocates who say CBD is both legal and beneficial and government officials who insist it is, and should remain, a “Schedule I” substance — in other words, an illegal drug deemed to have no medical benefit whatsoever.

We believe there’s every reason to hope that the overwhelming body of scientific evidence about the benefits of CBD, and the support of influential bodies like the WHO, will eventually force the United States to reevaluate its stance too. Thanks to the ECCD and so many passionate advocates for legalization, It’s only a matter of time before CBD, and cannabis in all its forms, are fully embraced as a miraculous gift to humanity.

It’s legal to grow industrial hemp in Colorado, but many farmers are breaking the law if they try to water their crops. There’s no CBD in your kid’s trick or treat bag.