A number of people have asked me to respond to a recent Wall Street Journal op-ed written by Phil Gramm, the former United States senator from Texas, and Glenn Hubbard, the dean of Columbia University’s business school, about the Reagan recovery versus the Obama recovery, and why it proves that right-wing economics roolz.

But I already did respond. When? In February 2008 — back when people like Mr. Hubbard and Mr. Gramm were denying that there was any recession at all. In fact, Mr. Gramm declared that all we had was a “mental recession,” and that America had become a “nation of whiners” in an interview published in The Washington Times on July 9, 2008.

So, more than four years ago I predicted a very slow recovery. Why? Because recessions like those of 1990-1991, 2001 and 2007-2009 have very different origins from recessions like those of 1974-1975 or the double-dip recession of 1979-1982. The old recessions were more or less deliberately created by the Federal Reserve via tight money in order to control inflation, which meant that you had a V-shaped recovery once the Fed decided that we had suffered enough and it loosened the reins. The new recessions all reflected private-sector overreach, which is much harder to make up for.

Note that while I predicted a slow recovery way back when, it has been even slower than I expected. But that’s no mystery; at that point neither I nor anyone else knew just how far the private sector had overreached, plus I didn’t expect the unprecedented fiscal austerity that has been such a drag on recovery given the fact that we’re in a liquidity trap.

And yes, it is frustrating that the economic crisis is redounding to the political benefit of people who have been wrong about absolutely everything, whereas people like me may not have been right about everything, but have accumulated a pretty darn good track record over the past five years.

Not a connection you expected anyone to make. But there’s something there.

You see, there has been some back and forth over Mitt Romney’s job-creation record as governor of Massachusetts. The truth is that governors don’t have much impact on such things, but for what it’s worth, job creation in Massachusetts was lousy. The response of Mr. Romney’s campaign has been to cite the state’s low unemployment rate when he left office; the response to the response is that this was due to people leaving the state.

Now, there’s nothing wrong with labor mobility, but driving down unemployment by getting people to move someplace else isn’t exactly a recipe for national recovery. 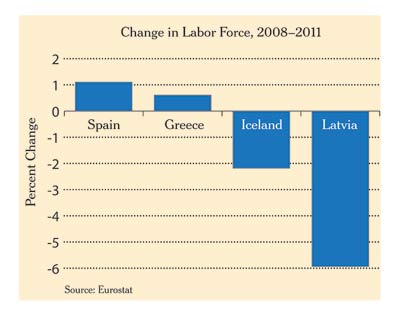 Which brings us to Latvia, where unemployment, though still very high, has come down. But this has a lot to do with a huge fall in the labor force, driven to an important extent by emigration. See the chart, with data from Eurostat.

Again, nothing wrong with labor mobility — but if Latvia is supposed to be a role model, somehow having all of Europe move to someplace else in Europe doesn’t quite seem like a sustainable proposition.