On Oct. 24, a number of activist groups came together to shut down the International Association of Chiefs of Police (IACP) Conference in Chicago. The conference shutdown lasted over four hours, after which more than 66 protesters were arrested.

The IACP conference, which took place at Chicago’s McCormick Place convention center, had more than 16,000 attendees, including police chiefs from all across the world.

Chicago Mayor Rahm Emanuel and Chicago Police Superintendent Garry McCarthy had the nerve to invite this conference to Chicago after they closed 50 public schools and half of our mental health centers. These officials have continuously showed us that they don’t care about Black lives and voices. They should have known we were going to do something about it. 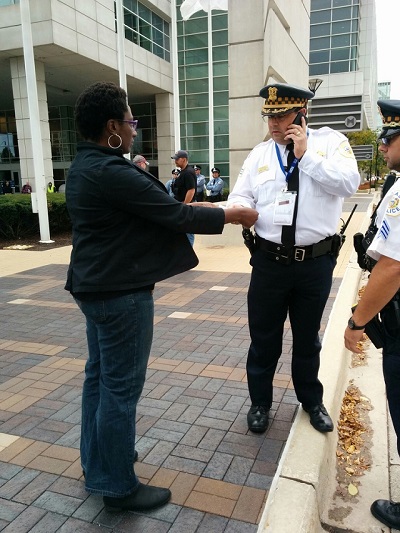 Activist Atena Danner handed the police a letter, written by the authors of this article, that explained, “Your conference is not what justice looks like.” (Photo: Kelly Hayes)Last weekend’s action was led by Black Youth Project 100 (BYP100), and a number of other organizations participated in coordinating it, including Assata’s Daughters, We Charge Genocide, Lifted Voices, #Not1More and Organized Communities Against Deportations. The action involved several simultaneous strategies: While a march and rally were going on, there were also five large groups of people assigned to shut down parts of the conference (a main hallway within the building, as well as street intersections outside). During this part of the action, protesters used tools like “lockboxes” (PVC pipes that people are locked into via chains, locks, and screws/bolts) to support the blockade.

Protesters used creative strategies to keep the shutdown going. For example, Cairá Lee Conner, a member of Assata’s Daughters – an intergenerational organization for the advancement of Black women and girls – tied herself to the top of a ladder. Meanwhile, two people stood at each side of the ladder with bicycle U-locks around their necks, and with lockboxes (decorated with names of those killed by the police) latched onto their arms. This group occupied their intersection for about four hours. Others occupied their spaces for between two and a half hours and five hours.

As part of the action, we (the authors of this article) wrote a letter to the police, directed at those who attended the IACP Conference and all police in general. This letterwas presented by one of the action teams to the police who arrived to make arrests.

We ended the letter with the question, “What side are you on? Make your decisions because we won’t stop.” 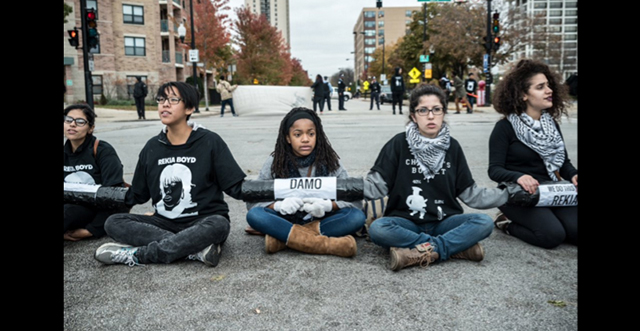 Protesters sit linked together with lockboxes, inscribed with the names of Damo and Rekia Boyd. (Photo: Sarah Jane Rhee)

While the shutdown was in progress, a young woman climbed up a pole outside the convention center to replace the United States’ flag with an Unapologetically Black flag. The first thing the Chicago Fire Department did when they arrived at the scene was to take down our flag.

Why was it so important for people of color and our white allies to come together and address police brutality – and the idea of policing itself – in this way? To begin with, we need to dig into the root causes of our social problems. What’s a better way to reveal the injustices of the state than to lead a protest and a lock-in while the IACP Conference is happening? Inside the conference, the police chiefs were discussing more strategies and tactics to use against our people. They also were trying to decide if police officers should have more “modern” weapons – weapons that are “stronger” and “smarter.” This is not always a good thing. For example, tasers were first used as an alternative to guns, but the death of people like Dominique Franklin, Jr. (Damo, to his friends), who was tasered in the back of the head and died, shows that police officers shouldn’t have tasers either; in the end, they can do the same damage as a gun would.

Protesters lie down linked to a casket lockbox inscribed with names of men who have been killed by the police. (Photo: Sarah Jane Rhee)

The police already have almost 40 percent of Chicago’s city budget, leaving only 11 percent for education. How is 11 percent going to fund Black and Brown futures? The reason that we have a low number of Black and Brown college graduates and the Chicago Public Schools are underfunded is because so much of the city’s money is going to the police. Meanwhile, police officers are killing innocent people and destroying their futures.

At the action on Oct. 24, names of Black lives that were taken by the police, like Damo and Rekia Boyd, were displayed on the lockboxes. Their lives were taken over a bottle of liquor that was stolen from a multimillion dollar company (in the case of Damo) and for going out to have a good time with friends (in the case of Rekia). The police officers that murdered these Black lives still have their jobs and are still being paid with our tax money, the money that should be going to schools to fund Black and Brown futures.

Police brutality is nothing but a way to try to disguise racism behind a gun and a badge. Police are a tool of white supremacy, a tool used to justify the killing of Black and Brown people. Police are the tools of the weak. They don’t need our tax money and 40 percent of our budget to take Black lives.

As part of the action held on Oct. 24, a press release from BYP100 and other organizing groups was released, with a list of demands. Here are a few:

We demand all local, state and federal budgets to defund the police and invest those dollars and resources in Black futures. We want reparations for chattel slavery, Jim Crow and mass incarceration. We want to end all profit from so-called “criminal justice” punishment – both public and private.We want a guaranteed income for all, living wages, a federal jobs program, and freedom from discrimination for all workers. We want the labor of Black transgender and cisgender women (unseen and seen, unpaid and paid) to be valued and supported,not criminalized and marginalized.We want investments in Black communities that promote economic sustainability and eliminate the displacement of our people.

These demands are asking for nothing more than basic human rights. The police are trying to keep us silent, but in the end, as Dr. Martin Luther King, Jr. said, “Riots are the language of the unheard.” We will continue fighting until we are heard – until Black lives matter.

So, why did we shut down the IACP conference?

We did this to get free.

We did this to bring more attention to state and state-sanctioned violence. We did this because the people in power in Chicago don’t think Black lives or Black voices matter. We did this for Black liberation. We did this to remind the government that the police get more money than education, and that is not right.

We did this for our ancestors who fought for us!

We will do this until we free us.

Share
Copyright, Truthout. May not be reprinted without permission.
A&#8217;mani Howard

A’mani Howard is a young feminist organizer from her sweet home Chicago. She attends Village Leadership Academy, a social justice-based school. She studies and organizes around state violence against Black women and girls.

Kaleb Autman is a Chicago-based youth organizer and activist. He attends Village Leadership Academy. His work focuses on prisons and detention centers, state and state-sanctioned violence, and racial discrimination and justice.