The U.S. Justice Department issued a memo, first reported Thursday by Matt Zapotosky and Chico Harlan of the Washington Post, in which the federal agency claims that it will end the use of private prisons.

“I am eager to enlist your help in beginning the process of reducing — and ultimately ending — our use of privately operated prisons,” wrote Deputy Attorney General Sally Yates. “As you know, all of the Bureau’s existing contracts with private prison companies are term-limited and subject to renewal or termination. I am directing that, as each contract reaches the end of its term, the Bureau should either decline to renew that contract or substantially reduce its scope in a manner consistent with law and the overall decline of the Bureau’s inmate population.”

The declaration has been met with considerable fanfare among a public weary of mass incarceration. In a country that comprises just 5 percent of the global population, the U.S. is responsible for locking up 20 percent of the world’s prison population.

However, human rights campaigners and scholars of prisons and criminality are greeting the announcement with caution. Christopher Petrella is a lecturer at Bates College who sits on the board of Grassroots Leadership. He told AlterNet, “This is a small slice of a large pie, and I worry that our diagnostic tool is the microscope when it should be a mountaintop.”

While private prisons have been rightfully rebuked for their human rights abuses, they ultimately are not the key driver behind mass incarceration, a point illustrated in the following graph provided by the Prison Policy Initiative: 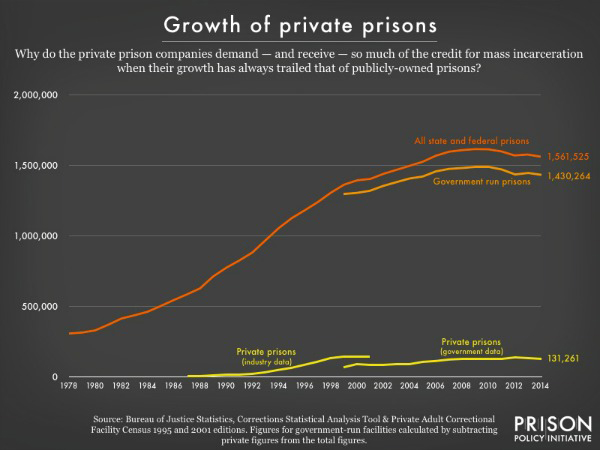 Ruth Wilson Gilmore, professor at the City University of New York and expert in race, prisons and capitalism, pointed out in an article published last February, “Private prisons hold about 8 percent of the prison population and a barely measurable number (5 percent) of those in jails. Overall, about 5 percent of the people locked up are doing time in private prisons.”

In fact, according to the reporting of Zapotosky and Harlan, the directive is “limited to the 13 privately run facilities, housing a little more than 22,000 inmates, in the federal Bureau of Prisons system.”

Gilmore argued that, to truly take on the horrors of mass incarceration, it is necessary to take on public prisons. “What kind of future will prison divestment campaigns produce if they pay no attention to the money that flows through and is extracted from the public prisons and jails, where 95 percent of inmates are held?” she posed. “Jurisdiction by jurisdiction, we can see that contracts come and go, without a corresponding change in the number or the demographic identity of people in custody. In addition, many contracts are not even held by private firms, but by rather municipalities to whom custody has been delegated by state corrections departments.”

For-profit immigrant detention centers, some of which house mothers with their children, have been rocked by repeated protests and hunger strikes against inhumane conditions.

Bethany Carson, immigration researcher and organizer for Grassroots Leadership, told AlterNet, “We believe that the DOJ should sever all contracts with for-profit prisons.” Grassroots Leadership found in a report last year that the private prison industry has played a critical role in driving harsh and inhumane immigration policies. The organization’s report, titled “Payoff: How Congress Ensures Private Prison Profit with an Immigrant Detention Quota,” found:

In 2009, in the midst of a multi-year decline in the undocumented immigrant population,[1] Senator Robert Byrd (D-WV), then Chairman of the Appropriations Subcommittee on Homeland Security, inserted the following language regarding Immigration and Customs Enforcement’s (ICE) detention budget into the Department of Homeland Security Appropriations Act of 2010: “…funding made available under this heading shall maintain a level of not less than 33,400 detention beds.”[2] This directive established what would become a controversial policy interpreted by ICE as a mandate to contract for and fill 33,400 (increased in 2013 to 34,000)[3] detention beds on a daily basis. The directive would come to be known as the “immigrant detention quota” or “bed mandate.” The immigration detention quota is unprecedented; no other law enforcement agency operates under a detention quota mandated by Congress.

In her memo, Yates proclaimed that private prisons “do not provide the same level of correctional services, programs, and resources; they do not save substantially on costs; and as noted in a recent report by the Department’s Office of Inspector General, they do not maintain the same level of safety and security.”

According to Petrella, “the language reads like private prisons don’t provide the same level of correctional services and don’t maintain the same safety and security. That’s a very conservative framework within which to house an ostensibly progressive intervention. It tacitly forces a law-and-order paradigm and reinforces the legitimacy of public prisons.”

“By a law-and-order framework, I mean the rhetorical strategies that shore up broad-based support for continued criminalization of marginalized communities in this country,” Petrella continued. “Shifting populations does nothing to disturb that paradigm at all. If anything, it reinforces the paradigm by allowing white moderates and liberals to pat themselves on the backs and inoculate themselves of guilt.”

Announcement Has Not Curbed Prison Profiteering

It is too soon to determine exactly how the new directive will play out, particularly given that it does not apply to existing contracts and it is not yet clear what it will mean to “substantially reduce” contracts.

Prison profiteering extends into both public and private prisons, in an industry where ankle monitors and prison phone calls bring windfall profits. While private prison stocks have taken a nose dive following the DOJ announcement, Petrella thinks they will bounce back. “I am unconvinced that that is the new normal for them,” he said. “They will probably announce a new venture over the next month or so.”

Some human rights campaigners are greeting the DOJ’s announcement with cautious optimism. “We must end prison profiteering as a part of mass decarceration and reconciliation,” Danielle Chynoweth, organizer with the Center for Media Justice, told AlterNet. “The DOJ’s decision is a great first step. But we also need to take on auxiliary services like the private prison phone industry that to this day continues to fight reasonable regulation of phone call costs. As part of the Campaign for Prison Phone Justice, we have worked for over a decade to keep families connected. Because of industry blockades, many families are still waiting for phone justice.”

Others warn that it is dangerous to overstate the accomplishment. “This is another example of a more symbolic prison reform, which is what the prison reforms of the last few years have been,” Dan Berger, the author ofCaptive Nation: Black Prison Organizing in the Civil Rights Era, told AlterNet. “It makes a difference to some people’s lives, but it is nowhere near the sweeping and realizable changes that are needed.”