By
David Rosnick,
Center for Economic and Policy Research

Revisions of March and April numbers show much slower pace of job creation than originally reported.

The economy added 69,000 jobs in May—short of the 90,000 jobs needed to maintain pace with growth in the labor force. With downward revisions to previous months’ payroll survey numbers, employment in May was only 20,000 above the previously reported estimate for April.

Within the private sector, employment in goods production fell 15,000, including a loss of 28,000 jobs in construction. Over the last three months, the number of construction jobs has fallen by 47,000 in part due to higher employment during the unseasonably warm winter.

Manufacturing added only 12,000 jobs in May, but this may reflect an incomplete seasonal adjustment, as job growth in manufacturing has been relatively strong in the early part of each of the last three years only to slow in subsequent months.

The private service sector added 97,000 jobs, including 9,200 in temporary help services. Temporary help should pick up prior to employment in general, but only 7,700 net jobs have been created in this area since February.

Similarly, transportation and warehousing added 35,600 jobs in May, but only after a loss of 16,900 the month prior. Over the last three months, this sector has created only 8,400 jobs per month and on average the workweek has fallen by half an hour in this sector over the last year.

As expected, the household survey showed general increases in unemployment after last month’s large fall in labor force participation. Since January, the rate of unemployment has fallen from 8.3 to 8.2 percent while the employment-to-population ratio (EPOP) has ticked up 0.1 percentage points to 58.6 percent. Though the EPOP is nearly at its highest level since September of 2009, it was 63.0 percent five years ago.

The participation rate for adult men rose 0.3 percent along with the rate of unemployment, largely a correction from April. Since January, their participation rate is unchanged, but the EPOP among adult men has fallen to 67.5 percent—compared to 67.7 percent four months ago. On the other hand, the EPOP for adult women rose 0.2 percentage points to 55.1 percent—0.4 percentage points higher than January.

The EPOP for black adult women fell a full percentage point to 55.1 percent— returning almost all of the gains since February. In contrast to their white counterparts, this group had seen increasing employment rates in recent months and it is unclear how different labor market outcomes have actually varied.

Overall, this month’s report is disappointing, though not surprising. With the warm winter advancing employment growth earlier in the year, payroll numbers were bound to be low, while the return to growth in labor force participation arrested the fall in the unemployment rate. Even so, unless the economy picks up, producing jobs at a much higher rate, it is difficult to see how unemployment will be anything but persistent for some time. As it currently stands, the economy is still recovering at a slower pace than the previous four recessions. 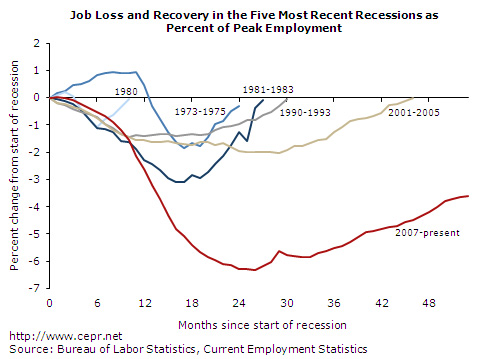