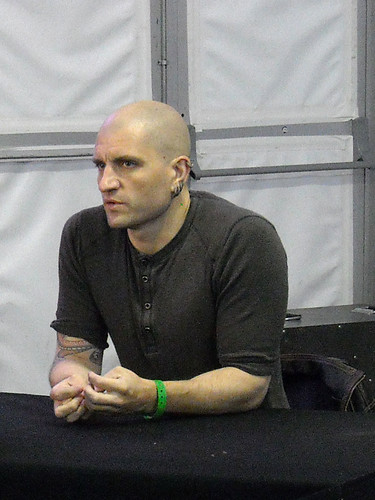 China Miéville. (Photo: Nelson Cunnington/Flickr)In the second part of our interview with author China Miéville, he talks about why the left’s mission isn’t to reveal truths or shake people’s illusions, and why we’re likely to see an increase in “crisis fiction” from writers of all political stripes.

OCT: Talking about feeling on the verge of something, it seems as if from the financial crises onwards, the idea of crisis and collapse has come back into the political discourse in a way that affects people who weren’t talking about it before. Even reformists have suddenly become very concerned with crisis and collapse.

A lot of your books involve a city or a society going through a crisis so that things are different afterwards. It’s usually not the emergence into anything utopian. What opportunities do you see in the current burgeoning new level of crisis for a collapse that’s just fundamentally awful or for a transformation that’s in some ways beneficial?

China Miéville: I am generally skeptical of the notion that sees crisis as an opportunity in any narrow way. There is sometimes talk about “finally things have come really brilliantly to a catastrophic head so after this, us.” Never say never, but the likelihood is just as much of complete disempowerment, complete reaction, a sense of complete inability to impact history. I don’t think there’s any kind of reductive reading of “out of a crisis comes a wave of radicalism.” It would be great if that were the case, and sometimes radicalism comes out of crisis. It entirely depends on the social context, it depends on the strength of the left, it depends on the way people are intervening and so on. It’s also a question that can only be answered through the doing, through the changing.

It’s also the case that out of the crisis comes the right, so it would be dangerous and irresponsible to give a generalized answer. If you look at what’s been going on in Greece, you’ve had both of those tendencies embedded very much at the same moment, so you had this enormous, absolutely unprecedented rise of the left, and at the same time you’ve also seen Golden Dawn, a kind of openly Nazi party, doing very uncomfortably well.

Then if you look at the American context, it has a very different, in certain ways a more muted resonance, although obviously Occupy’s had a very important impact. But you don’t have nearly as much of a strong interventionist, if you like a sort of mainstreamed radical tradition.

OCT: In the States now, the ability of center-left and liberals here to get swept up into electoral politics means it seems like there isn’t going to be any intervention. Any intervention is perceived as just weakening Obama’s chances for reelection.

CM: It’s the usual act of political moral blackmail around this time of the cycle.

In Britain, there’s very much a sense that potentially a radical intervention could be incredibly fecund right now but it’s also fair to say that we struggle to get that right, we have to really, really work. There’s an opportunity and we must take it, but taking it is not always the easiest thing.

CM: To be glib, my answer would be “yes” – it is both of those things. But in terms of this notion of an end to illusions, I would want to question the paradigm that is adhered to by some on the left, which is that once we shake the illusions of this or that group, then real change will come. I don’t think illusions are the problem. I think this is a discourse we’ve inherited from the late Sixties and it was always an exaggerated discourse, but to the extent that it ever had any truth to it, it has very little truth now.

Most people who are in any way engaged have remarkably clear ideas about what exactly is wrong. Most people know perfectly well – perfectly well – that the corporations are not their friends, that the police act in a particularly brutal manner, that government will always prioritize profit over need… I don’t think this is a revelation. I don’t think our job on the left is to prove this to people, I think that job’s done, that’s old news.

There are certain ideological shifts: One of the things I’m eternally thankful to Occupy for, one thing I think it did very effectively, was to start to talk about tax and tax evasion and shift that agenda in the US, which I know still has a long way to go. My feeling is the attacks on Romney over tax would not have had the traction they have had, had it not been for Occupy (that is, I hope it is clear, not a kind of Democrat partisan point). So I’m certainly not saying that there can’t be shifts in what propaganda is effective, but I do not think this is a question of needing to reveal truths to people, and in an era of the internet and cellphone cameras and bloggers, I think our ability to reveal truths is next to none.

This is strategically important: there’s the idea that we are some kind of elect who know the truth and if we can just communicate that, the masses will hear us and rise up, but I think the masses are at least as perspicacious as we are. Much more of a point is that there is this incredible structural disempowerment, and that disempowerment is not illusory, it is a real thing. So to me a much more important job of any radical movement than “telling the truth” is enabling ordinary people to feel a) like they fucking matter, and b) like they can have an impact.

In the UK at the moment, there is a very strong and aggressive agenda being perpetrated to persuade people of the opposite: that they are nothing, that they are dust. There is a lot of fightback against this, but psychically it takes its toll. The agenda is more open and aggressive than it has been for a time, and I really feel suspended, I feel that we are trembling on something.

We have the potential for there to be a shift in people’s sense of empowerment – what we need is a couple of really big social and political and economic victories – or there is a real danger of the opposite, of a massive retrenchment, of a sense that nothing matters, as you got after the defeat of the miners’ strike.

So I’m nervous: The stakes are fucking high, and I am the opposite of complacent. This is a really bad time and I don’t in any way take it for granted that we’re going to come out of this well. It’s too close to call at the moment whether it’s going to simply lead to collapse and the triumph of a kind of rampant Thatcherism. I’d be lying if I said I was particularly buoyed up at the moment.

OCT: If you read your novels from the point of view of someone who’s on the left and has an awareness of your politics, it’s impossible not to notice certain ideas playing out. There’s a line in Embassytown, “politics finds you” – that’s something that seems to happen in the books, with maybe a couple of exceptions. When you’re talking about that sense of urgency and the sense of having a role to play, are you ever tempted to be more didactic, or do you see that and your non-fiction writing, organizing and activism as two separate things?

CM: Didactic, certainly not, because it would be strategically absurd and because it’s not what I write or read fiction for – I just don’t think fiction works that way. But mediation and expression in some kind of fractured way is not only quite a different thing, I think it’s inevitable, and I’m fine with that, some books more overtly and self-consciously than others.

That urgency, that kind of trembling sense is going to penetrate art and fiction and music in various complicated ways as it always must. And those of us that write with anything approaching a kind of political hinterland may well do so more self-consciously than others.

When we think about reflecting and drawing from and ruminating on and metaphorizing and considering, that’s all terrific. When we start thinking about sending a message, let alone teaching, we’re on a hiding to nothing, both as activists and as writers. That’s simply not our job in that context – if I want to tell people what I think about politics I’ll simply do so. But if you read the fiction with that lens, of course you’re going to find that stuff there, and I’m not going to disavow it – it’s an important part of who I am and what motivates me to get up in the morning, let alone to write books.