On a Saturday in September, more than 125 volunteers showed up with tools in hand and built six new 16-by-20-foot houses for a group of formerly homeless men. It was the beginning of Second Wind Cottages, a tiny-house village for the chronically homeless in the town of Newfield, N.Y., outside of Ithaca.

On January 29, the village officially opened, and its first residents settled in. Each house had cost about $10,000 to build, a fraction of what it would have cost to house the men in a new apartment building.

The project is part of a national movement of tiny-house villages, an alternative approach to housing the homeless that’s beginning to catch the interest of national advocates and government housing officials alike.

For many years, it has been tough to find a way to house the homeless. More than 3.5 million people experience homelessness in the United States each year, according to the National Law Center on Homelessness and Poverty. Shortages of low-income housing continue to be a major challenge. For every 100 households of renters in the United States that earn “extremely low income” (30 percent of the median or less), there are only 30 affordable apartments available, according to a 2013 report from the National Low Income Housing Coalition.

But Second Wind is truly affordable, built by volunteers on seven acres of land donated by Carmen Guidi, the main coordinator of the project and a longtime friend of several of the men who now live there. The retail cost of the materials to build the first six houses was somewhere between $10,000 and $12,000 per house, says Guidi. But many of the building materials were donated, and all of the labor was done in a massive volunteer effort.

The village will ultimately include a common house, garden beds, a chicken coop, and 18 single-unit cottages. 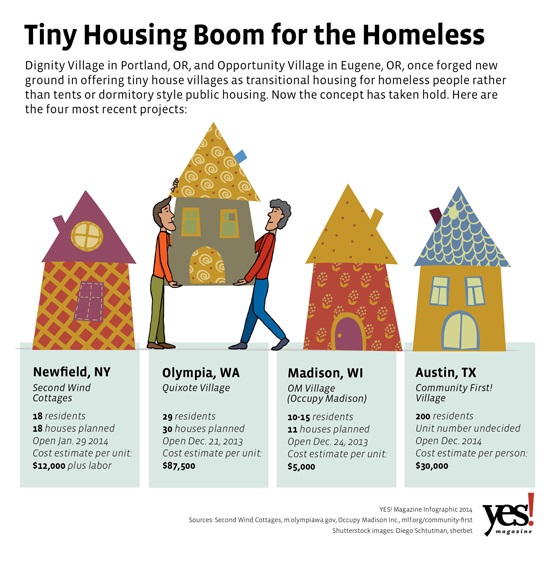 “The typical development for extremely low-income housing is trending up toward $200,000 per unit. That’s a lot of bills,” says Jill Severn, a board member at Panza, a nonprofit organization that sponsors another tiny-house project called Quixote Village. (The organization’s name is a play on Sancho Panza, Don Quixote’s sidekick in Miguel de Cervantes’ classic novel.)

Quixote Village opened in Olympia, Wash., right before Christmas. But it began in February 2007 as “Camp Quixote,” a protest held in a city-owned parking lot. A group of homeless people assembled there to oppose an Olympia ordinance that made it illegal to sit, lie down, or sell things within six feet of downtown buildings. When police evicted the campers eight days after the protest began, the Olympia Unitarian Universalist Congregation stepped in to help, offering temporary refuge on their land.

For five years, the camp’s location rotated, moving and reassembling every 90 days at one of several different local churches. Panza was formed by a corps of volunteers from the faith communities assisting the camp, and the organization worked with the city council to secure and rezone a parcel of county-owned industrial land near a community college and create a permanent site for the village. In December of 2013, the residents of Quixote Village settled into their new homes there.

Quixote Village has fostered a positive relationship between its residents and local government and police, says Severn. Despite this, the project was held up in court for a year by a local organization of businesses and landowners called the Industrial Zoning Preservation Association, which cited concerns over the potential impact on local businesses in a nearby industrial park.

Panza used the time to fundraise and build an outreach campaign to win over the public. They had the support of legions of volunteers, mostly from local churches, who had staffed the camp.

“Having hundreds of [residents] get to know people that were homeless made a huge difference in the success of getting this off the ground,” says Severn.

Today, the 30 structures that make up Quixote Village are home to 29 disabled adults, almost all of whom qualify as “chronically homeless,” by the standards of the U.S. Department of Housing and Urban Development.

The residents also have a common space with shared showers, a laundry, garden space, and a kitchen. By sharing these amenities, the community was able to increase the affordability of the project and design a neighborhood they believed would fit their needs and make them more self-sufficient.

The shared space has also helped them create a supportive community. The residents, who are self-governed, have developed a rulebook that prohibits illegal drugs and alcohol on the grounds and requires that each member put in a certain number of service hours per week. They meet twice a week in the evenings to discuss problems or concerns and to share a common meal that they take turns cooking.

The cost of units at Quixote Village is significantly higher than at Second Wind—about $88,000 per unit—but that’s still less than half the cost of the average public housing project, according to Nan Roman, president and CEO of the National Alliance to End Homelessness. Quixote has had access to state funding and local community grants, as well as private funding from individuals, businesses, and two Native American tribes. The project also received a Community Development Block Grant for $604,000 from the State of Washington Department of Commerce and a $1.5-million grant from the Washington State Legislature.

Many other tiny-house projects are just beginning to get of the ground, raise money, find land, and gain approval from local officials and members of the public. But the unorthodox nature of the small houses presents unique legal zoning limitations and barriers that limit where tiny houses can be stationed.

In Madison, Wisc., Occupy Madison has been facing this very challenge, as the group forged ahead with plans for a tiny house village.

In the spring of 2011, prior to the launch of the Occupy Wall Street movement, a series of protests at the Wisconsin State Capitol—focused on the state’s controversial anti-collective-bargaining bill—prompted additional legislation that prohibited groups from gathering without a permit. When the protests joined forces with Occupy in the fall of 2011, this created a unique opportunity for the voices of the many homeless people in Madison to be heard.

“There were some great moments throughout the Occupy movement where a lot of dialogue was going on between the people without homes and the people with homes,” says Allen Barkoff, one of the board members of Occupy Madison, Inc., a nonprofit formed in December 2012 to address the need for legal places where homeless people in Madison could congregate and stay safe. The organization first looked into buying an apartment building or a shared house for the homeless but ultimately settled on tiny houses as the most flexible and economical way to create homes for people.

In this case, the cost of building the tiny homes comes to around $5,000 each, funded by private donations and an online crowd-funding campaign. The nonprofit also plans to apply for some city grants. Each home will come with a propane heater, a composting toilet, and an 80-watt solar panel array—and will be about 98 square feet in size, 99 if you include the porch. (The volunteers enjoy the joke: “We are the 99 square feet!”)

But the question of where the houses can legally be located is still up in the air. Volunteers are now building houses for six people. Because of a recent ordinance change, the houses are allowed to sit on church property in groups of three. City regulations also permit them to be placed on the side of the road, as long as they are relocated every 48 hours. But Madison’s snowy winter makes the houses hard to move, explains Barkoff.

Now Occupy Madison, Inc., is in the middle of a lengthy process to purchase a parcel of land on the east side of the city to accommodate 11 houses, along with a central building (a converted gas station) that can serve as a workshop for making more homes. This spring, they will continue to hold neighborhood meetings about the project, talk with police, and work with the Madison Planning and Development Department—and, eventually, the city council—to negotiate zoning issues for the village.

The real cost of homelessness

Efforts to break through the red tape and raise money to house the homeless almost always pay off for a community. Even the most expensive tiny-house projects—such as a new, ambitious $6-million campaign to build a 200-person tiny-house park this year in Austin, Texas—can’t rival the cost of homelessness to taxpayers, which was more than $10 million per year in Austin, for example, as YES! reported in December 2013.

“Chronically homeless people—people who have disabilities and are homeless for long periods of time—can be very expensive to systems of public care,” explains Roman. In 2007, the National Alliance to End Homelessness compiled three studies showing that it costs the same or less money to provide permanent housing as it does to allow people to remain homeless. In Denver, Colo., a housing program for the homeless reduced the costs of public services (including medical services, temporary shelter, and costs associated with arrests and incarceration) by an estimated $15,773 per person per year, saving taxpayers thousands of dollars.

Government officials and city planners are beginning to see the tiny-house village as one viable solution for addressing homelessness.

“It’s certainly something that we would encourage other communities to take a look at when it comes to creating solutions for housing the chronically homeless,” says Lee Jones, a spokesperson for the U.S. Department of Housing and Urban Development. “It’s a very important step in terms of the kinds of services we should be providing to people that need assistance.”

Currently, the various efforts to house the homeless in tiny-house villages comprise a small and pioneering movement: But each new project helps create lessons and a model for other communities.

For example, Quixote Village, as a recipient of state funding, is considered a “pilot” project: It is required to report its progress to the state legislature in five years. In the meantime, says Severn, the residents will be settling in, putting in garden beds, building a carpentry workshop, searching for jobs, and simply living their lives.

“One of our residents has been homeless for about 25 years,” Severn says. “He told me he’s excited to start a little rose garden. It really touched me to hear that.”

Erika Lundahl is a freelance writer living in Seattle.

Truthout
Share
A growing number of towns and cities have found a practical solution to homelessness through the construction of tiny-house villages - and housing officials are taking notice.
Economy & Labor