The whole US health care system is broken, but Medicare isn’t what broke it. Medicare is the glue that holds it together. Without Medicare, the whole system would have collapsed long ago.

Most people understand Medicare as an insurance system for seniors. You turn 65, you get Medicare. Without Medicare, millions of senior citizens wouldn’t be able to afford health insurance.

In reality, Medicare is an insurance program for hospitals. Hospitals can’t legally or ethically refuse to treat dying patients. And the simple fact is that most people who are dying are old.

In other words, by the 1970s, the United States came very close to having universal health insurance. Statistics are not available for the period, but it is likely that over 90 percent of the population was insured, one way or another. Some people still fell through the cracks in the system, but not enough to bankrupt the hospitals.

What’s more, insurance then was much more inclusive than insurance is now. People didn’t face the high deductibles and large co-pays they do today. You got sick, you went to the doctor. For most people, it was that easy.

The result of near-universal health insurance was that by the 1970s, the United States had an efficient, low-cost health care system. Costs were rising, true, but service standards were also rising. In health care, as in everything else, you get what you pay for.

That something else is health care.

As countries become richer, they spend more and more of their national incomes on health care. This is true of all countries, not just the United States. The accompanying graphic uses data from the Organization for Economic Cooperation and Development (OECD) to illustrate the proportion of national income (GDP) spent on health care in seven major countries over the past 50 years. It has consistently risen in every single one. 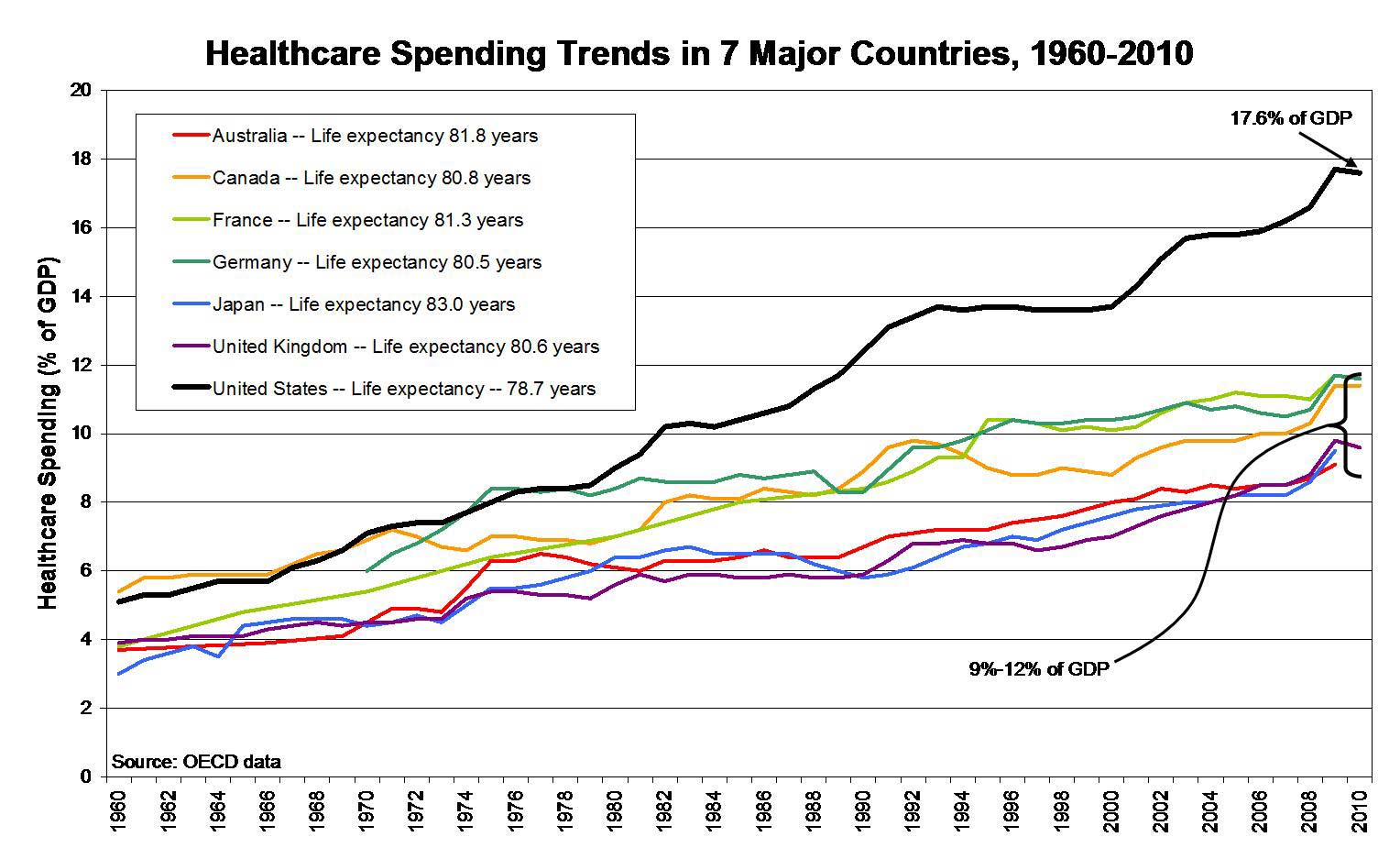 The problem is that health care spending has risen much faster in the United States than in any other country.

Between 1960 and 1980, the US had a normal level of health care spending compared to other countries. It’s only after 1980 that US healthcare costs started to spiral out of control. By the year 2010, the United States was spending 17.8 percent of its national income on health care. Other countries spend between 9 percent and 12 percent.

The difference? In the United States, most people continued to be covered by private insurance, when they were covered at all. In every other major country, government health care systems expanded to cover all citizens. The other countries have a wide range of arrangements for providing health care, but they all share one thing in common: universal coverage.

Only one policy proposal would bring the US healthcare system into line with those in other countries: Medicare for all.

Raising the age for Medicare eligibility won’t reduce costs. As Wall Street Journal columnist Rex Nutting points out, booting 65- and 66-year -olds off Medicare will raise costs by transferring them from cheap public insurance to expensive private insurance – if they get insurance at all.

Slate columnist Matthew Yglesias has run the numbers and concluded that instead of raising the Medicare eligibility age, we should lower it “all the way down to zero.” In other words, we should bring back the public option that was supposed to be the centerpiece of Obamacare, before Obama traded it away for nonexistent bipartisan support.

Another bad policy idea is means-testing Medicare. That would mean making rich seniors pay more for their own insurance. Many Democrats support this option, including President Obama, though Reps. Nancy Pelosi (D-California) and Henry Waxman (D-California) have come out against.

In principle, it sounds progressive to make rich people pay more for insurance. But that’s not what means-testing really means. What it really means is encouraging richer people to opt out of Medicare and buy private insurance instead. It’s the next-best (worst) thing to Paul Ryan’s voucher proposal for Medicare privatization.

Medicare is an incredibly complicated program. Like any government program, it would benefit from updates and tweaks to keep it in line with current research and best practice. But it is universal, efficient and effective. Under current law, its main hospital insurance program is fully self-funded until 2024, after which it may – or may not – need a government subsidy. That doesn’t sound much like a crisis.

Medicare needs saving – but not from runaway costs. The leaderships of both political parties seem intent on raiding Medicare to pay for tax cuts. Business interests want to dismantle Medicare to create more opportunities for private profit. And of course, the entire health care industry wants higher payments from Medicare for its services.

Share
Copyright, Truthout. May not be reprinted without permission.
Salvatore Babones