This stat leaves out a lot of the story. The Federal Reserve Bank of Dallas has promoted the number, but “it acknowledges that the number comes out different depending on whether one compares Texas to all states or just to states that are adding jobs.” Between 2008 and 2010, jobs actually grew at a faster pace in Massachusetts than in Texas.

In fact, “Texas has done worse than the rest of the country since the peak of national unemployment in October 2009.” The unemployment rate in Texas has been steadily increasing throughout the recession, and went from 7.7 to 8.2 percent while the state was supposedly creating 40 percent of all the new jobs in the U.S.

How is this possible, since Texas has created over 126,000 jobs since the depths of the recession in February 2009? The fact of the matter is that looking purely at job creation misses a key point, namely that Texas has also experienced incredibly rapid population and labor force growth (due to a series of factors, including that Texas weathered the housing bubble reasonably well due to strict mortgage lending regulations). When this is taken into account, Texas’ job creation looks decidedly less impressive: 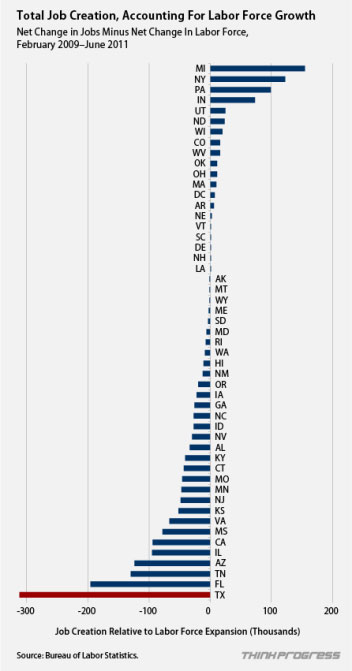 Clearly, there is no miracle for Texas here. While over 126,000 net jobs were created in Texas over the last two and a half years, the labor force expanded by over 437,000, meaning that overall Texas has added unemployed workers at a rate much faster than it has created jobs. And although states like Michigan have lost jobs (29,200 since February 2009), the state’s labor force has shrunk by over 185,000 since then. As a result, while there are fewer jobs, there are significantly less workers looking for them.

As Paul Krugman put it, “several factors underlie [Texas'] rapid population growth: a high birth rate, immigration from Mexico, and inward migration of Americans from other states, who are attracted to Texas by its warm weather and low cost of living, low housing costs in particular.” But they have little to do with Perry’s policies.

Now that certainly doesn’t make the situation in Michigan a good one, as contraction of the labor force is one side effect of the prolonged recession and unemployment there is still 10.6 percent. However if there is a real “miracle” here, it is North Dakota, which has seen over 27,000 new jobs and a labor force expansion of only 3,700, resulting in about 24,000 new jobs for workers who previously had none. But no one is proclaiming the “North Dakota miracle” and saying that Gov. Jack Dalrymple (R-ND) should be running for President.