Betty Osceola, a member of the Miccosukee tribe and Panther clan, has made it her mission to protect the Everglades. The 49-year-old grandmother, who operates an airboat tour company in the Everglades, plans to spend the rest of her life protecting the land of her ancestors for future generations.

Despite millions of dollars spent on conservation in recent years, the Everglades is still threatened by factors including, pollution, invasive species, salt water intrusion, and the ongoing development of South Florida that continues to encroach on indigenous lands.

Yet of all the threats, Osceola sees a proposed bike path that would cut through the Everglades as the most important threat to stop – and she is not alone.

Osceola is part of a growing coalition of Indian tribes, environmental groups, and concerned citizens who are fighting the creation of The River of Grass Greenway (ROGG), a bike path that would connect Naples to Miami. Stopping the bike path is a move to keep what is still wild in the Everglades, wild. 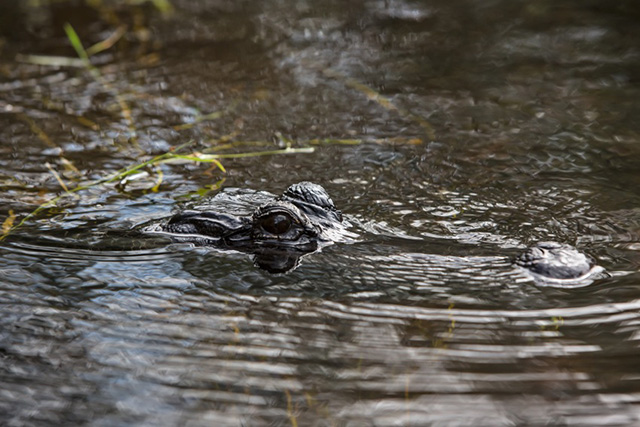 The ROGG was designed to be built along US Route 41, one of two roads that cross through the Everglades. The path, if created, would be a multi-purpose 76-mile-long, 12 to 16 foot wide road that would include restroom facilities and additional loop paths that cut into the Everglades.

Construction of the new path would cut through seven national and state parks, two native reservations, and a World Heritage Site. 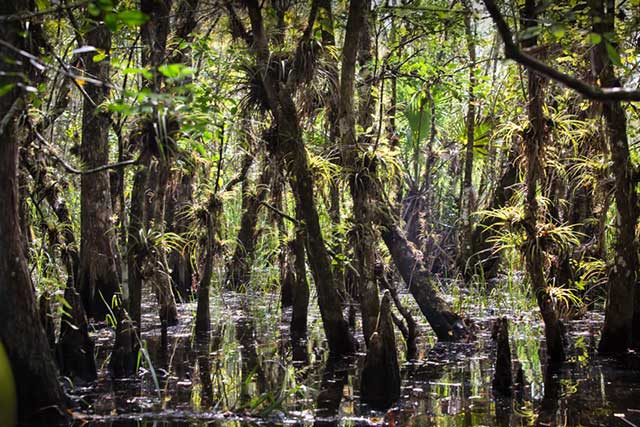 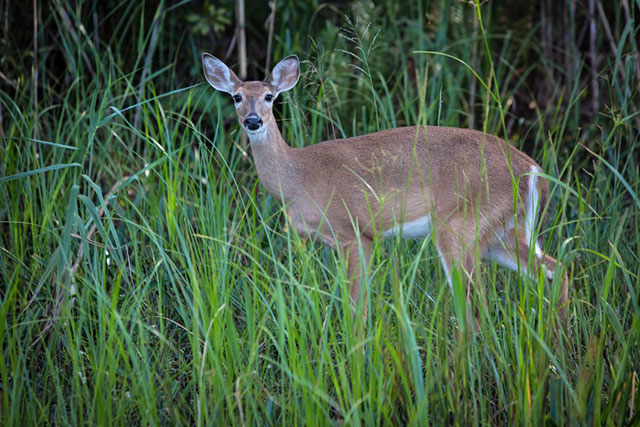 Deer on the side of US Route 41. (Photo: Julie Dermansky)

The coalition’s objections against the project include further destruction of the wetlands, disruption of vital watersheds, fragmentation of critical habitat for endangered species, the further commercialization of the Everglades, encroachment on indigenous land, and desecration of burial grounds. 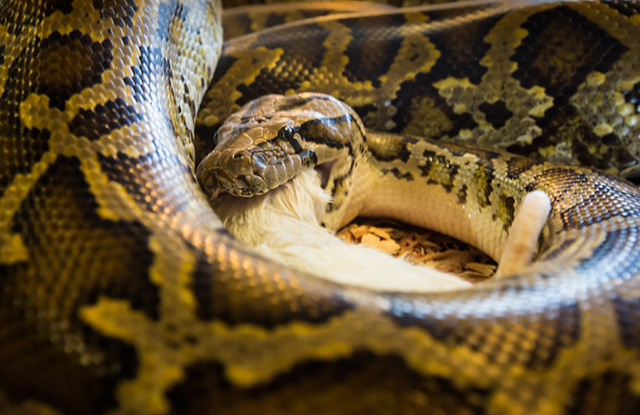 Python captured in the Everglades, at the Skunk Ape Nature Reserve & Research Center in Ochopee on US Route 41. (Photo: Julie Dermansky)

Some also fear that the pathway could potentially open the floodgate to new oil drilling and fracking because the design plans leave open the possibility of incorporating other elements that could include power lines or even pipelines. 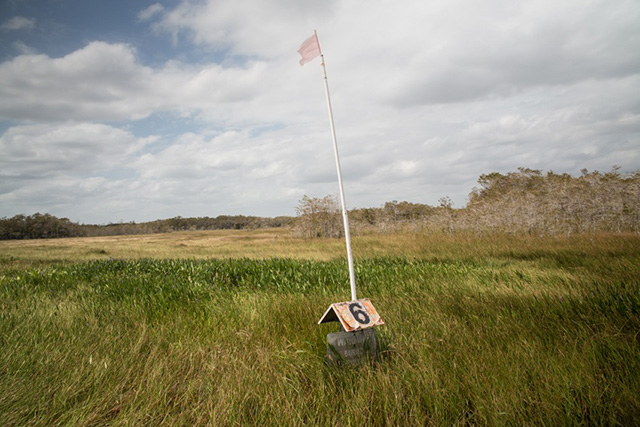 “The bike path is an example of greenwashing at its worst,” Osceola told DeSmog during an airboat tour in the wetlands. “It is being sold as a project to promote stewardship, help conservation, and help Everglades restoration,” but she and others against the project believe it will do the opposite.

“There is no need for anything new,” Osceola said. “Cutting trees to build a road isn’t green. The greenest thing would be to use the bike paths we have already,” she said.

The Miccosukee tribe issued an official comment letter against the ROGG draft plan that includes a list of federal acts it alleges it breaks, including skipping initial tribal consultation before commissioning the feasibility study.

There are now over 400 miles of paved and unpaved trails for hiking and biking already throughout the Everglades, according to a Sierra Club Calusa Group ROGG letter opposing the project signed by dozens of concerned citizens and local business owners located along the route of the proposed bike path.

“Since writing the letter, after further analysis we realized the number of existing trails could be over 800,” John Scott, Chairman of the Sierra Club Calusa Group told DeSmog.

Damage caused by building existing paths was done and paid for decades ago, the letters states, and asking taxpayers to pay the bill for this $140 million project plus maintenance at a rate of $7,500 per mile per year, doesn’t make sense.

The letter concludes, “This project is an unnecessary use of public funds while community benefits are minimal and dubious in value.”

Among other problems the new path will create, the letter argues that the new path will make conditions for those who useUS Route 41 more dangerous. The bike path would eliminate existing shoulder space where locals traditionally stop and fish.

The River of Grass Draft Feasibility Study and Master Plan, released in May by the National Park Service, prepared by AECOMTechnical Services, identifies more than 20 wildlife species that could be affected by the ROGG, including the endangered Florida panther.

According to the Miami-Dade County Parks Department, the final feasibility study, paid for with a $1 million federal grant, will be released by January 2016.

As a decision on the project looms seven years after it was initiated, the ROGG is losing support.

The Naples Pathway Coalition, a nonprofit that advocates for safe roads for bicyclists and pedestrians that originally proposed the project in 2006, withdrew its support. Though the group has not condemned the ROGG, Beth Brainard, the coalition’s executive director, told Broward Palm Beach New Times, that the organization feels its resources are better spent working on other projects.

The Miami Dade Government has a page on its website about the plans for the ROGG that is arguably an endorsement – it doesn’t mention any potential negative outcomes.

DeSmog asked whether the Miami-Dade County Parks, Recreation and Open Spaces Dept. supported the bike path. Mark A. Heinicke, senior park planner and project manager for the ROGG, didn’t answer the question. Instead, Heinicke referred DeSmog to an advocacy group called Friends of the River of Grass Greenway (FROGG) to get more information, and sent a list of “quick facts” about the project that states: “No decision has been made to move forward on this project at this time.”

Maria I. Nardi, chief of Planning and Design Excellence with the parks department would not indicate one way or the other where the department stands. She wrote in an email: “The Parks Department is simply facilitating the Feasibility Study, various path options have been presented, and Federal agencies are responsible for making a final decision on the project.”

Osceola sees the Parks Department’s lack of commitment as a sign the tide is turning against the project.

However, even without the path, the Everglades is still under constant threat. “Today’s Everglades cannot sustain human life in the way it did for our ancestors,” Osceola said. “Now to exist here, you have to bring in food and water. People have been advised not to eat more than one meal of fish caught in the Everglades a week due to the high level of phosphate and mercury pollution.”

Another threat is the expansion of drilling in the Everglades. Oil extraction is already taking place at the Raccoon Point oil fields, inside the Big Cypress National Preserve.

When learning about the project proposal, the word “collocate” made Osceola and others question if the bike path isn’t just a way to get taxpayers to cover needed infrastructure to expand oil and gas operations.

The Parks Department did not comment on what potential elements could be collocated with the ROGG. However, the department has previously claimed: “No part of this study is intended to promote development nor does it in any way analyze or allow for oil or gas exploration.”

But opponents of the project believe companies could stand to benefit by gaining access to the environmentally sensitive areas. Osceola and Scott wouldn’t be surprised at all if Raccoon Point is able to benefit from the building of the ROGG in some way.

Currently under consideration is a proposal by Burnett Oil Company to seismically test 70,454 acres in the Big Cypress National Preserve. Seismic testing is done to determine if recoverable oil exists.

And last year the Dan A. Hughes Company was caught fracking without permission in Naples. The public outcry against the frack job resulted in a local ban against fracking in Bonita Springs, and a bill co-sponsored by Democratic State Senators Dwight Bullard and Darren Soto to ban fracking statewide. But fracking and other forms of well stimulation in the Everglades remains a possibility.

Video: Sen. Dwight Bullard on a fracking ban in Florida.

At a public meeting in Naples ahead of the 2016 legislative session, the public had a chance to comment on new bills dealing with the fracking industry. Republican Congressman Curt Clawson took the floor and thanked those at the meeting for the service they were providing to the state.

Though the oil and gas industry plays a small role in Florida’s economy, speaking out against the oil industry seems to be political taboo for many state politicians, including Clawson.

During a visit to the Everglades on Earth Day, President Obama used the opportunity to take a jab at Florida’s Republican Governor Rick Scott, who prohibited state employees from using the term “climate change.”

“Climate change is threatening this treasure and the communities that depend on it, which includes almost all of South Florida,” Obama said. “And if we don’t act, there may not be an Everglades as we know it. Simply refusing to say the words ‘climate change’ doesn’t mean that climate change isn’t happening.”

Opposition to the bike path peaked in March, when indigenous people and their supporters walked the length of the proposed bike path during a protest to raise awareness to the project. 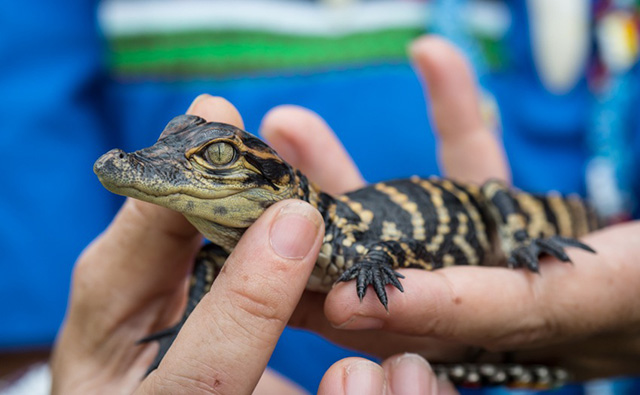 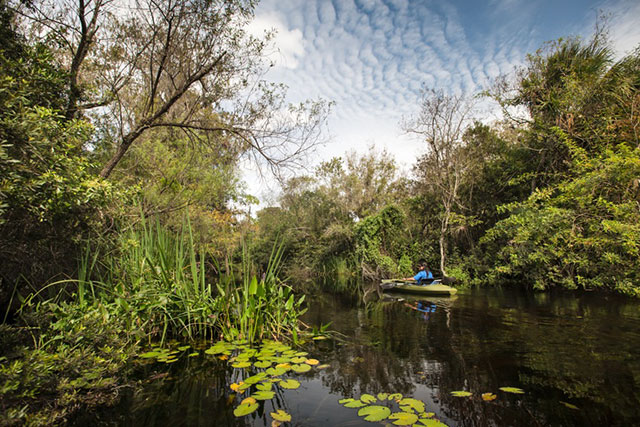 “Traditionally the Florida tribes have wanted to be left alone,” Nicole Williams, a craftsperson and teacher of indigenous descent who took part in the walk, told DeSmog. “But in an effort to protect what is left of the Everglades, that has changed.”

“The Internet has been an important tool for indigenous people across the continent to mobilize against further destruction of the Earth in the fight to stop tar sands use,” she said. “People coming together to fight for the planet is our only hope of saving what is left.”

Yet supporters of the ROGG like Maureen Bonness, a co-founder of FROGG, an advocacy group established to support the project, believes the protest is being led by a “not-in-my-backyard” group of recreational hunters and others who just want the Everglades to themselves, according to the Naples Daily News.

The only claim her organization makes about the project, which those who oppose it don’t dispute, is that it could bring hundreds of thousands more visitors to the Everglades.

“How much population can the Everglades sustain and still keep its wildness?” Oscaola asks. “If you keep taking away from the areas that animals have to live – where are they going to go?” she pondered from atop of her airboat in the heart of the Everglades. “This land can only sustain so much life.” 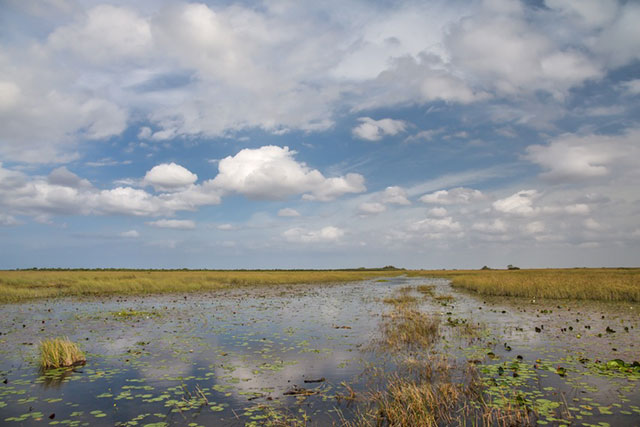